Are the Charmin Bears a reference to Goldilocks and the three bears? As in, Charmin is just right for wiping your bottom?

I was in the minority on this one during a recent conversation. I thought it was a play on “Do bears shit in the woods”

I think you were 100% correct on something so obvious that the people you were talking to must have been morons.

It may have been one or the other when it started, but now it’s just “the Charmin thing”. Advertisements tend to take on a life of there own, usually for the worse.

I have a feeling that it’s both.

I’m pretty sure that it’s a “bear shit in the woods” reference. Also, there are three bears in the Goldilocks story, but the Charmin bear families have five members.

Parenthetical: there are several different sets of Charmin bears, distinguished by color. The blue bears sell Charmin Ultra Soft, and they are all about super comfort. The red bears sell Charmin Ultra Strong, and they are all about feeling clean after you finish your business. And, if you see a set of brown Charmin bears, they are selling Charmin, generally, rather than a particular type. 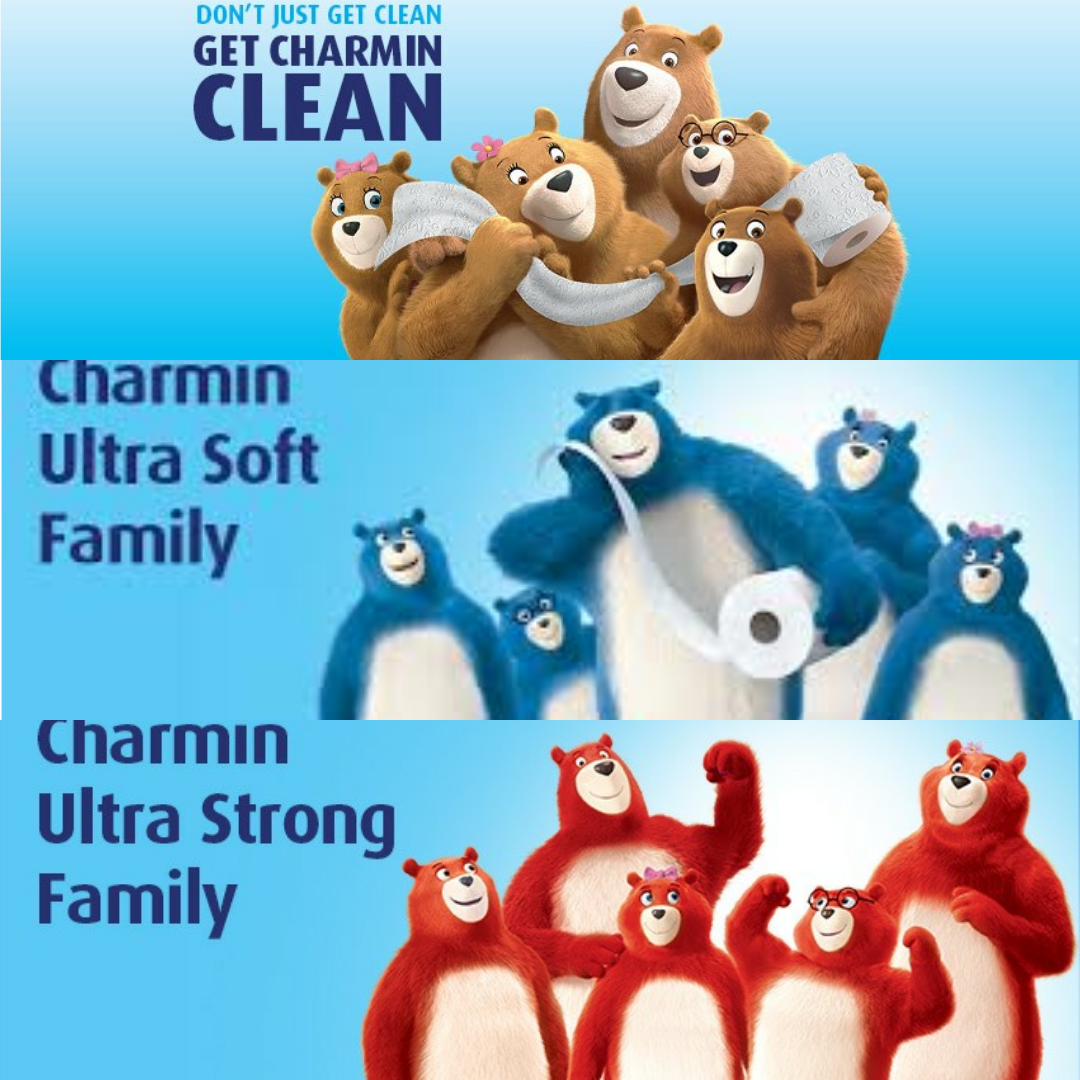 I’m confused. I don’t see any relationship at all between the Goldilocks story and the Charmin bears.

I’ve always assumed it’s a play off the “bears shit in the woods” saying.

Has a worried-looking rabbit ever shown up in the advertisements?

A bear and rabbit are taking a shit in the woods. The bear asks: “Rabbit–does shit ever get stuck in your fur?” The rabbit replies quizzically: “Uh, no?” The bear replies “Excellent” and wipes his ass with the rabbit.

The way I heard it was:

A bear and rabbit are taking a shit in the woods. The bear asks: “Rabbit–do you have a problem with shit getting stuck in your fur?” The rabbit replies quizzically: “Uh, no?” The bear replies “Excellent” and wipes his ass with the rabbit.

Rabbit: “Hey, you got your shit stuck in my fur!”

Bear: “I thought you didn’t have a problem with it.”

A bear and rabbit are taking a shit in the woods.

The only time I’ve heard that joke, it was Chewbacca talking to an Ewok.

I don’t know what that says about my circle, but I like that version better.

+10 or whatever Discourse allows.

That’s silly. They’re referencing it, but not saying it.

I could see them using the Three Bears thing, but I would expect it to show three types of toilet paper: one too rough and course, one too soft and falling apart, and then Charmin. That said, since Charmin has multiple varieties of softness, I’m not sure it would make sense now.

The only time I’ve heard that joke, it was Chewbacca talking to an Ewok.

That joke predates Star Wars by over a decade at least. I remember hearing it in grade school back in the 1960’s.

I’ve voiced my opinion about this ursine dumbassery before, so no further comment on that, but thank you so much for explaining the colors. I thought I was losing my mind one day, thinking “I could have sworn those goddamn bears were blue; when did they turn red?”. Because I don’t /won’t actually pay attention to what they’re saying, it never occurred to me there were different categories. Good god, “ultra strong” ?

The opposing viewpoint was that the Charmin people would never make such a crass allusion to bears shitting in the woods. 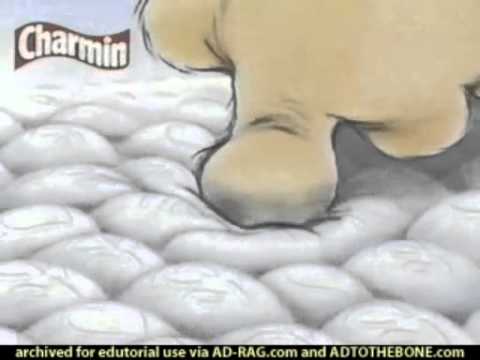 And Costco sells Charmin with slightly bigger sheets, and crows about it on the package. Every time I buy one, I remind my wife: Bigger sheets for bigger s*its!

Thanks for posting. I knew I remembered a commercial that was literally a bear shitting in the woods!

Never thought I would ever miss Mr. Whipple, but every time I see a commercial with any version of those bears I do…

The worst one is the little girl bear gleefully singing about not having shit on her ass.

There have apparently been a lot more of these commercials than I was aware of, and a whole series in Britain that we never saw in the US.

This lead some “fans” of the series to cobble together a terrifying dystopian fantasy centered on the bears.

When people imagine dystopian nightmares, they typically jump to fundamentalist-controlled governments or societies wherein technology has gone too far.

But the most terrifying dystopia on television isn’t The Handmaid’s Tale or Black Mirror . It’s the society portrayed in the Charmin Bears Commercials: a hellscape so deceitfully lighthearted that it airs in the middle of even the family-friendliest programming.

In a recent Charmin Bears commercial, Mama and Papa bear hem and haw over picking up a pair of underwear discarded on the bathroom floor. Enter Junior Bear to save the day. The bespectacled cub slides into the bathroom, picks up his used underwear, and proceeds to brag about the underwear still being clean, singing, “'Cause my heinie’s clean / Oh yeah, I’m Charmin clean,” while exposing his asshle to his smiling parents.
The Charmin Bears have been around since 2000, and throughout the past two decades, their commercials have firmly established a grotesque world order revolving around asshle inspections.

“What is assh*le inspection?” you may ask. Great question.

In the Charmin Bears universe, asshole inspection is a practice whereby bears inspect other bears’ asshles for little chunks of stray toilet paper. Yes, this a real, established, concept in the Charmin Bears canon.
No, I have no idea why they do this, but it can’t be overstated how much of a core element asshle inspection is in these Charmin Bears’ lives. They inspect each others’ asshles constantly . Literally anything Junior does seems to be a perfect excuse for the parents to look at his asshle.
…
The parents are pathological about cleaning Junior’s asshole. Upon spotting the slightest hint of toilet paper, Mama Bear will break out a feather duster, a lint roller, or even a vacuum cleaner, which she then uses to attack Junior’s butt.
They even go so far as to burst into the bathroom while Junior is still inside just to point out the chunks of toilet paper floating around his asshle.
…
While the familial aspects of Charmin-brand asshle inspections are certainly troubling, the cultural aspects are where the true terror lies. As it turns out, it’s not just this one family in Charmin Bear world that’s obsessed with assh*les. It’s everyone.

In one commercial spot featuring Junior hanging out with his friends, we discover that the Charmin Bears’ social hierarchy literally revolves around who has the cleanest asshole. As the boys play video games, one of them brags about how Charmin makes his butt so clean that he can wear his underwear two days in a row. The boys proceed to bully one boy whom they’ve deemed “Skids,” presumably because he leaves sht stains everywhere he goes. Junior and his friends point and laugh at Skids, clearly the lowest on their totem pole because he has the dirtiest assh*le.

(It’s worth noting as an aside that underwear comes up very frequently in the Charmin commercials, and yet none of the bears are ever actually seen wearing underwear. In fact, one might imagine that in the Charmin Bears’ world, wearing underwear might be the equivalent of wearing adult diapers, as it suggests an inability to properly clean one’s asshle.)
But perhaps the starkest and most troubling portrayal of Charmin asshle inspection culture is the airport commercial. In this spot, we witness a TSA agent screening Papa Bear’s asshle for toilet paper scraps before allowing him into the terminal. The implications are horrendous.
What kind of society is this where bears need to have their asshles inspected before they can travel? What series of events occurred before airport asshle inspection was enacted into law? Did a bear board a plane with an overly shtty asshle and accidentally create a medical emergency mid-flight due to the poo poo stench? What else could have possibly happened? Also, the TSA bear is wearing an American flag patch, suggesting that Charmin asshle inspection world is actually America, and we can’t discount the possibility that Charmin is advocating for the real-world implementation of asshle inspection policies.
Perhaps it’s no surprise that in the Charmin Bears’ dystopia, political campaigns also revolve around asshle inspections. To be clear, the blue bear’s platform is “Ultra Soft” on asshles and the red bear’s platform is “Ultra Strong” on asshles. Assh*le inspection is legitimately the only thing in this entire world that any of these bears care about. 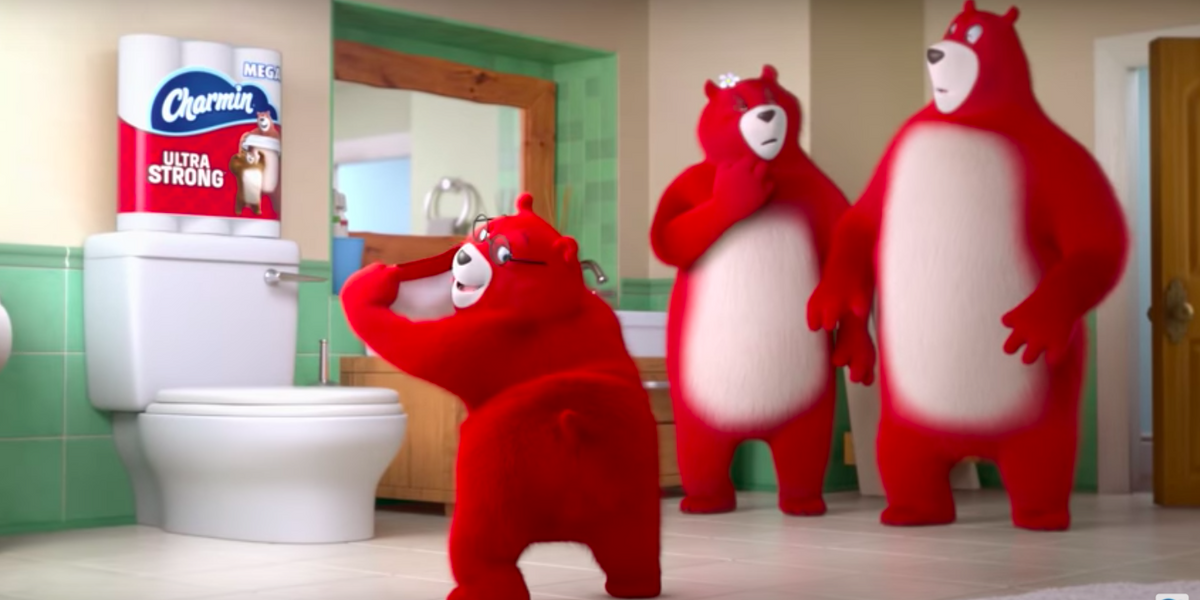 The Assh*le Inspection Hellscape of the Charmin Bears Commercials

The Charmin Bears Commercials portray the most terrifying dystopia ever imagined by humans. In the Charmin world, society revolves around bears constantly inspecting each others' assh*les for tiny bits of Charmin toilet paper. The Charmin Bear...

The Charmin toilet paper bears aren’t just the company’s mascots – they may have their own cleanliness-obsessed society.
In 2020, toilet paper became an unlikely hot topic. As COVID-19 forced society into lockdown, the temporarily scarce commodity became the brunt of many jokes and an item of incredible value. And while this view of toilet paper only rose to prominence recently, commercials for the product have been around forever, with the Charmin bear commercials probably being the most popular. At first glance, these bears seem to be simple mascots of a company trying to make a profit; however, upon further speculation, it seems they have a whole functioning society that’s rather strange.

Reddit user Mykle1984 proposed the theory that Charmin bears live in a world that hides its post-pandemic landscape behind perky tunes and weird new social norms. Their society has passed through an unseen cholera devastation and come out healthy on the other side. Therefore, cleanliness is more than godliness in the faux-bright Charmin society, suggests the Redditor. A clean bear has the right to bear its bare necessities.
The theory was greeted by other users not with snark — well, a little good-natured snark — but with trivia that supports it. The biggest possible piece of evidence is a bizarre 2014 “Airport Security” commercial that quickly went viral. The infamous Charmin family arrives at the transport hub, and their utterly bare ursine patriarch is pulled aside for a more thorough search. “This always happens,” sighs the mother bear, as if the father bear had somehow ended up on an international watch list. 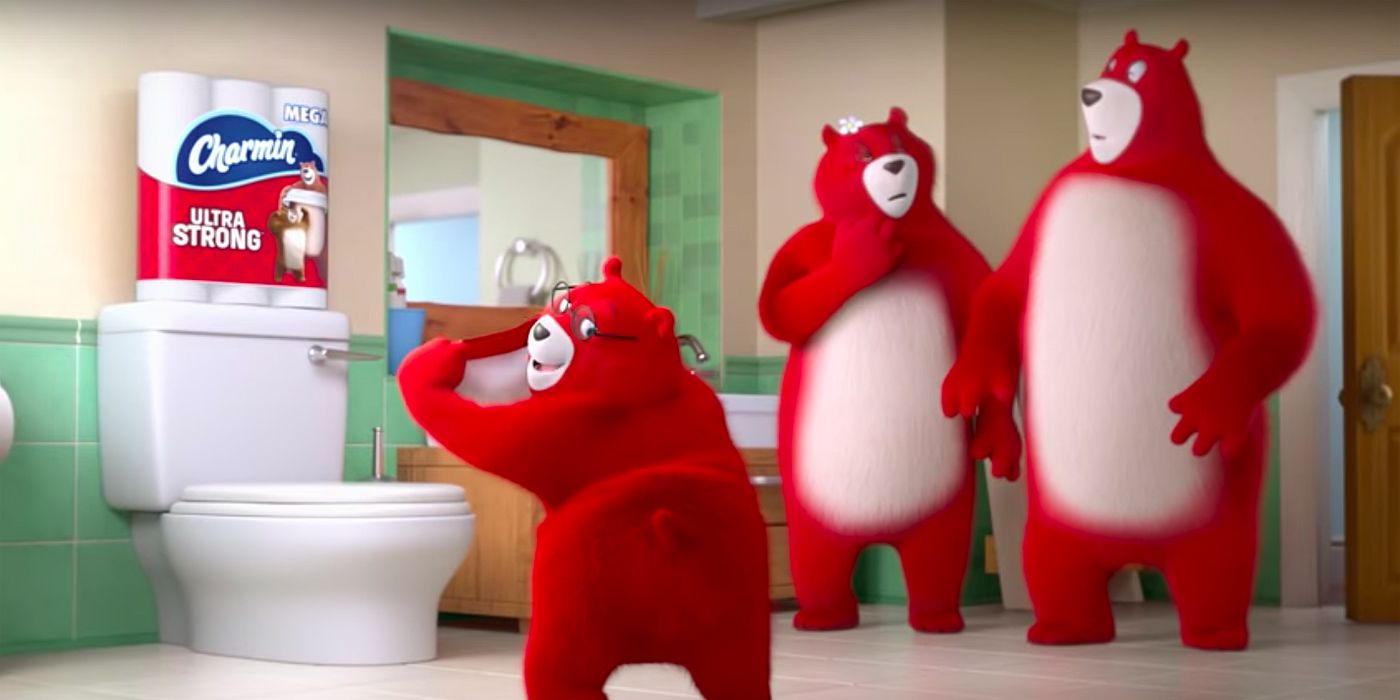 The Charmin toilet paper bears aren't just the company's mascots -- they may have their own cleanliness-obsessed society.