So there is the story circulating about Chinese swimmer Ye Shiwen crushing the competition in the 400m Medley and in fact beating Ryan Lochte’s time in the freestyle portion. Now the performance itself is pretty amazing, but the surprising thing is how Shiwen had never ever shown such a dominance ever before in the event or any swimming event.

So of course there are whispers that she must have been doping, knowingly or otherwise. There is no proof other than the circumstantial evidence presented. So do you think it is likely she doped or do think it is just a remarkable performance that happens every once in a while at the Olympics?

Interesting times. Again, to stress the earlier point, this is an interesting discussion. And the doping aspect is important (don’t shy away from the question just because it’s politically incorrect - look where that got sport before), but this doesn’t prove anything. So let’s wait and see.

If it involves commies, always go with “cheating.”

I have to agree something doesn’t seem right. Swimming is one of those sports where improving by even a second or two is a big achievement. This girl shaved 5 seconds off her best time? :dubious: Plus she significantly beat Ryan Lochte’s time.

Nothing can be done now. It’ll be months before the labs can analyze her samples. Maybe years before they identify what she was given.

I’ll be very surprised if she tests clean and keeps her medal.

This article has a good sidebar listing China’s history of doping. It’s such a shame. 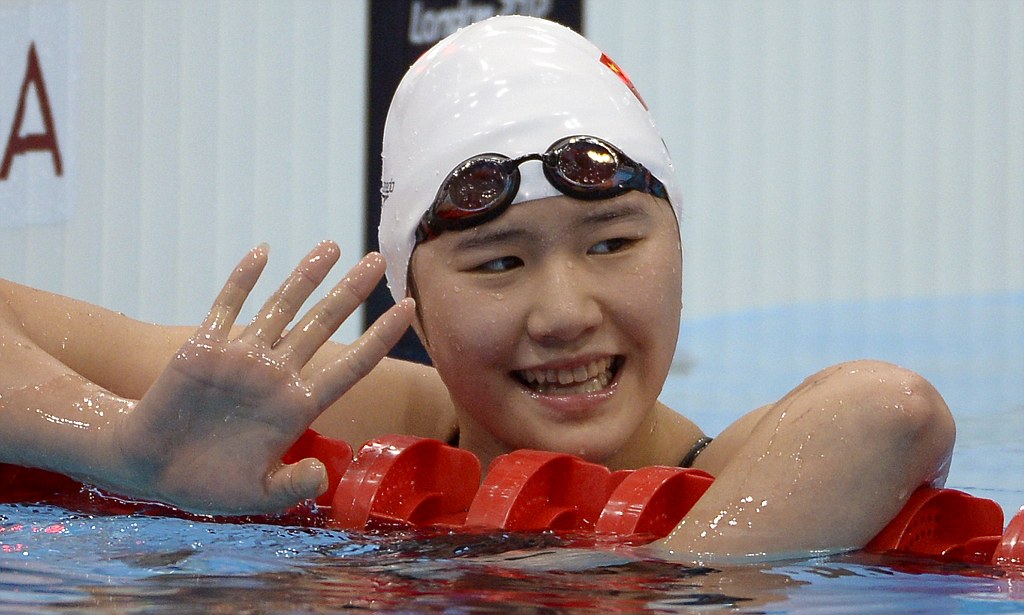 Ye smashed the world record for the women’s 400m individual medley in a time of 4.28.43 - and even swam the final 50 metres faster than U.S. gold medallist Ryan Lochte in the men’s race.

John Leonard, the executive director of the World Swimming Coaches Association and one of the world’s most respected swimming coaches, called the feat ‘flat out impossible’.

His comments come after the unprecedented achievement led BBC broadcaster Clare Balding to question whether Ye had benefited from underhand practices.

He described these last lengths as 'impossible. Flat out. If all her split times had been faster I don’t think anybody would be calling it into question, because she is a good swimmer.

‘But to swim three other splits at the rate that she did, which was quite ordinary for elite competition, and then unleash a historic anomaly, it is just not right.’

Other sports figures agreed the feat was hard to believe, with Australian gold medallist Stephanie Rice calling it ‘insanely fast’.

Merged two threads about the race and the Ye controversy.

What the article says is that she swam the last 50m faster than Lochte did. Her overall time was 23 seconds slower than lochte’s.

That’s what I meant. The last 50m was faster.

She races again Monday. It’ll be interesting to see how she does.

Is it that unusual for a very young swimmer to improve quickly? I’d think at that age there’s a lot of “room to grow”. I mean, at 16 she’s presumably only been swimming with an adult body for a few years, so a few months is a non-trivial chunk of the total amount of time she’s been swimming as an adult.

Maybe the Chinese just finally figured out the perfect combination of dried animal penises and pineal glands to make you superhuman.

This is hardly something only ascribed to Communist countries. When Michelle Smith, the Irish swimmer, came out of nowhere to win three gold medals at Atlanta, lots of people said she was probably cheating. Two years later she was caught cheating. Surprise, surprise.

I don’t really know about the Chinese program. It is certainly not universally the case that all Communist regimes were equal cheaters. The East German Olympic program was essentially a giant cheating industry, an absolute disgrace to sport and a blight on the Olympic record. No East German medal ever won should be considered valid.

But then, I didn’t hear about a huge wave of Polish medallists, though Poland was in the Communist bloc and had a larger pool of talent to draw from.

China, with its huge population, authoritarian government, and vast opportunity for people to end up back in the peasantry if they don’t take such chances as they can get, could easily build up a hell of a powerful Olympic program without having to use drugs.

I wish they could develop quicker tests. They really should have a portable lab at the Olympics to check suspicious or unusual wins. It would be so much fairer to the athlete if this got cleared up quickly. Instead it will be many months or years that this lady will have a cloud over her win.

Whatever happened to the controversy about non-women competing in women’s events? I recall a few Olympics where that was a big deal. They were blood testing and I think even physically checking anatomy on some of those superwomen.

Good article on how Chinese athletes are selected very young and put in training camps.
I’d imagine the old East German and Soviet programs were just as tough. 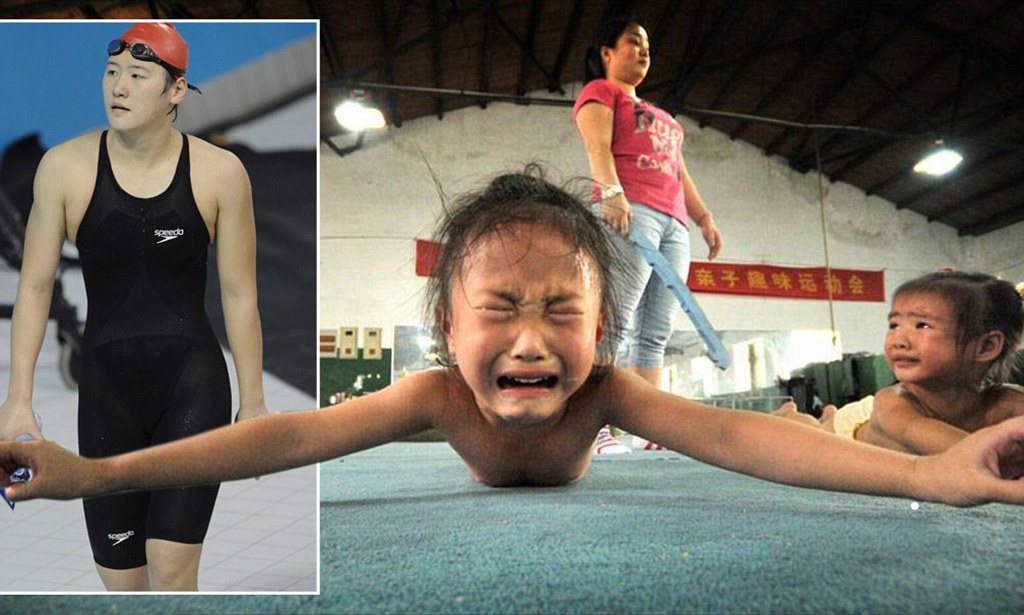 Forging of the Mandarin mermaid: How Chinese children are taken away from...

Ye Shiwen was whisked away at seven to the Chen Jingluin school where young children are driven to success through rigorous regimes and 'brainwashed' into becoming sporting successes.

I’ve sort of had an eyebrow raised at the whole Chinese team’s performance in swimming this year. They’ve never been a swimming power, and now this year, they are winning medals left and right. Something smells a little off. It’s quite possible they just got a generation that increased the talent pool over the last 4-8 years, but it is a little odd that they are suddenly a dominant force.

I did read an article that China has begun throwing serious money at the swimming program to improve training, life conditions, etc for their swimmers, so it may all be on the up and up, but it is a bit odd.

What are the Chinese on the ‘up and up’ about though? Honestly? :dubious:

State sponsored swimming/athletic programs, 1.3 billion people/access to the best coaches and conditions (Chinese swimmers are training in Australia), and you wonder why they are doing well? It might be drugs and I would be the last to swear on a stack of Quotations of Chairman Mao that it is so. Or it might just be a state sponsored sports program with 1.3 billion people and the best get started at 5 years old and train like no one’s business.

In 1993, Chinese women set several distance running record of which three still stand to this day.
Their coach claimed they ate worms as part of their training diet and ran a marathon a day.
Wang Juxia,(3,000 and 10,000m)

In 1995, Wang and her teammates broke up with their coach Ma due to prize money and his harsh coaching style. After a short period of training on their own without a major success, Wang started to train under coach Mao Dezhen to prepare for the 1996 Olympics.

I’ve sort of had an eyebrow raised at the whole Chinese team’s performance in swimming this year. They’ve never been a swimming power, and now this year, they are winning medals left and right. Something smells a little off. It’s quite possible they just got a generation that increased the talent pool over the last 4-8 years, but it is a little odd that they are suddenly a dominant force.

I did read an article that China has begun throwing serious money at the swimming program to improve training, life conditions, etc for their swimmers, so it may all be on the up and up, but it is a bit odd.

To be fair, they’ve been steadily improving for over a decade. They won several medals in Beijing and Athens.

In order to judge this fairly, we should look at footage of her former personal best. If there’s no apparent difference in technique, then it’s alright to suspect doping