Though how Kenny got so good so fast is another question - then again so did the female Eagle Fan (who acknowledges how silly that was).

I enjoy the show as mindless entertainment, but this is easily the worst part of it for me. In this season both the gymnast and the debate (?!?!) girl go from complete newbies to competing in a regional tournament in, what, 3 months? And Kenny can hold his own with Robbie? As someone that has done some recreational martial arts, it was very hard to suspend disbelief for that part.

OK, maybe the worst part was the shirtless tournament fight, but I guess you have to give the audience what they want.

Well, that goes all the way back to Daniel in the original movie, who in a few months (maybe, or maybe just a few weeks) of waxing cars and painting fences goes from absolutely no experience to All Valley Champion.

Finished season 4 today. I agree with pretty much all that’s been said above. The karate bouts are often clumsily choreographed, especially when Daniel is sparring. He clearly has had little training. Some of the kids appear to have had some martial arts experience, and of course William Zabka has had some training. My oldest son has a black belt in MMA, which took him years to achieve, so these kids becoming tournament ready in (seemingly) days is just something one has to actively ignore. Season 4 dragged quite a bit and I fast-forwarded through some of the exposition. Also, the humor has pretty much been leached out of the show as it progresses.

OK, maybe the worst part was the shirtless tournament fight, but I guess you have to give the audience what they want.

I mean, they didn’t repeat it in the Sam/Tori fight, so they didn’t give all the audience what they want.

Also, the humor has pretty much been leached out of the show as it progresses.

I thought this season was actually pretty funny. Daniel is always a bit too serious, but Jonny had some great lines. His “No be there” when Daniel fought the hockey team had me on the floor.

His “No be there” when Daniel fought the hockey team had me on the floor.

I really enjoyed when Johnny said that Daniel should have helped Miagi with his English.

I mean, they didn’t repeat it in the Sam/Tori fight, so they didn’t give all the audience what they want.

There have been so many leering cheesecake shots of Tory in the series that one more wouldn’t make any difference.

Johnny expecting people to speak English in Mexico City next season is going to be hilarious.

I thought this season was actually pretty funny. Daniel is always a bit too serious, but Jonny had some great lines. His “No be there” when Daniel fought the hockey team had me on the floor.

Yeah, it’s not entirely gone, but the tedious conversations have increased to the point where the humor takes a distant back seat.

Most of the humor always seemed to me to be Johnny as a fish-out-of-water. There is really only so far you can go to that well (though him going on a Twitter rant while Miguel was his only follower was great). And Dmitri is always good for a few laughs (the Pac-man suit at prom was fantastic). But the show (and movies) always seemed to be taking itself too serious (which is part of its campy charm) with only a little bit of comedic parts (the movies had Miyagi for that while the show has Johnny).

I thought season 4 was about as much fun as seasons 2 and 3. I’ve enjoyed them all.

But why couldn’t someone have pushed Ralph Macchio into taking iust a little more training? He is by far the worst ‘martial artist’ in the show, and that includes the little kids. Every time he throws a kick or a punch it causes me to wince. He looks like a yellow belt (fairly new student with their first participation belt).

The most unrealistic thing about the tournaments is the amount of contact being allowed. Karate tournaments are either touch-contact only, in which case people don’t wear any protective gear, full-contact to the body only, in which case contestants will wear body pads and hand/foot protectors and contact to the head hard enough to move it is loss of point or disqualifying. All of those kicks to the head with bare feet woukd be disqualifying.

I like how those kids all have black belts now. In real life, I have never seen a black belt awarded in less than three years. Not from a real school, anyway. And the average is more like five to seven years, and some people train for longer and never get one because they just don’t have it in them.

But all that is a side show to the human stories the show is really about, and they are great.

I don’t think they were mentioned in this thread, but there is a whole series of these videos: 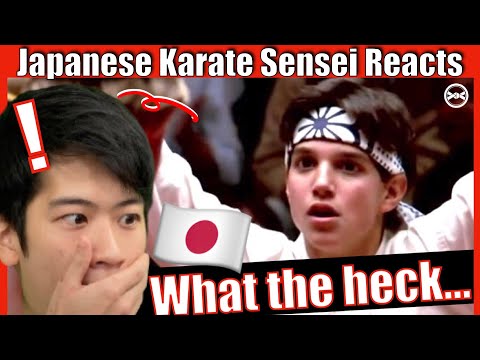