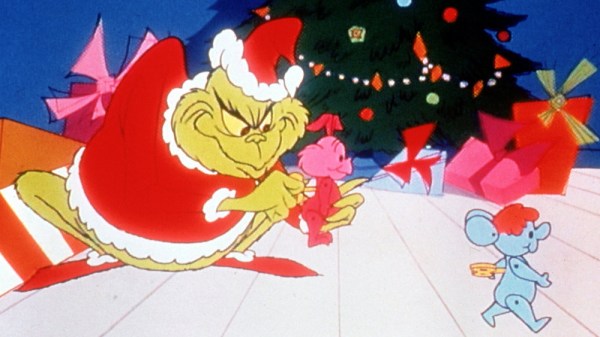 In Virginia, they do not like green eggs and ham, or Dr. Seuss. The good Dr. Seuss, aka Theodor Geisel, has been dropped from the annual ‘Read Across America’ event, a national day to e…

I have the books.

What is says is that, with research, they found “strong racial undertones” in the works. And since this claim is being made by an actual schoolboard, this is likely legitimate research, and not “research” where you just Google things.

Since this article doesn’t in any way present the research or arguments, there doesn’t seem to be a way to determine whether the decision was good or bad. The article itself seems to have an opinion, but said opinion is not backed by any facts.

Instead, the article appears to be making an appeal to tradition, and an attempt to anger-bait its readers who would reflexively agree with their point of view, without any desire to find out the actual truth.

Or, to state it simply: conservative-biased article gets upset over attempts by liberals/progressives to look into racism. News at 11.

It seems fine to me. The Washington Post article that is linked to in the Deadline post says nothing was banned or anything declared racist. This is the relevant statement from the Loundoun schools Wayde B. Byard:

Dr. Seuss books have not been banned in Loudoun County Public Schools (LCPS). LCPS believes that rumor started because March 2 is “Read Across America” day. Schools in LCPS, and across the country, have historically connected Read Across America Day with Dr. Seuss’ birthday. Research in recent years has revealed strong racial undertones in many books written/illustrated by Dr. Seuss. Given this research, and LCPS’ focus on equity and culturally responsive instruction, LCPS has provided guidance to schools in the past couple of years to not connect Read Across America Day with Dr. Seuss’ birthday exclusively. We want to encourage our young readers to read all types of books that are inclusive and diverse and reflective of our student community, not simply celebrate Dr. Seuss. Dr. Seuss and his books are no longer the emphasis of Read Across America Day. That being said, Dr. Seuss books have not been banned; they are still available to students in our libraries and classrooms.

That all sounds reasonable to me. I’m not sure how Deadline came to their understanding, as this article is linked to in their article:

Loudoun County Public Schools explains what it did in regard to Dr. Seuss's books.

FWIW, the racial stereotypes are definitely there in some Dr. Seuss books. I don’t remember much with Black people, but East Asians and Middle Eastern folks gets some pretty fucked-up drawings. And there are so many good kidlit books that aren’t full of racist stereotypes; I’m happy to use those other folks.

I’m not sure how Deadline came to their understanding, as this article is linked to in their article

Oh, I’ve got a strong hunch. “It is difficult to get a man to understand something, when his salary depends upon his not understanding it outraged clicks.”

Are they allegedly canceling Dr. Seuss because of some of this earlier works? Before he began writing children’s books, he was an editorial cartoonist. He did a lot of very clever (IIRC) cartoons that were generally liberal/progressive, with one notable area of exception: His depiction of Japanese people, including Americans of Japanese descent, was consistently hideous and hateful.

Cite: I once had a book discussing his earlier work, including many such examples.

Here is one on his more extreme examples of anti-Japanese war-time cartoonery. Sorry, Discourse can’t display the pic, but that’s okay because I’m going to hide it and make you click twice to see it:

The picture is from this article, which discusses Seuss’s left-ish and liberal cartooning in general, but notes his anti-Japanese bigotry. He frequently satirized the right-wing America First movement. 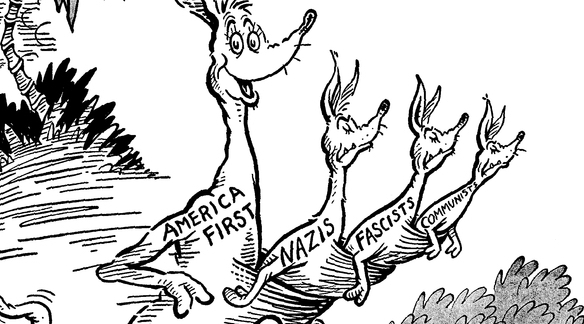 Dr. Seuss has long been a beloved figure of the American experience. Lesser known is his work as a political cartoonist, critizing isolationist policies.

There are a few images in his kids books that are racial stereotypes, like the "Chinaman who eats with sticks" in “To Think That I Saw It on Mulberry Street” and Africans in “If I Ran the Zoo.” But these kinds of images were pervasive at the time.

More problematic are his caricatures of Japanese in WWII and even more so Africans in ads for Flit, an insecticide.

Dr. Suess was a liberal Democrat who opposed fascism in WWII (Yertle the Turtle is a metaphor for the rise of Adolf Hitler, andHorton Hears a Who a plea to accept the Japanese after WWII) and Nixon. He wasn’t a racist himself, although he did use stereotypes common in the 1940s and 1950s.

He did a lot of very clever (IIRC) cartoons that were generally liberal/progressive, with one notable area of exception: His depiction of Japanese people, including Americans of Japanese descent, was consistently hideous and hateful.

More than one exception: he made a series of incredibly racist cartoons about black people, complete with n-words, cannibals, and more.

But his published children’s books contain no Black women or girls (and IIRC no nonwhite women or girls), and out of over a thousand human characters a tiny percentage of nonwhite characters, and those that show up generally show up in stereotypes: “Chinamen” with slanty eyes holding chopsticks, Middle-eastern guys with fezzes who are the cringing servants of wealthy white dudes on safari, and the like.

Tell you what: here’s the study. And here are some significant findings:

In the fifty Dr. Seuss children’s books, 2,240 human characters are identified. Of the 2,240 characters, there are forty-five characters of color representing 2% of the total number of human characters. The eight books featuring characters of color include: ​The Cat’s Quizzer: Are YOU Smarter Than the Cat in the Hat?; Scrambled Eggs Super!; Oh, the Places You’ll Go!; On Beyond Zebra; Because a Little Bug Went Ka-choo; If I Ran the Zoo; And to Think That I Saw Iton Mulberry Street; ​and​ Did I Ever Tell You How Lucky You Are?

Of the forty-five characters of color, forty-three are identified as having characteristics aligning with the definition of Orientalism. Within the Orientalist definition, fourteen people are identified by stereotypical East Asian characteristics and twenty-nine characters are wearing turbans. Characters aligned with Orientalism are sometimes attributed an ethno-racial identity,but are generally situated within a colorblind lens, often from an unspecified nationality, race, or ethnicity. Only two of the forty-five characters are identified in the text as “African” and both align with the theme of anti-Blackness. White supremacy is seen through the centering of Whiteness and White characters, who comprise 98% (2,195 characters) of all characters.Notably, every character of color is male. Males of color are only presented in subservient, exotified, or dehumanized roles. This also remains true in their relation to White characters.Most startling is the complete invisibility and absence of women and girls of color across Seuss’ entire children’s book collection.

He’s got great rhymes and wonderfully evocative illustrations and a sly, anarchistic sense of humor and great lessons about tolerating people despite their differences. He’s also got overwhelmingly white characters, and nonwhite characters are relegated to servile, stereotypical roles. Both things happen at once.

If we lived in a world without Mo Willems and Ezra Jack Keats and Jacqueline Woodson and Jane Yolen and Jerry Pinkney and Kevin Henkes and so many other marvelous children’s illustrators, I’d be more inclined to keep Seuss in the rotation. But for me, his flaws are enough to drag down his gifts to a level that means he’s constantly outpaced by other artists who don’t stumble in the ways that he does.

Are they allegedly canceling Dr. Seuss because of some of this earlier works?

Yeah, but the thing is, they’re not even “cancelling” him. They’re just saying, “hey, in light of some recent scholarship, let’s no longer focus Read Across America as strongly on Dr. Seuss. We’re not saying cancel Dr. Seuss; we’re not saying don’t read him. We’re saying he’s no longer the emphasis of this reading day.” I mean, this is a day celebrating reading, it sure makes sense to me to expand the authors read and not focus just on Dr. Seuss. What’s objectionable about that?

I was reading If I Ran the Zoo to my kid for the first time and oooh there are some nasty racialized drawings in there. It was jarring because I always think of Seuss as innocent kids stuff. I can’t endorse those images by reading that to my child. I’m fine reading him other books by Suess but not anything that exoticizes and makes caricatures of Asians and black people.

I know I’m probably in the minority, but this is exactly the sort of situation where I’d be okay with new editions that changed things. If the only problem is the illustrations, and not the actual text, then altering them somewhat seems valid, as long as the original continue to exist.

It’s not like we don’t release books all the time with illustrations that are different from the original. How many have seen the original illustrations in A Christmas Carol? I know I hadn’t until I got the annotated version for Christmas.

And, yes, I know. People love the illustrations like they love the books. But people have been okay with other works not using things drawn by the author. He didn’t make the CGI or special effects in the movies–they were just based on his works.

Dr. Seuss books are perfect for a young age where discussion of why these things are bad would be difficult, meaning people are more likely to simply not show those works to their kids. That seems a pity to me, when all you might need to do is leave out one character.

(As for the characters being white–that can just be seen as stylistic once any racist caricatures are removed. Dr. Seuss books tend to be in limited color, and not including skin color is normal in that context.)

I was reading If I Ran the Zoo to my kid for the first time and oooh there are some nasty racialized drawings in there.

Not just the drawings:

There’s a lot of positive stuff in Dr. Seuss’s work but every now and then one steps on an unexpected landmine.

I wonder how many more dead people who wrote stuff are we going to hear this about?

OP, that Deadline article is bullshit, since Dr. Seuss wasn’t canceled or banned or removed from the shelves. Early Dr. Seuss was racist as hell, as other people in this thread have pointed out, but he wasn’t “canceled” by Virginia Schools.

If I were you, I’d be embarrassed for posting that article, which was clearly false, and ask for this thread to be closed.

I don’t know why anyone reads articles that are just meant to make you angry over bullshit non-issues.

I don’t know why anyone reads articles that are just meant to make you angry over bullshit non-issues.

Yeah, reading the thread title was a big fucking rolleyes from me, as I knew it was going to be yet another story that mischaracterizes what actually happened. What’s particularly dumb (in regards to the article, not the OP) is, as I mentioned, the article itself posts a link to an article refuting Deadline’s own take on things. It’s bonkers.

Also, how in the heck is this the “Virginia school system,” as in the headline? It’s one county in Virginia – granted, a large-ish one with 450,000 people, but it’s hardly the entire state. Their own fucking article says this. And it’s not even news! The quote from the LCPS representative says they’ve been advising this for a “couple of years” now.