Back when, there was only a single Crayola that had a skin tone name - “flesh”. Everyone else had to make do with “light brown” or “burnt umber” or something. I’m amazed at how long that persisted. A few years ago Crayola came out with their Multicultural set of 8 colors. Not to be upstaged by anyone else Crayola came out with the 24 color set Colors of the World in both crayons and pencils. But, wait! They now have a 32 color version! 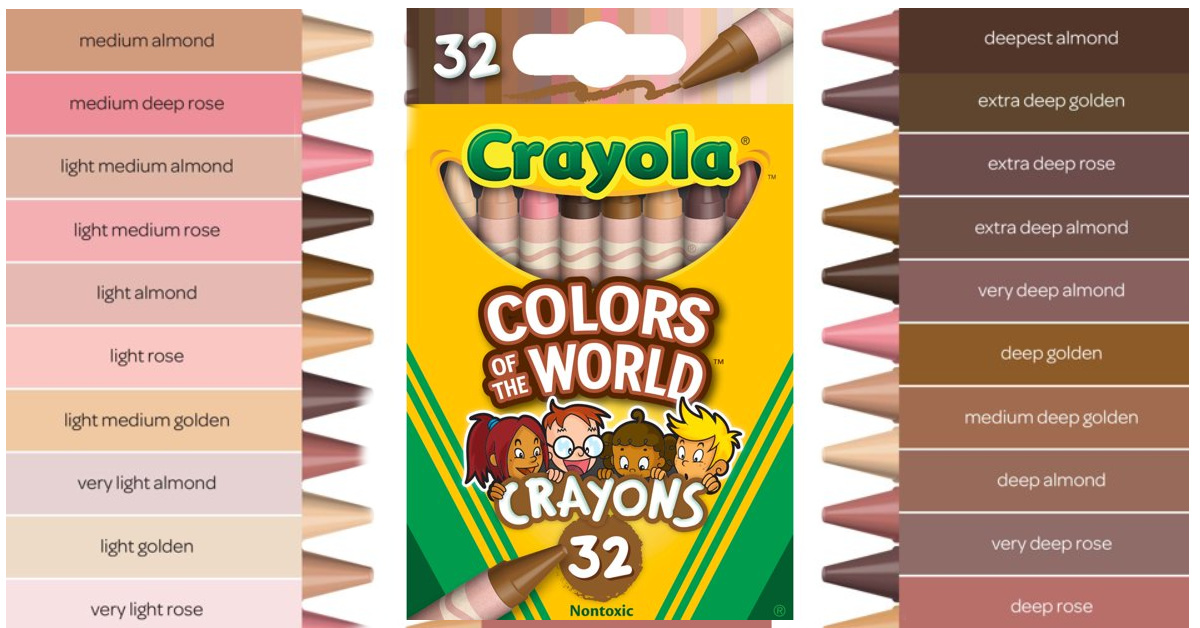 Crayola Released Crayons With 24 Skin Tone Shades So Every Child Can Color...

Crayola is a good brand, but I love them even more now! Crayola released crayons with 24 different skin tones so everyone can be included.

Colors of the World 32 Ct

MUST SHIP USPS PRIORITY MAIL. Crayola Colors of the World Crayons contain 32 specially formulated colors representing people of the world. This pack includes 32 new crayon colors that represent people from around the world.

Back when, there was only a single Crayola that had a skin tone name - “flesh”

I was born after that, and I remember Crayola Crayons marked as “Flesh”.

Must have been an old box. The first changes to the No. 64 box were made in its first year of production, as Light Blue and Brilliant Rose were replaced by Turquoise Blue and Magenta. From then to 1990, no colors were replaced, although, in 1963, Flesh was formally renamed Peach, partially in response to the civil rights movement, the company said. Flesh had been known as Flesh Tint until 1949, and was called Pink Beige from 1956 to 1958. In 1962, the flesh-colored crayon was not featured in the commemorative box The 1970...

Several sources I found say that 1962 is when they changed the color’s name from “flesh” to “peach.” But it’s entirely possible that you had access to crayons that had been made before then. (It’s not like they recalled all the “flesh” crayons.)

I was born in 1968 and I don’t remember ever seeing a “flesh”-colored crayon. All the kids knew that “peach” was the best option for coloring white-person skin.

Perhaps there were massive crayon stockpiles that wound up at schools. I assure you that I had new Crayola boxes in the 1960’s with “flesh,” because it pissed me off and I wouldn’t have made up the word “flesh” randomly. In fact, I got in trouble in the 1968-69 school year for refusing to use the “flesh” crayon to color in a mimeo of Martin Luther King. I argued for brown; my dumb-dumb teacher insisted that flesh was for coloring in flesh.

ETA: When I was in college and found a marking pen close to my skin color for a self-portrait, I cried.

None of the 24 new colors are quite olive enough for my skin, but two in combination with a light, dull green might work.

Wow. I take it blending and stippling were not covered by that super-advanced art teacher?

I grew up in the 60s with the “flesh” crayolas. I am caucasian, and was in an all-caucasian school, but we were pretty liberal and other-conscious, and from time to time, I DID wonder what blacks and others felt about those crayons.

But what really upset me was that “flesh” makes me think of “meat”. That’s not meat color at all. Even from a bigoted, caucasian-centric point of view, the crayons could have been labeled as “skin”.

from time to time, I DID wonder what blacks and others felt about those crayons.

Reminds me of a black comedian (Godfrey Cambridge if I recall correctly) in the 60’s who had a bit about “flesh-colored” bandaids.

I can’t help thinking that having 32 skin-tone crayons available must be very difficult for racist parents. I mean, having to think about all those colors must seem like the end times for them.

This goes beyond Crayola, right? Maybe Jaxon also had a “skin tone”, though I cannot confirm that. Holbein (in their kid’s set) has “Flesh Pink” in one place on their web site, elsewhere called “Fresh Pink”— maybe just a typo?

I think I usually describe my skin color as piggy pink.

I recall there was “Flesh” when I was a kid, probably in the late 50s and early 60s.

Just a classroom teacher. No, when I tried a brown/black crayon crosshatch, she made me do MLK over again. She was one of two extremely creativity-killing teachers I experienced.

Is there a list of the new skin colors? Is pale, sweaty, white guy, on there?

I once saw a Bloom County comic strip where they commented on the removal of the “Flesh” crayon, but pointed out that the set (at the time) still contained “Indian Red”.

I have the 24 crayon set and all 24 are significantly darker than my skin tone. Does the expanded set finally have natural redhead/albino?

It looks like Indian Red was renamed Chestnut in 1999.

I once saw a Bloom County comic strip where they commented on the removal of the “Flesh” crayon, but pointed out that the set (at the time) still contained “Indian Red”.

Is “Indian Red” not a real colour name? Holbein has English Red, Indian Red, and Venetian Red, not to mention Prussian Blue.

I.e. I think the comic strip was making a lame joke.

How about Band-Aids? Nowadays they’re mostly neon or Sponge-Bobby, but back in the day they were all peachy. Without any fanfare the hospital I worked at switched to a browner color of Band-Aid. This was probably some time in the mid 1990s.