Sure, this is a perfect example of why socio-cultural prejudices are so difficult to dislodge.

Or a perfect example of someone unable to realize that sometimes an orc is just an orc.

sometimes an orc is just an orc.

There is an infinite number of ways to depict an orc. Choices matter. And when you’re already in a conversation in which people are discussing change then “Let’s not change it because I don’t see a problem” is the weak position. If you don’t see a problem, then let the people who do see the problem effect the change.

This is about Tolkien and the Lord of the Rings, not D&D, but I do think that LotR was the inspiration for early versions of D&D, and so I think this article is relevant: 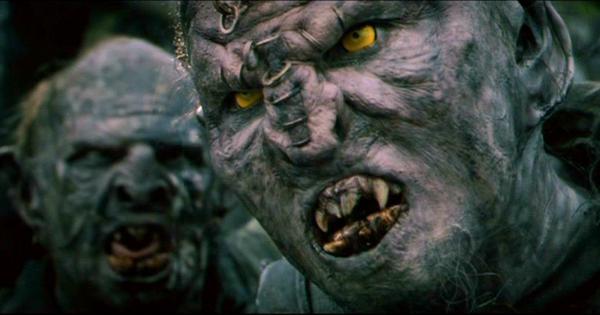 When Tolkien depicted orcs in ‘Lord of the Rings’, was he being racist rather...

Recent accusations of racism are at odds with the values of friendship, altruism and courage exemplified in his books.

The gist of it is that it’s complicated. Tolkien explicitly rejected racist ideology in important ways (both in real life and in his works) and the explicit values portrayed by the books are still largely admirable, but the racial prejudices of his era are implicit in the work, including his descriptions of orcs:

Yet, the orcs in The Lord of the Rings undoubtedly have racial characteristics which are problematic: we never get a detailed description in the text, but recurring traits include slanted eyes and swarthy complexions. These elements sound straight out of Victorian anthropology, linking mental qualities and physique.

At the end of the day I still don’t have any problem with orcs being bad guys all the time. However, a significant number of people do have a problem with how they’re portrayed, and although I don’t agree with their conclusions their arguments are sound. i.e. I can follow along as they don’t seem crazy to me. Since it does offend a sizable portion of the D&D audience, more importantly a sizeable portion of WotC’s primary demographic, I can see why they’re making changes. And I can’t really find any grounds for objecting to the changes in how orcs are portrayed.

Now when it comes to silly arguments that we need to change the name of the Barbarian class because it’s derogatory, no, I have no respect for those. Thankfully, at least for now, those folks are on the fringes.

First, a caveat about my attempt: I know that when you think someone’s being defensive, telling them that you think they’re being defensive is about the worst way to get them to stop being defensive. Nevertheless, I’m gonna tell you, Jophiel, that that’s how it’s coming across to me. I could certainly be wrong; but how you’re arguing reminds me of how I argued against seeing racism in World of Warcraft or Tolkien, some years back. I loved these fantasies, and it was very hard not to take it personally when people suggested they included racist elements, and so I looked for ways to dismiss the claims. Hell, I’m still struggling not to engage in similar behavior with other things (e.g., the charges against Joss Whedon). It’s an ongoing thing.

What I found was that, when I took a breath, stepped away, and tried to look at things with grace and fairness, I found myself saying, “There’s a lot of great stuff here, but yeah, there’s also some serious racism.”

You of course might come to a different conclusion, but I guess I ask that you at least consider whether your love of D&D might make it more difficult for you to see racist elements in the hobby.

Okay, to some specific arguments:
The Color Wheel

short of them being albino Morlocks or neon pink/cyan, they’re probably going to be darker than Euro-flesh because that’s just how the color wheel works.

I took a walk in the Appalachian woods today. While I was standing by a mountain stream, I thought of what you said, and looked around me. Were most colors in nature darker than Euro-flesh, especially the woman in that picture?

It turned out that this wasn’t close to true. From the pale green lichen, to the beige on the underside of a dead white oak leaf, to the grays and tans and creams and yellows and oranges and greens of the granite and rotten wood and mosses and and barks and sunlight dappling rocks through stream-water, there were myriad light colors around me. None of them would look like human skin; they would all be options for orc skin. Hell, I’m no painter, but I believe that artist could have mixed a blob of white paint into his orc-skin paint and achieved a lighter tone.

It may be strictly true that, if you put all the Pantone swatches on a wall and threw a dart, you’d likelier get a darker color than that lady’s skin. But that’s not how the artist chooses a color. The choice is deliberate; and there are plenty of colors the artist could have chosen. The choice of dark skin for the savage brutes was an intentional choice.

Fantasy art is very Eurocentric so it wasn’t by happenstance that the woman is white. That also means that most antagonists are going to fall darker than her on the spectrum.

But there’s a more complex meaning of Eurocentrism: for centuries, European artists have distinguished moral purity with lightness of skin tone, with dark skin tones indicating sin or savagery. Eurocentrism and racism go hand in hand.

I thought it’d be interesting to see how this artist paints other nonhumans. So I found his decidedly NSFW gallery. (That link takes you to his SFW main page; click through to the gallery, but beware boobies). It turns out that when he paints elves, they’re white. Bikini-clad bird-ladies are white. Nekkid fairy ladies are white. Halflings are white. It turns out he can figure out how to make non-dark skin tones for nonhumans, as long as they’re not supposed to be brutish savages.

This tradition–of depicting civilized individuals as fair-skinned, and brutish savages as dark-skinned–is well-established, and hardly controversial. As much as you may love D&D, as much as I do, it’s hardly a stretch to see that a game created by a couple of midwestern White dudes who grew up in the forties and fifties might be influenced by the white supremacist ideas of their times, and that those ideas may have percolated through the fantasy art and books they inspired over the next several decades.

We’re not talking naturalistic skin tone, but I see that picture as well within the tradition of American racist mythology.

Why is everything racist racist racist? I met Gygax, played with Arneson once, and I have carried on a correspondence with many of the originals. Not once did i even get a whiff of racism.

Remember what happened to the boy that called wolf.

There is an infinite number of ways to depict an orc.

Not if you are starting from the source material. Orc were swarthy. Now, note that Hobbits, the big heroes of the books, were noted as having brown skin. Strider was noted as having a dark complexion. Ents were brown.

Because for most of our culture’s history, and to a certain extent to this day, our culture was a white supremacist one.

So? This reminds me of that guy Cecil debunked, that was always seeing dirty pictures in ice cubes, etc.

Sometimes a ice cube is just a ice cube. In fact it usually is.

This is about Tolkien and the Lord of the Rings, not D&D, but I do think that LotR was the inspiration for early versions of D&D

D&D takes from Tolkien, among other sources, but its orcs aren’t really Tolkien orcs. More like just swiping the name for some of their cannon fodder low-xp bad guys.

There is an infinite number of ways to depict an orc

Not when making art for TSR in the early 80s there wasn’t.

then “Let’s not change it because I don’t see a problem” is the weak position.

No, the weak position is “Your positions don’t count if they don’t agree with mine 'cause that just means you’re not as woke as I am or else you’d agree. Any disagreement is just systemic racism in your brain and even if you’re a supposedly affected minority who isn’t upset, it can only be because you were brainwashed to not understand on my higher level.”

Not if you are starting from the source material. Orc were swarthy.

Exactly. The pale skinned elves, when corrupted by pure evil, became “swarthy”. Nothing to see here, folks- no racism at all, no siree

You of course might come to a different conclusion, but I guess I ask that you at least consider whether your love of D&D might make it more difficult for you to see racist elements in the hobby.

Amusingly, I spent a number of keystrokes arguing about how Drow were problematic as basically the only canonical dark-skinned PC race in the PHB. I’m not unable to see issues in the hobby. I’m not just on board your orc train in this example.

Exactly. The pale skinned elves, when corrupted by pure evil, became “swarthy”. Nothing to see here, folks- no racism at all, no siree

And this was part of my issue with Drow as a PC race. They’re literally color-coded Black = Evil in the game lore. Orcs aren’t. Orcs in D&D aren’t fallen elves, they’re just orcs.

I’m not just on board your orc train in this example.

For the record, my main issue with Always Evil (due to inherent orciness) Orcs isn’t racism, it’s that this is shitty storytelling and world building.

And this was part of my issue with Drow as a PC race. They’re literally color-coded Black = Evil in the game lore. Orcs aren’t. Orcs in D&D aren’t fallen elves, they’re just orcs.

Then why do the hobbits have nut brown skin?

Why is Aragon “dark”? Why is Wormtongue whiter than white? Why is Saruman white?

“because they are evil elves and dark = evil”

But that’s not really true.

Right, but as DrDeth pointed out dnd orcs look the way they do because they were cribbed from Tolkien

Except Gygax pretty much just grabbed the name, not the lore or whatever. And “Orc” as a name and concept pre-dated Tolkien in Germanic folklore.

Then why do the hobbits have nut brown skin?

Why is Aragon “dark”? Why is Wormtongue whiter than white? Why is Saruman white?

“I can’t be racist, I have black friends!”

Aka “Tolkien’s orcs can’t be racist, he has some positive dark characters!”