Damned Smoke Alarm Batteries: That Time Of The Year Again

You are supposed to change batteries in your home smoke alarms in October anyway, but my smoke alarms decided to piss me off early with the annoying little “chirp”, letting me know it is time to go buy new batteries, get out the ladder and switch them out.

Now I know it is important to keep those smoke alarms working - years ago I wrote a thread about the fire we had in our laundry room (and in his panic, DMark stupidly calling 411 instead of 911)…but still, there has to be a better system.

Can’t they put in rechargeable batteries in these things? I ain’t getting any younger, and there is one smoke alarm that is probably 12 feet high and climbing that ladder and reaching up…well, I keep envisioning myself sprawled on the floor with a broken neck, dying a slow death, with the sound of that damned smoke alarm chirping away every minute, on the minute until I croak.

Plus, the smoke alarm nearest our kitchen is like the ever-annoying, newly-righteous ex-smoker in the room who goes ballistic at the mere whiff of a single .0001 particle of smoke 30 feet away. We have to scour our oven before cooking, otherwise that damned alarm will screech like parrot being castrated.

So, do yourself a favor - go get those batteries, have the ladder ready and get ready. October is here, time for the yearly switcheroo.

Better to do it now than have one of those batteries die, like happens to us, at say, oh, 2:00 AM - and you get that lovely, annoying “chirp” that sounds like a cricket in heat. And yeah, does that really have to happen every 60 seconds? Couldn’t once an hour be enough to remind us?

Sincerely,
The Worst PSA Announcer Ever

(No, I meant the batteries, I wasn’t suggesting you need drugs.)

The is the story of the remodel that left the smoke alarm above the new ceiling to slowly sing itself to death. Probably a UL, though.

Sold!
I will pick up six of these before the batteries run out on the ones I currently have!
Thanks for the link!

Of course, this does beg the question as to how long they have been on the shelf, so I might “only” get 8-9 years out of it, but still…better than the annual death-defying ladder climb.

rechargeable batteries do die. you wouldn’t want your battery backup to no longer be alive when needed.

Lithium disposable batteries are an improvement. they are labeled ‘up to’ 7 or 10 years. i’ve had them last about half that time.

I know they are supposed to chirp when they are dying. And mine did. Except for a couple of times (last one a couple of weeks ago) when instead of chirping they decide to activate in the middle of the night. No one cooking anything, no one smoking anything, nothing extraordinary going on, they activate, scream like crazy until I pop all the the batteries on 6 of the alarms out, then when I pop them back in a couple start chirping until I put new batteries in. All at 3am.

I’ve wondered how much false alarms shorten battery life. If somebody is burning bacon or toast fairly frequently will that cut battery life?

The 10 year alarms are disposable. But I figure $18 is worth it to avoid annual battery changes.

Careful - when they do start to give out, those 10-year batteries can be a nuisance… 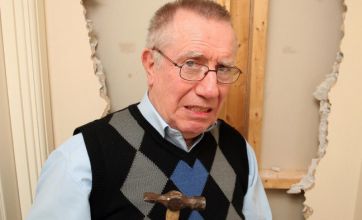 For more than a year Paul and Jeanette Henry were driven round the bend by a mystery ‘beep’ in their home.

i think you can get a smoke alarm that is wired in - not sure how long the alarm itself would last though. i usually change it at new year… but for some reason the local govt has decided to pester everybody about doing it on some arbitrary date that they’ve pulled out.

i think you can get a smoke alarm that is wired in - not sure how long the alarm itself would last though. i usually change it at new year… but for some reason the local govt has decided to pester everybody about doing it on some arbitrary date that they’ve pulled out.

backup batteries are recommended to be replaced yearly.

i see recommendations for 7 years on CO and 10 years on smoke alarms.