A hilarious article in an otherwise serious blog. By a USAF Lt Col.

The geek is strong with this one. Warning! Star Wars: The Force Awakens spoilers below. If you’ve seen the posters for the new Star Wars movie — and frankly, how could you not have? — you may have noticed the large, Death Star-ish object lurking in the background. It’s called...

You have to wonder about that meeting at First Order headquarters where somebody said, “Hey guys, I’ve got a great idea! Let’s build another giant round spaceship that can blow up planets! What are the odds it’ll fail a third time!”

Hey, they’ve got a galaxy-wide military-industrial complex to support. Do you want multi-system-wide unemployment? Giant round planet-killers are just good business sense!

Hey, they’ve got a galaxy-wide military-industrial complex to support. Do you want multi-system-wide unemployment? Giant round planet-killers are just good business sense!

If you have crews building them, then you’ll have lots of Mugs and T-shirts like this: 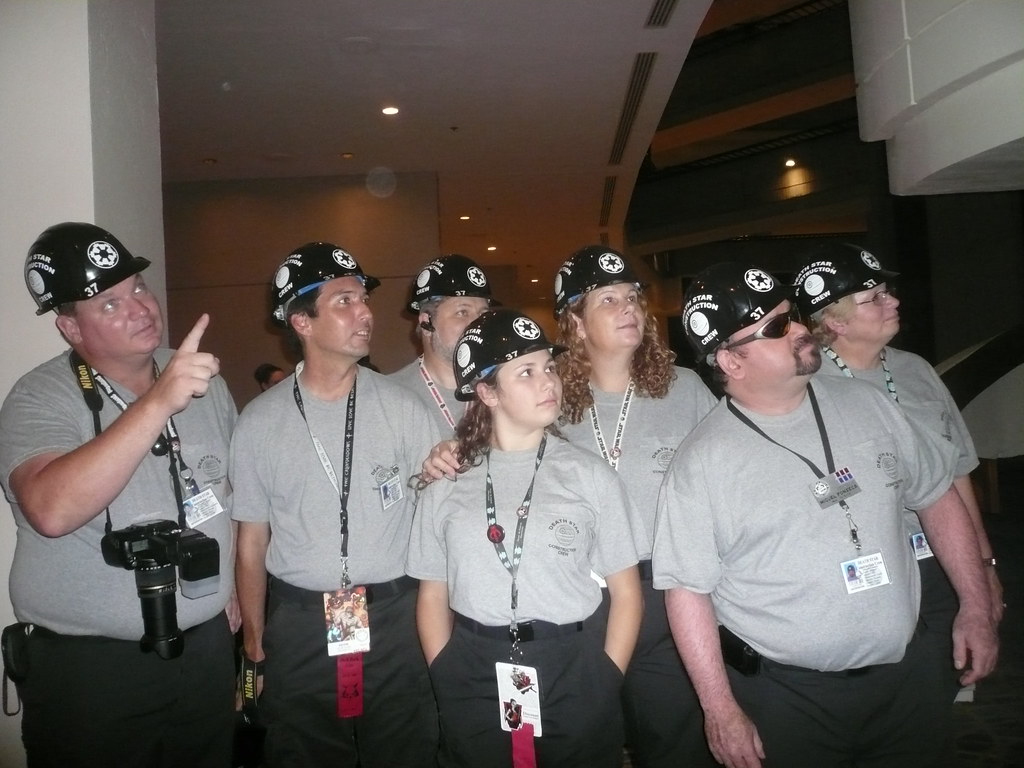 He makes some interesting (and understandably cynical) points about military projects and the Imperial/First Order military culture. People always point to building a second Death Star and say, “The first one failed. Why would they make another?” If you think about it, though, it makes more sense. Death Star II was very likely already in progress and pretty far along when the first one went kablooey. Considering the delays in the construction of the first one, there just doesn’t seem to be enough time to get a second one from scratch to operational in the intervening period. It’s more likely that the plan was to have a small fleet of the things, and DS I was just the prototype. As soon as crews finished their part of the prototype, they reported back to the engineers, who reviewed the implementation, made fixes and improvements, and sent them on to DS II.

Then the first one got blown up. The Empire launched a conventional counteroffensive, but was only partially successful; too many of the rebels escaped, including the leadership, and scattered. Imperial control relied heavily on an appearance of overwhelming power; this is the driving force behind their preference for enormous capital ships and superweapons–they couldn’t be everywhere, and they relied on fear to keep people in line, so they had to be unquestionably the Big Dogs whenever they showed up. The downside is that they’re not really well suited to fighting a decentralized, sneaky enemy. (Vader is an exception to this, as he’s basically the Emperor’s Special Ops guy.)

So, while what we see is the Rebel Alliance reeling in the aftermath of the Battle of Hoth–primary base destroyed, leadership in disarray, heroic figures injured or captured–the Empire was not in the best position, either. The Emperor had a serious PR problem on his hands. His Biggest Dog got taken out by a chihuahua with an attitude, and you can bet the rebels made sure people knew about it. As Tarkin told Leia, the Imperials had been counting on the Death Star to keep systems in line after the dissolution of the Senate. Without it, things were starting to break down, which made it easier for the rebels to hide and resupply.

The Emperor needed a decisive victory, but he couldn’t bring his fleet to bear on them if he didn’t know where they were. As long as they were in deep space and on the move, there wasn’t much he could do about them. He needed a way to draw them out…and there was his half-completed superweapon. A weapon of terror if completed, and the rebels knew they could destroy one. It was the perfect bait. It didn’t have to be complete–in fact, it was more tempting bait if it wasn’t–it just had to draw the rebels into a pitched battle, where the fleet and the just-completed firing system on DS II could take out their capital ships. That would cow the wavering systems long enough to finish the armor, propulsion, and support parts of the DS II, and the original plan would be reestablished.

It wasn’t a bad plan…but he and his right-hand man were distracted at a critical time, prioritizing personal matters over monitoring the military situation. Things might have gone very differently if he had said, “Lock your kid in a cell, and we’ll talk to him later. I want you down on Endor, covering our asses. Take some bombers with you.” He put being a Sith over being Emperor, and it bit him.

As for why the First Order followed the pattern as well…well, I’ve suggested elsewhere that, since we know it’s possible for memories and even identities to be persistently encoded in the Force, the Force itself may be pushing its users along established paths. It’s enforcing the cycle of history. After all, what was the title of the latest movie? The Force Awakens. Maybe this trilogy will be about breaking the cycle.

Given the Imperial Forces are styled as a bunch of space Nazis I always thought the over the top weapons were a nod to Germany’s obsession with super weapons that held little strategic value, e.g. the Paris gun, super heavy tanks, the V-2, etc.