Nowadays it seems most depictions of genies are blue. (Go to your favourite image search engine, type in “genie”, and you’ll find the overwhelming majority of the results are blue. Even those genies not featuring blue skin tend to have blue clothes.)

Now, we all know that the genie in Disney’s Aladdin was blue. And I’m sure he wasn’t the first blue genie in history. But in deciding to make its genie blue, was Disney following (and contributing to the entrenchment of) an artistic convention that had already been established? For example, were the genies of Islamic and pre-Islamic mythology said to be blue? Did they start to be depicted as such by Western writers who compiled and translated Arabian folk tales in the 18th century onwards? Or was the pre-Disney distribution of genie colours altogether different, making Disney almost solely responsible for the modern-day preference for blue?

I seem to vaguely recall an early (1930s) Popeye cartoon, that had a Blue genie.

On I Dream of Jeanie, (once it shifted to in colour,) she appeared as a cloud of pink smoke, and her antagonist, the Blue Jin, appeared as blue smoke. (Yes, played by Michael Ansara, her husband at the time, who also guested on the show at other times.) https://i-dream-of-jeannie.fandom.com/wiki/Michael_Ansara

I don’t believe the Arabian Nights describes their color, only that they’re impossibly huge in size for vessels that contain them, and can be invisible when they want to, but are otherwise, have a mortal-like structure – i.e. watch where you spit your date pits, people: https://arabiannights.fandom.com/wiki/Tale_of_the_Trader_and_the_Jinn

I could look up specifically how the Koran defines the Jinn, but I’d have to use an English translation, and that’d probably offend someone. They’re supposedly formed of smokeless fire, but have human-like structure. I think odd-colors would make them stand out too much.

They are often portrayed as an unusual colour. I’ve seen red, green, and gold genies in various things.

Mythological and folkloric descriptions of invisible jinn aside, there are plenty of fanciful illustrations of colourful jinn : 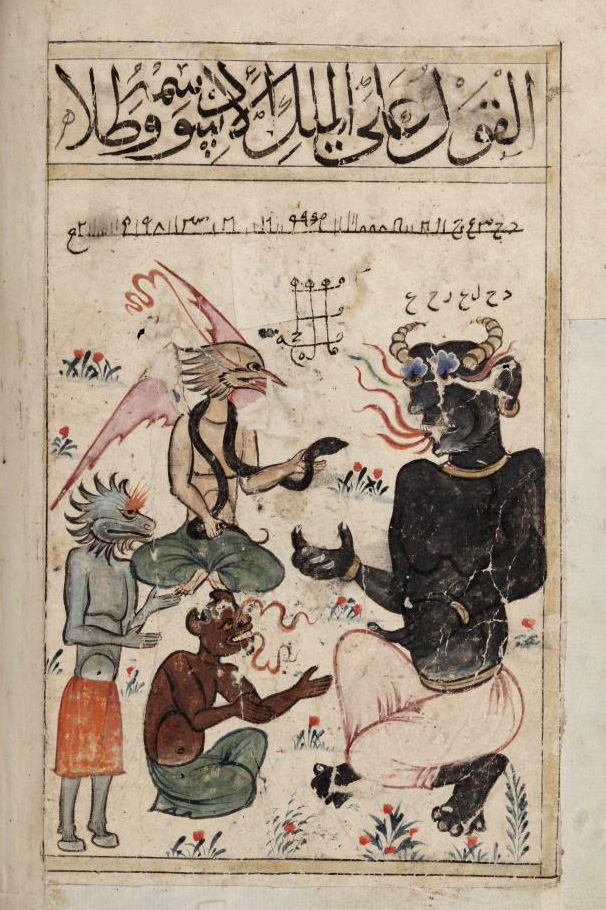 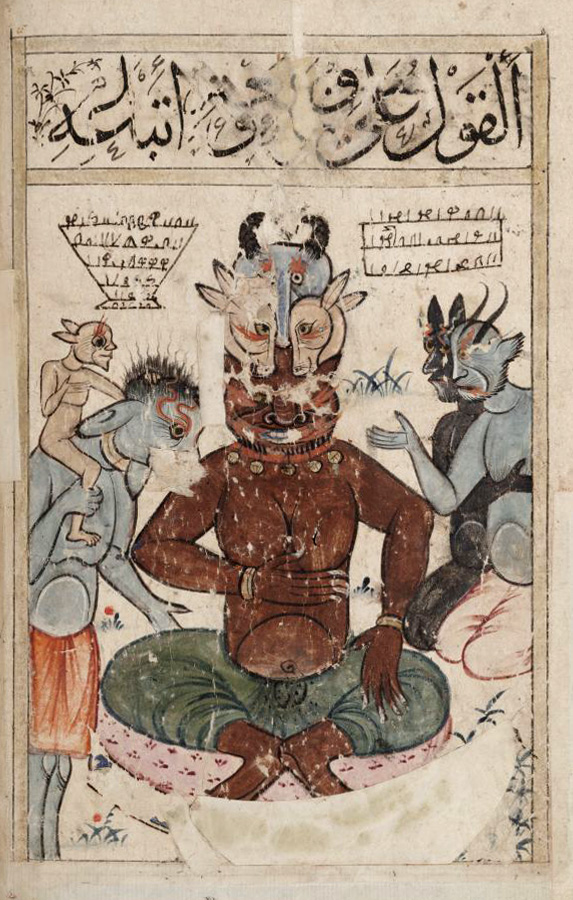 Mythological and folkloric descriptions of invisible jinn aside, there are plenty of fanciful illustrations of colourful jinn

They are often portrayed as an unusual colour. I’ve seen red, green, and gold genies in various things.

Oh, no doubt. As I said, I’m sure genies have been depicted as blue (and other fanciful colours) in the past. The question is whether blue was the most common of these colours before Disney, or if Disney is in fact the origin of the modern convention.

No doubt Disney has undue influence. Just see how many mermaids have red hair.

As for modern depictions - really, what color can they be? Black, white, pink, yellow and orange are too close to normal human skin tones. Red is the color of devils; green is the color of nature spirits (and aliens). Blue and purple are the only colors left, and blue looks better.

Plus, (D)Jinn are usually depicted as spirits of the air, which is blue.

As for modern depictions - really, what color can they be?

Seems your argument works just as well for modern depictions as for historic ones. So are you saying that blue would have been the norm in times past as well?

Seems your argument works just as well for modern depictions as for historic ones. So are you saying that blue would have been the norm in times past as well?

No really. The red=devils is a European thing - and the Muslim cultures from which the Jinn originated didn’t really distinguish between devils and jinn, anyway. The green thing is pretty new, and as for the other colors, they were probably less worried about race-coding in the past then they might be now.

Kang was among the most influential leaders and feared diplomats in the Klingon Empire during the late 23rd and early 24th centuries. He is known in Federation history for his long friendships with Kor, Koloth, and Curzon Dax, and as an adversary of... 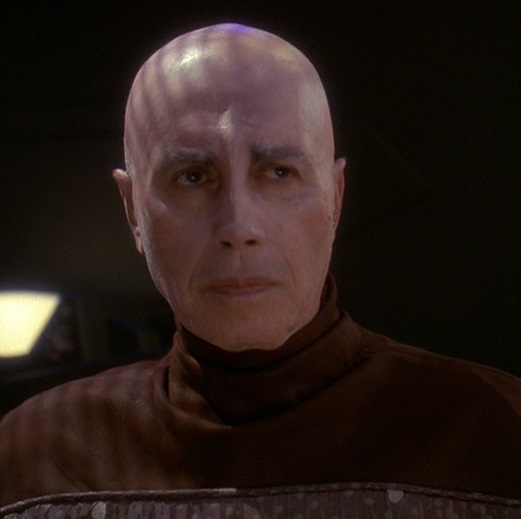 Jeyal was the Tavnian husband of Betazoid ambassador Lwaxana Troi. In 2372, Lwaxana became pregnant with Jeyal's son, and Jeyal insisted that his son be raised only by men, as per Tavnian tradition. Lwaxana then left Jeyal and escaped to space...

In the 1940 version of The Thief of Baghdad, the genie has normal (slightly darker than a honky) skin.

No, he was blue-green, though the color came and went

I seem to vaguely recall an early (1930s) Popeye cartoon, that had a Blue genie.

The Popeye film Aladdin and His Wonderful Lamp (1939) featured a blue genie.. The genie, who is silly rather than scary like the one in Thief of Baghdad, would seem to have been an influence on the Disney version.

I expect Spike Jone’s I Dream Of Brownie With The Light Blue Jeans and Stephen Foster’s Jeanie With the Light Brown Hair fit into the evolution of blue genies somewhere.

Since this is about artistic depictions and popular culture, it seems a better fit for Cafe Society. Moving.

Shawn’s character appears normal. His boss is normal, but filmed under a red spotlight.