Looks like the last time this question was asked was in '17, long enough ago that things may have changed enough to ask again I think, though I did skim through the '17 thread.

Our 5 year old Whirlpool dishwasher has been useless at cleaning for awhile now. We finally hired a dishwasher repairman who said it was the motor pump assembly, which that model was notorious for, t would take a week or two to order the part, and it would cost over $400. He said it in a way as if to say “I wouldn’t bother if I were you, time to buy new”. I’m pretty handy, so I checked online and the part alone is like $250. But I’ve never liked this model since we bought it.

The repair guy recommended Bosch, which is fairly pricey but I believe in paying for quality. Thing is, my wife, who is thrifty usually in a good way, is kind of thrifty to a fault when it comes to going too cheap on appliances. So let me also ask, for example, if anyone knows Bosch dishwashers, what is the difference between say, their series 100 ($600-$800) and their series 300 or higher ($900+). Is the cleaning ability about the same, just more bells and whistles on the more expensive models?

We’re in the market for a dishwasher too. Our Bosch benchmark has a problem with its drain pump and after a month of trying to get it repaired under the home warranty we’ve given it up for dead. Apparently our specific model has a design problem and Bosch told the repair guy that due to that the drain pumps were only lasting ~2 years. Ours is 20 months old. . .

That being said I really liked ours for the first two years. It is a 40 dB model and even standing next to it in a quiet house I can’t hear it running. I’ve opened it several times thinking it was off only to find it was in the middle of its cycle. It also could clean anything no matter how caked on I didn’t have to rinse the dishes and they came out perfect. At $2,000 we won’t buy this specific model again since its not worth $1,000 per year but we’ll buy a different top end bosch. At this point our only debate is if we want to hand wash the dishes until Black Friday or overpay for one.

So don’t buy this model.

who said it was the motor pump assembly, which that model was notorious for

I know that you don’t really care about the dishwasher enough to fix it, but sometimes the replacement parts are designed to fix an issue with the original part. I recently replaced the drum rollers on an LG dryer (a fairly easy task, btw). The original rollers had bushings which had seized, and the replacement rollers had bearings. In another case, the upper rack roller assembly on my KitchenAid dishwasher was plastic and constantly breaking. A metal replacement was available.

We recently got a Bosch 300 series based on a Wirecutter.com recommendation, and it’s awesome. It’s so quiet I often actually need the little red light it shines on the floor to know that it’s on. The 3rd top rack for silverware is great.

According to the Wirecutter, all Bosches use the same cleaning system. Higher priced ones have nicer finish, better drying, and quieter insulation.

We recently got a Bosch 300 series based on a Wirecutter.com recommendation, and it’s awesome.

Thanks! Looks like we’re going with the Bosch 500 series-- I was looking at the 300 Series but my wife surprised me by wanting to go a step up. I understand it’s a bit better with drying, especially plastic items, and we’re sick of putting the tupperware on a dishtowel to finish drying after emptying the dishwasher.

Our Bosch benchmark has a problem with its drain pump … Apparently our specific model has a design problem and Bosch told the repair guy that due to that the drain pumps were only lasting ~2 years. Ours is 20 months old. . .

I see that model is discontinued. Hopefully they’ve fixed that design problem by now!

We got a Bosch in January. It is only 50db and it is the fastest and quietest dishwasher we’ve had. Very happy with it.

Consumers recommended it and it had a high rating on Lowes with over 1000 reviews.

Several years ago we (my wife and I) needed a new dishwasher. We checked a local non-chain store that had brands nobody else had. Their top-of-the-line was Miele. We looked at them and walked out laughing. Who would ever pay $3000 for a dishwasher?

Well, another store was having a warehouse sale. And they had a Miele for $1000, a discontinued floor model that had been sitting around for three years. But it came with a full warranty and all repairs to make it runnable were free. Never had to call in a repair since.

We snapped it up. It’s rated at 39 db. It’s so quiet that my wife and I continually open it while it’s in the middle of a cycle because you can’t hear that it’s on. (There’s a red light that got hidden by the counter so you can’t see it from above.) It has three racks and three washers. The separators are so close together we can almost run out of dishes before it gets filled. All the heights are adjustable, racks can be taken out or arranged, we can put huge glasses or big pots inside with ease and still have room for everything else. It’s amazing.

That Miele is the only top-of-the-line appliance we have and we stumbled across it by accident so it can’t be a buying recommendation. Just a reminder that sometimes if you do your research first you can find a true bargain at a big sale.

We bought a house with that came with a Miele. Never heard of the brand before.

I was always a Maytag/GE man myself. Mostly for economic reasons.

But damn if this Miele didn’t clean the heck out of anything we threw in it. Spotless lasagna pans. It was white though.

We remodeled the kitchen eventually. Purchased a Bosch stainless steel, which came highly recommended. It is better than GE/Maytag, but not as good as Miele. Miele is quite pricey though.

The repair guy recommended Bosch, which is fairly pricey but I believe in paying for quality. Thing is, my wife, who is thrifty usually in a good way, is kind of thrifty to a fault when it comes to going too cheap on appliances. So let me also ask, for example, if anyone knows Bosch dishwashers, what is the difference between say, their series 100 ($600-$800) and their series 300 or higher ($900+). Is the cleaning ability about the same, just more bells and whistles on the more expensive models?

Our son works in a whitegoods wholesaler/retailer. the biggest in the country. According to him the big difference is German-made vs Chinese made. IMO go for the cheapest of the Bosch German models. Ours is a Series 6 SuperSilence model (44db).

We were in the market for a dishwasher around 6 months ago. I was all set on getting a Bosch, but the local appliance store I wanted to patronize did not carry Bosch.

After much hemming and hawing - and lots of Google research - we went with an LG instead. It has all the features touted in this thread, and then some, and it was priced about $90 less than the Bosch I was in love with. We couldn’t be happier with our choice.

I’m sure I would have been satisfied with a Bosch, but I do think I let myself get a little too caught up in the name over the product.

I’ve read about new dishwashers that adjust the wash cycle based on how filthy the dishes are.

That’s a big problem for me. I add dishes after meals and wash a load every other night. I can’t stand putting unrinsed plates in there. It attracts bugs and is nasty. I just rinse quickly with hot water. There’s alway some residue on the dishes.

I don’t want a dishwasher judging whether my dishes need a full wash cycle.

I’ll look for a dishwasher without those sensors. 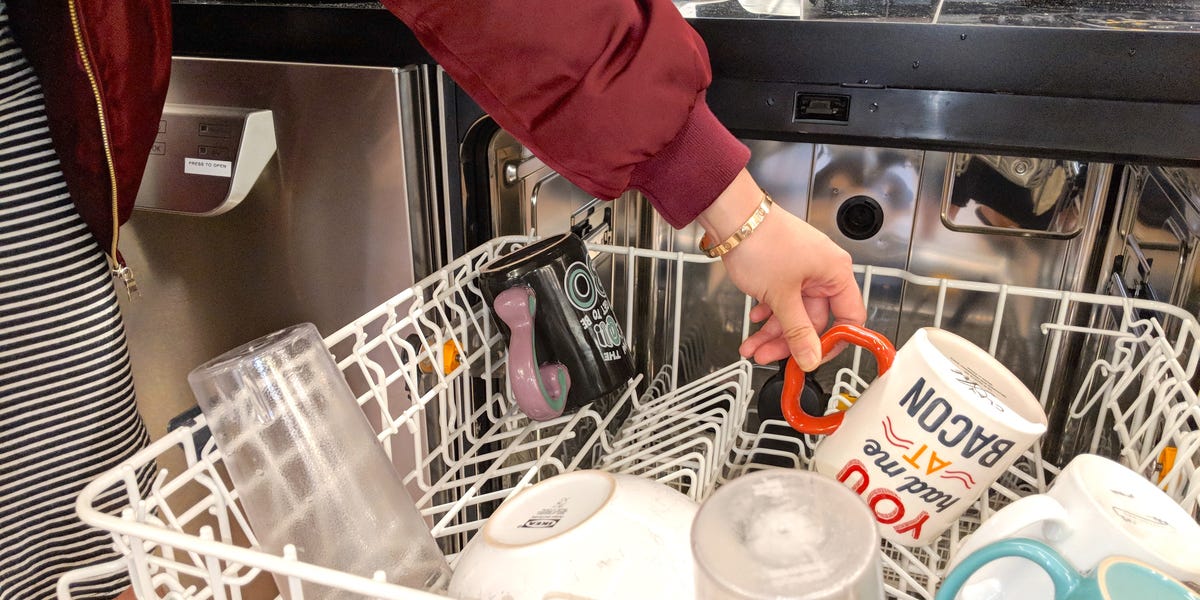 An expert says not to rinse dishes before putting them in the dishwasher —...

When it comes to dishwashers, you're either a staunch supporter of pre-rinsing dishes before loading them, or you're against it. There is no middle ground. An expert claims that it you actually should NOT rinse dishes beforehand if you want the best...

What Consumer Reports had to say:

Basically, their top 8 or so were Bosch, a few Thermador, more Bosch then a Miele, then a bunch more Bosch. There are some top rated Bosch a lot less than $2000. Their top Bosch is listed at <$700.

I bought a Smeg, which is supposed to be top end. It had endless expensive issues.*

I replaced it with a Bosch. No further problems.

Just a follow-up, in case anyone cares. So it took awhile because the first time the install guy showed up, he said there wasn’t enough vertical room to install it (by a mere 1/4"), which surprised us because we measured and thought it should. The guy said, yeah, Bosch is a little bit taller than most dishwashers.

Fortunately we had kitchen floor tiles that had been installed over old cracked flooring, and were floating interlocking tiles, not glued down. So we could easily remove part of the top flooring. That gave us just enough room.

A couple weeks longer to arrange another visit, and dishwasher successfully installed! Been a week or so of using it, and it works fantastically. Nice to have sparkling clean dishes again! The drying feature, where the door automatically pops open to let out steam, actually works better than I thought it would. Even hydrophilic plastic stuff is dry enough to put away immediately. Even when the old dishwasher was working well, plastic stuff like storage containers were often still so wet we had to put them on a towel to dry before putting them away.

So which Bosch did you get? You mentioned it was in the 500 series.
Mine doesn’t do the pop open trick and the plastics are far too wet to put away when the dry cycle is done.

So which Bosch did you get? You mentioned it was in the 500 series.