The playbook for attacking Trump is posted on the smoking gun 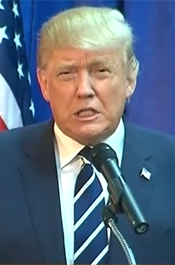 JUNE 15--An online vandal using the name “Guccifer 2.0” has claimed credit for the recent hacking of the Democratic National Committee’s servers and has provided The Smoking Gun with documents stolen

There’s also supposedly DNC documents on Clinton. How the DNC will support her campaign and present her to the public. Wiki leaks may have them. Anyone have a link?

A hacker has leaked a trove of documents purportedly stolen from the Democratic National Committee, including a 200-page opposition research book detailing aspects of the party’s battle plan against Donald Trump.

Opposition research books are among the most closely guarded secrets in political campaigns, representing months or even years of work spent digging up dirt on opponents. Their contents are meant to be deployed strategically to maximize impact, not dumped all at once.

Two other documents that are very concerning were internal memos. One, claiming to be written on May 26, 2015, a full year before Hillary was declared the winner of the party’s presidential nomination and months before the first primary was held, speaks of her as if she is already the nominee and how they aim to spend the following year preparing her for such a moment.

Forgot the link for the second quote.

I’m really not understanding what point you’re trying to make. I’d appreciate it if you’d make your point clear.

This is a major link of internal campaign information.

How you view the information is up to you.

I’m sure the Trump strategists will find this information quite helpful.

It’s a bit like getting a team’s playbook a few months before the Superbowl.

I don’t know if there’s much the Trump campaign can do. But they will know what he’ll be attacked on.

How the Clinton campaign uses this information will be interesting to watch. What points do they attack with first?

This is a major link of internal campaign information.

How you view the information is up to you.

I’m sure the Trump strategists will find this information quite helpful.

I can imagine the hacker’s surprise: “Uh, Boris? This is just a bunch of PDF’s and saved videos of American news coverage.”

This is not good, but were it another year, it would be disastrous. The oppo research on the one candidate who is his own opposition research machine is not as valuable as it seems…

Here’s the opening paragraph on the December 2015 playbook:

“One thing is clear about Donald Trump, there is only one person he has ever looked out for and that’s himself. Whether it’s American workers, the Republican Party, or his wives, Trump’s only fidelity has been to himself and with that he has shown that he has no problem lying to the American people. Trump will say anything and do anything to get what he wants without regard for those he harms.”

…Holy shit, how are they going to explain this one away???

… Wait, are we sure they didn’t hack into Paul Ryans research?

Really, the snark just writes itself.

They have plenty to attack Trump with.

I haven’t read the report closely to see if there’s any surprises that could broadside Trump.

Campaigns never know which political attack ad will catch the public’s attention. It’s like shelling an enemy’s camp. One lucky shot can be devastating.

When your knowledge of IT is such that you think you can wipe a server of data using some Charmin and you keep a mail server in a bathroom it’s not surprising foreign countries steal your data while laughing at your ineptitude.

They have plenty to attack Trump with.

I haven’t read the report closely to see if there’s any surprises that could broadside Trump.

Campaigns never know which political attack ad will catch the public’s attention. It’s like shelling an enemy’s camp. One lucky shot can be devastating.

Apparently, Trump has expressed some antipathy towards Latinos, and this may make him a bit vulnerable in states with a larger latino population. Attack ads in these areas may feature footage of Trump saying less than polite things about Mexicans.

This is a SHOCKER! Has anyone informed the media about this? WOW!

I haven’t read the report closely …

Maybe you won’t be watching this campaign closely but I will.

They’ll spend what? Hundreds of millions on this up coming campaign? The Clinton campaign’s teams of strategists have a lot to decide. How they use this information can easily decide the outcome of the election.

I did check several pages, nothing new really, frankly it looks just like notes from media reports that everyone with an ounce of sense did notice during the primaries. (Of course a good chunk of Republicans liked those but the point is that now the contest is going outside the Republican sandbox and many need to be reminded about what Trump gave for free to the Democrats.) Why Nominating Donald J. Trump Would Be a Catastrophe — DR. BRIAN MATTSON

The subject of my last post was why I believe nominating Ted Cruz is a mistake. In a nutshell, Cruz has a more limited upside than others when it comes to getting enough votes in a general election. I don't doubt the sincerity of his conservatism,...

Let me get this out of the way. We need not actually fear a Trump presidency. It won’t happen. The Democrat General Election Voting Machine will destroy Donald Trump. It will not even be close. And this is not just because I believe he has as much chance of reproducing Mitt Romney’s 60+ million votes (and still fall short!) as I do of making contact on a fastball from Clayton Kershaw. It is because, after over a year of grotesque “in-kind” campaign contributions from the mainstream media in the form of 24/7 wall-to-wall Trump coverage (with the intent of getting this guy nominated), watch what happens next.

Do you think a narcissist, wheeling-and-dealing businessman like Donald Trump has a few skeletons in his closet? No. He’s got warehouses.

And with Trump I can expect this reaction:

Trump: Hah! they think they got me with the banning of Univision’s reporters point in that Oppo Research, I will only need to mention “Mexicans!” and “I’m making a Wall!”, easy peasy!!

Trump media guy hired yesterday: Uh, Mr Trump, you are seen now as a racist for tripling down on that! (And virtually all Univision reporters are Americans)

Trump: You are fired! [then turns to talk to his few managers left] I told you guys to stop hiring those nabobs, you are like moles for the GOP establishment. You will be next if you continue!
Ah well, just continue Mr. Trump. Do not change!

Hillary and her speechwriters will cherry pick details from the report too.

There’s so much negative information about Trump. Deciding what to focus on will require a lot of planning. Where is he the most vulnerable? What will the public care about the most?

Maybe you won’t be watching this campaign closely…

Heh. Yes, all parties agree that I have no interest in the campaign and never post my opinions on the campaign. In fact, since I joined the SDMB in 2002, one of the most frequent criticisms I get is that I never post my political opinions. It’s terrible, it really is, that my only view of political threads is that I expect them to not include me.

You, on the other hand, post this MPSIMS worthy OP, with absolutely none of your own thoughts. Definitely worth looking at.

Hillary and her speechwriters will cherry pick details from the report too.

There’s so much negative information about Trump. Deciding what to focus on will require a lot of planning. Where is he the most vulnerable? What will the public care about the most?

As this is the 21st century, I do think that virtually all will get a bit of airing, because it will not be just the DNC or Hillary talking about it, but many people will talk about it to others in social media for free.

One more thing, There are still 5 months before the election. I bet that Trump will make so many more assholish remarks and more skeletons will be found that the DNC will have enough material to make (and use in real time) a Volume II of Oppo research on Trump by then.

It’s pointless for me to go into a long rant against Trump. The report speaks for itself. It’s highly detailed and organized.

The report is important because it allows the public to get the whole story. Rather than having it presented in attack ads and short sound bites from speeches

If this plays a role it will be because of what it says about the Democrats, not about Trump. Anything the Democrats say about Trump has to be viewed through the lens of their own vested interest in making their opponent look bad so that they can win, which means anything worth taking to heart is worth taking to heart because we already have independent verification.

On the other hand, it may reveal some dirty laundry the Democrats have been hiding, either of the nobody-mention-the-shallow-grave-in-Hillary’s-garden variety, or because they were planning on using scummy tactics. If they wanted to use accusations of atheism as a weapon against Trump, for example.