Do all of the scientists accept the Big Bang?

Please tell me if I understand this correctly. There used to be nothing. No space. No time. No matter. Then an infinitely compressed something smaller than an atom - was it energy? exploded, expanded and created time, space, matter, everything that exists today. Before anyone gets ready to jump down my throat, I DO NOT accept creationism, but I’m hoping that someone can explain the big bang to me in a way that isn’t such a strain on my imagination. Granted, I’m no Einstein, but my mama didn’t raise no dummy either. Can anyone help?

The big bang is not meant to be an everyday description of what happened at the beginning of the universe. Rather, it’s a mathematical description of what sort of event we would be getting closer to if we were to travel back in time to the beginning of the universe. As you might imagine, that makes it somewhat difficult to put into ordinary language, and I’ll leave that for someone better than myself.

My momma didn’t raise no idiots either. A few fools, maybe, but no idiots. And I don’t know any reputable scientist who claims to understand how the big bang happened or what was before it. All proposed laws of physics break down in the critical region.

I’ve heard some people hypothesize that the BB could have occurred from an entire other universe collapsing into nothingness via a giant black hole, and creating a new continuum (ours) but that of course begs the question of where that other universe came from.

I’d be interested in hearing from our SDMB physicists on this one myself.

Alas, ordinary language is all I have. Hopefully someone can help.

Has the question of whether the universe is open or closed been resolved? Personally, a closed universe appeals to me for no reason I can explain. Or rather a pulsating one. It seems like what happens once ought to happen more than once. But then I’m just a laymanoid who thinks about these things.

The question hasn’t been resolved, but I believe that the current evidence points to a flat universe (neither open nor closed). However, that still doesn’t lead to a big crunch (I think).

There didn’t used to be nothing, since time in which that could occur. So there was no “used to” and no “before the universe.”

It may help to think of the universe as a 4 dimensional object of space-time. The Big Bang merely describes a particular location in that space-time, namely when all four dimensions were at zero.

*Originally posted by Dr. Lao *
…since time in which that could occur.

That should read, “…since there was no time in which that could occur.”

Nobody knows what, if anything, “caused” the big bang, what, if anything, came before, if that’s even meaningful, or what the exact initial conditions were. There’s some speculation about such things, of course, but at the moment it’s more a matter of philosophy than of science. What we do know is that there’s strong evidence for something awfully dramatic about 15 billion years ago, and the Universe has been expanding ever since.

There are a handful of cosmologists who don’t accept the Big Bang (most notably Hoyle, who’s still touting his Steady State model), but as a rule they’re not taken seriously by the rest of the scientific community. There was a time when the evidence was incomplete, and it was reasonable to doubt the BB, but since then, we’ve gathered enough evidence that all reasonable cosmologists have come around to accepting it.

Just to further clarify: Scientists don’t say that ‘nothing’ existed before the Big Bang. What they say is that we have a scientific model of how the universe operates, and it explains events that occured up to a point where the Universe as we know it seems to have been very small. What happened before then is simply not part of our scientific knowledge, so the correct answer is, “Science currently has nothing whatsoever to say about events before that time”.

pohjonen - It’s no easy subject. But you basically have it right. Our visible universe (what we can see) was once but a speck. Consider the fact that the universe is expanding. That means that in the past, it was smaller. Keep going back and you’ll calculate that the visible universe was a speck about 12-15 billion years ago. By definition, the universe is everything…matter, energy, space, and time.

In the beginning, that speck rapidly expanded and we call that event the Big Bang. That expansion of space carried lots of energy in some type of plasma or something (still an area of research). As space expanded, that energy was dispersed…so it cooled. Eventually it cooled enough that the particles in that plasma could come together to form atoms of matter. Gravity pulled the atoms together into stars and galaxies.

Unknowns (there are many, here are a few)…
What was that speck like?
Where did that speck come from?
Why did it suddenly expand?
Is anything outside of that speck (our universe)?
What was that plasma like? (a quark-gluon kind of thing?)

Anything “outside” or “before” our universe seems to be unknowable (because we cannot test/see anything that is beyond our universe) & may not even exist (consider Hawking’s question “what is north of the North Pole?”). So, sometimes people say it’s Nothing and sometimes people speculate about all kinds of wild things.

Big Bang Theory is the most widely accepted scientific Theory about the beginning of the universe. Some cosmologists don’t agree with it at all, but they are in the minority. Most do agree but, as good scientists, they continue to seek improvements & more completeness for the Theory. Of all the theories out there, Big Bang Theory best fits the evidence we see.

oh yeah, one important thing to remember about BB…

It was not an explosion of stuff into empty space. It was the creation of space/time/etc. and the rapid expansion of space. The universe is apparently self contained and has no center or edge in 3D space. Expansion occurs in all directions at essentially every point in the universe.

Ultrafilter - Correct. Current evidence is that the universe is “flat” (not “open” or “closed”) which does not mean flat like a pancake but rather (hope I get this right!) Euclidean in geometry, infinite in extent, and may stop expanding when T=eternity…unless the expansion is indeed acclerating due to Dark Energy/Quintessence/whatever-you-wanna-call-it.

*Originally posted by Phobos *
…does not mean flat like a pancake but rather (hope I get this right!) Euclidean in geometry…

The consensus seems to be emerging for an open universe, at least according to the January 2001 Scientific American. The linked article is a good summary for intelligent laymen like us.

So there wasn’t “nothing”. There was s “speck”. Thank you all for your contributions. My understanding, limited tho it was, was correct. But frankly my imagination is still pretty strained. That everything could have been so “compressed”. I mean, there’s a lot of “stuff” now. But thanks, all.

Minor quibble, Elvis. As I understand it, the emerging consensus is for the universe to be flat (i.e. zero curvature, so space is Euclidean), but with a cosmological constant (so that the amount of matter/radiation alone is not enough to keep the universe from being open).

That is, there are three parameters that sum to 1 (we’ll call them K (from curvature), L (from cosmological constant), and M (from matter/radiation)). Current best guesses, from the boomerang papers (I’ll find the cite later) are K = 0 (flat universe), L ~ 0.7 (non-zero cosmological constant), and M ~ 0.3 (sub-critical amount of matter). If M were 0.3 and L were 0, THEN the universe would be open.

I find it interesting that the only person mentioned who supports an alternative to the Big Burble Theory is a dead person.

There are others. The last issue of Science News has as its cover story a (fairly new) alternative to BBT out of Princeton U.

Some of us NON-Cosmologists also find some dubious aspects to the BBT. I’m one of these, although my concerns are more about what a nearly theological theory, the BBT, is doing to the rest of science, particularly physics. See, for example, my very own thread Should Congress Outlaw the “Big Bag” Theory?

As to the (“May he be chortling with glee.”) Cosmologist Fred Hoyle, some of his views can be found (in a highly distorted version) in this post titled Fred Hoyle is dead.

I don’t know if you’re still reading this, pohjonen, but if so, here is the “layman’s version” of Ekpyrotic Theory, an alternative to the Big Bang Theory: Prof. Paul J. Steinhardt of Princeton University. (Prof. Steinhardt’s homepage is here.)

The Science News article on Ekpyrotic Theory, When Branes Collide, can be found here; and a really deep version from Los Alamos National Labs can be found at this link.

Never let it be said that Sea Sorbust failed to provide specifics. 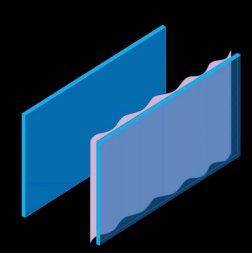 A controversial new theory proposes that our universe existed as a cold, featureless void for eons, until a parallel universe floating through a hidden fifth dimension crashed into it, igniting the Big Bang.