I dropped a piece of chicken in the garden while eating and a bee kept landing on it. I looked down a few moments later and there were two bees! Now it’s totally gone.

What, exactly, do you mean when you say “bee”?

Not the chubby bumblebees. They had yellow & black stripes, though. Maybe wasps?

I think yellow jackets will. They’re the bastards of the family. I don’t think a honeybee would be interested.

Lol. I think what you saw was a yellow jacket.

There around 40,000 species of bees and wasps with diverse natures—that’s why I asked to bee more specific. 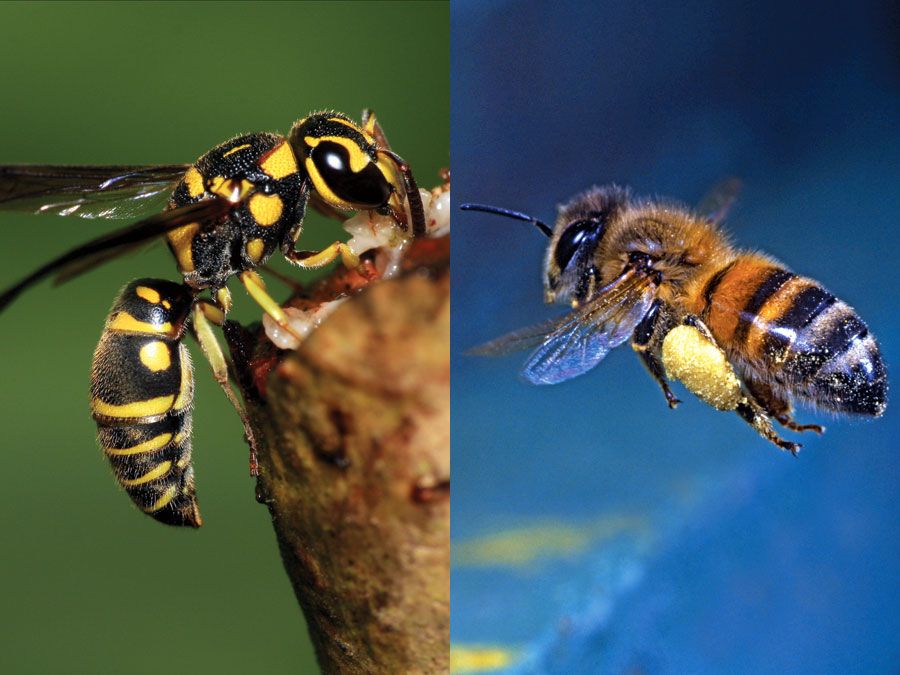 What’s the Difference Between a Bee and a Wasp?

Who is that stinging you?

And remember Samson’s riddle: Judges 14:14: “Out of the eater, something to eat; out of the strong, something sweet.” The answer: The riddle was impossible to discern with deduction alone, since it was based on a private experience of Samson’s, who killed a young lion and found bees and honey in its corpse. Hence, the answer to the riddle is as follows: “What is sweeter than honey? What is stronger than a lion?”

One of those guys landed in my beer just a few hours ago.

Thank you, but I live in Pennsylvania, so hopefully it’s not vulture bees!

North American yellowjackets definitely will. I was once on a patio talking to friends with a small piece of uneaten steak on my plate. A yellowjacket landed on it, would carefully chew a strip free, rolling it up like a piece of carpet as it went along, then flew off with it. It returned several times (or maybe it was several yellowjackets; I didn’t ask it) to pull another tiny roll off.

@Filbert is /was a beekeeper and would know this one

I found out that yellow jackets are carnivorous when we called in a dead possum to animal control. When she came out to pick it up, it was swarming with the little bastards. She had to throw a coat over it and wait for them to dissipate before she could claim the carcass.

I use chunks of gnawed left-over chicken as bait in my yellow jacket traps (in PA). It works.

Next time send a photo of the bee. Honeybees and bumblebees are fuzzy, yellowjackets and wasps are hairless. Their flight patterns are all distinct. Yellowjackets in particular tend to zigzag more. (There are some wasps that have fuzz, in particular a wasp called a “velvet ant”, I’m pretending I didn’t just remember that)

Bees generally only eat liquid and tiny grains like pollen- that’s what their mouthparts are adapted for, so it probably would have been some kind of wasp that you saw.
On the wider topic; traditionally one of the divisions between wasps* and bees was considered to be that bees are strict herbivores, while wasps are not. Like many of the traditional rules in biology though, it’s probably better as a guideline- as well as the carrion/vulture bees previously mentioned, there’s also a lot of species of ‘sweat bees’ which are drawn to drinking sweat for the tasty salty minerals, however that fits in the classification system. Even honey bees have been seen feeding on stuff like urine and faeces- again probably for the minerals, and quite possibly to feed to the larvae- so although I’m not aware of any records other than that crappy biblical ‘riddle’ (honestly, it’s worse than ‘what have I got in my pocketses’) saying honeybees eat meat, and they certainly don’t do it on a regular basis, slurping up the odd bit of blood or liquifying meat may well not be too much of a stretch if they got the opportunity. It’s not as though bees have a concept of yuck.

Best not to think about too much probably. Honey, anyone?

* For a given value of wasp- there’s a whole bunch of stuff called wasps as well as the ones people usually think of. Wood wasps, in the broader hymenopteran group, pretty much just eat wood. Probably.

There are also hoverflies, actual flies who are bee mimics. They don’t eat animal matter as far as I know but they’d lay their eggs on it.

And remember Samson’s riddle : Judges 14:14: “Out of the eater, something to eat; out of the strong, something sweet.” The answer: The riddle was impossible to discern with deduction alone, since it was based on a private experience of Samson’s, who killed a young lion and found bees and honey in its corpse. Hence, the answer to the riddle is as follows: “What is sweeter than honey? What is stronger than a lion?”

The first thingh can came into my head on reading the thread title.

I believe some have suggested that the story was inspired by seeing what appeared to be bees in an animal carcass, but which were actually a variety of fly. I can’t find the reference right now.

On the other hand, it might be that they saw wasps. as others have noted, wasps do eat meat, and might be expected to be found in an animal carcass.

There’s apparently a long history of believing in spontaneous generation of bees. wasps, etc. from animal carcasses in that part of the world. It lead to a ritua;:

In the ancient Mediterranean region, bugonia or bougonia was a ritual based on the belief that bees were spontaneously (equivocally) generated from a cow's carcass, although it is possible that the ritual had more currency as a poetic and learned trope than as an actual practice. A detailed description of the bugonia process can be found in Byzantine Geoponica: Build a house, ten cubits high, with all the sides of equal dimensions, with one door, and four windows, one on each side; put an ox i...

It never occurred to me to think the story meant the bees were eating the lion, just that they were nesting in it.

I too will say yellowjackets. They’re awful this time of year. We tried to have a picnic with the grandkids in the zoo’s park this past weekend and they were swarming everywhere. They were crawling on our food, hovering over our drinks, just being very annoying. Of course, the kids were sure they were going to be stung so they ate a couple of bites and headed to the playground. In our area, it’s almost impossible to eat outside in the early fall because of the yellowjackets. And yes I know it isn’t fall until the 22nd, but to me, fall starts on Sept 1.

I never knew that! Now I want to try meat honey…