Our offices at work have dry erase boards. Every time I grab a marker, it’s dry. Or nearly dry. We buy new ones. They work for a very short time. And then they’re dry.

Yes, I am conscientious about keeping the caps on.

I suspect at least one of the following:

In any case, if I were you, I’d go out and buy a couple of my own and keep them with me to use as my own personal markers.

If you are a heavy user, you can get the refillable ones, like Pilot Board Master.

There are many alternatives for office use, like those huge blocks of paper you can prop up on an easel and write on with literally whatever. Or, on the existing whiteboards, you could try something like those “liquid chalk” markers (water-based)—that’s wet-erase, though.

I haven’t tried these but… 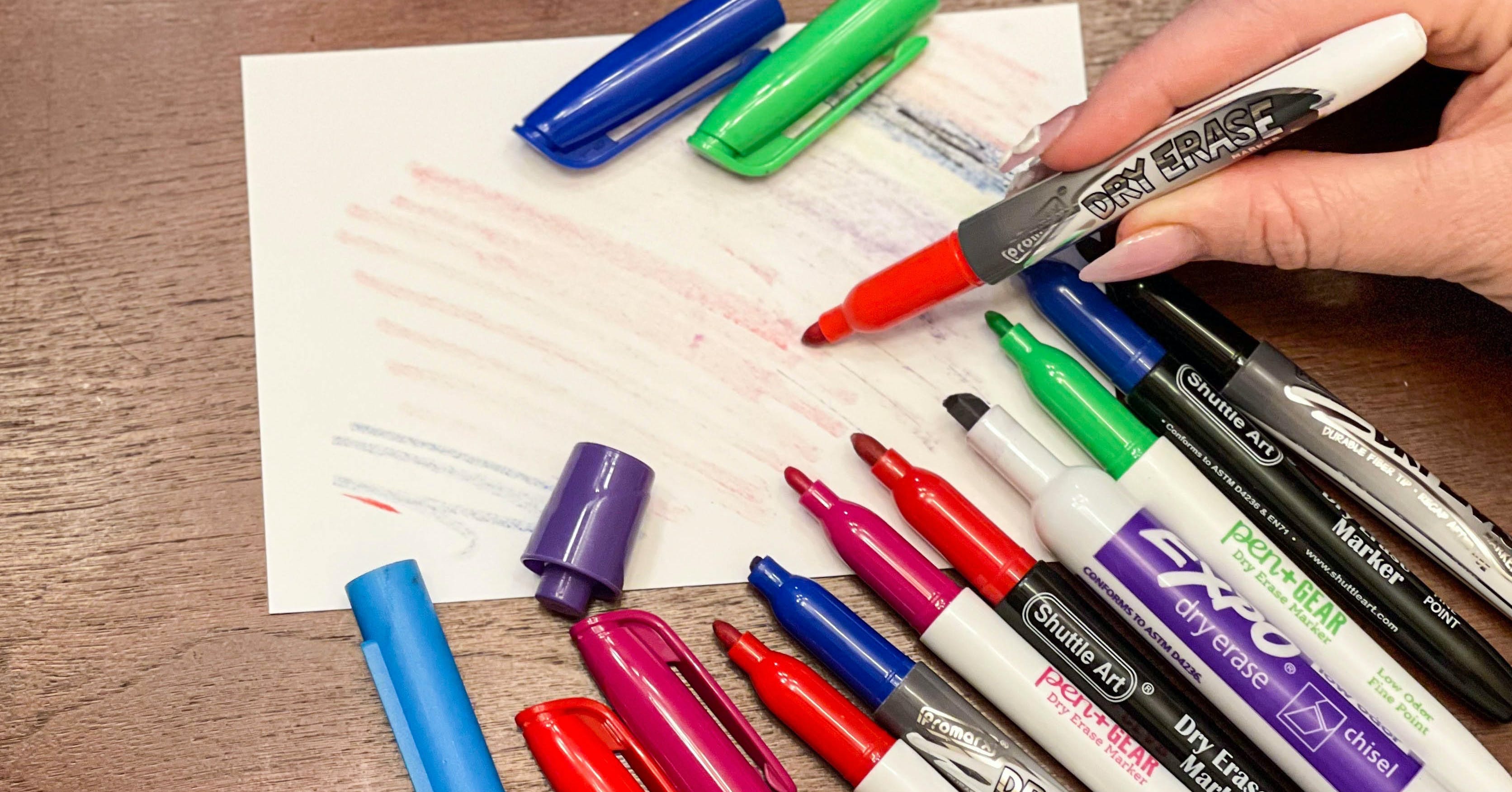 There must be dozens of dried markers strewn about my house. And I can’t blame it all on the kids — I’ve destroyed more than my share of markers because of misplaced caps. While some markers may be...

Of all the inventions of the last 100 years, dry erase boards are probably the most remarkable.

I used to have a problem with my Sharpies drying out too then I read an incredibly simple tip I’d never thought about–store them with the caps DOWN. Yes, this means you can’t easily tell what color pen you’re going for BUT it keeps the tips moist and my Sharpies are lasting about a kazillion times longer than they used to. I don’t have a use for dry erase markers but maybe this would help those too?

. . . . dry erase boards are probably the most remarkable.

Well yeah, as long as you can erase the prior layers of old text, you can keep remarking them. But old-fashioned chalkboards were remarkable too.

On top of all this, those dry-erase markers exude powerful fumes which I’m sure are toxic after continued exposure.

I have a dry erase memo board at home with a calendar section where I keep track of my schedule for the month. My gripe is that the pens for it, despite being called “fine point”, draw a thick enough line that it’s hard to write legibly in the space provided for each day.

Well yeah, as long as you can erase the prior layers of old text, you can keep remarking them.

I used to take two erasers that been used a lot, squeeze a little dish soap on one, wet each thoroughly and rub them against each other vigorously under running water. Once no further ink came out, then set aside and let dry to extend their use. You can get some extra life out of them that way.

I used this; a co-worker told me it resurfaces the whiteboard.

Ensure easy cleaning with Expo white board care 8 oz. Liquid cleaner. This cleaner is ideal for cleaning and refreshing whiteboards. It helps remove ghosting, stubborn marks, shadowing, grease and dirt from whiteboards and most non-porous surfaces....

They make dry erase markers intended for artists. They cost more, but are not big and fat, come in sets with many colours, each marker has the eraser on the end, like a pencil would. So far none have dried out for me. I think the maker is Shuttle Art, I got them from Amazon, and am loving them!

(Some of the darker green colours, if left on long enough, will leave a ghost image after dry erasing. A damp tissue removes it however! )

Hmm on the “resurfacing”. The whiteboard is melamine, and the spray contains something like alcohol and ether? So it should not dissolve the board too much.

Oh, it definitely helps. But I still can’t get anyone else at work to store them point down.

Hmm on the “resurfacing”. The whiteboard is melamine, and the spray contains something like alcohol and ether? So it should not dissolve the board too much.

He told me that years ago; IIRC he was saying kind of the opposite, like the cleaner filled in rough patches or something. At the time I knew little about whiteboards, so I filed it for future reference.

I found this from Bob Vila with some tips. For instance:

The best practice for keeping your whiteboard clean is to erase any markings when you’re done using it. Always wait until the markings have dried completely before erasing them to avoid ghosting, but note that markings that stay on the board for longer than a day or two are more likely to leave stains behind.

The liquid I posted the link for—it evaporated fairly quickly. Bob recommended drying the board, but maybe that’s for the other liquids people might use.

They are just being passive aggressive. Sulking because they know that they aren’t permanent. Tell them how valued they are.

Yeah, but can they still get you high?

Just write over the top of the old writing with new writing, then erase it. If it’s just a few words it’s faster and easier than breaking out the alcohol.

But I still can’t get anyone else at work to store them point down.

Genius Tip: When you get one that is truly dead, throw it away, but keep the cap! Put it on a good one, on the other end!

It’s ALWAYS tip down then!

(No, seriously. This way, it pokes out of the coffee cup with the color of the cap, but is actually point down. Usually only works on your own desk.)

I bought a small box of dry erase markers for a board at work over 7 years ago. I’ve gone through only a few of them over the years. They last forever.

You have some shitty markers.

…store them with the caps DOWN. Yes, this means you can’t easily tell what color pen you’re going for…

If you have at least 2 of the same color, you can use one to put color on the non-writing end of the other. Then when you store it cap down you can still see what color it is.