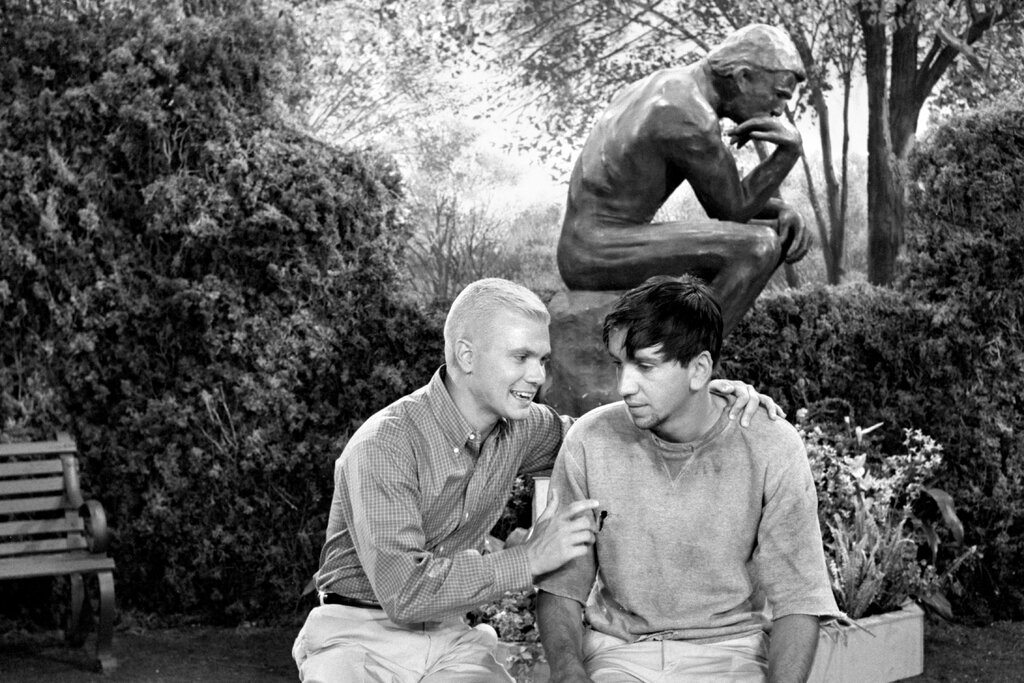 He went on to appear in movies and other TV shows and to work as a television executive, but the role of Dobie would dog him for decades.

I loved that show. I found it recently on some streaming service, and it has aged well. A lot of clever running gags. Good ensemble. RIP, Dobie.

Maynard G. Krebs: the “G” stands for Walter. I mainly remember Tuesday Weld in that show.

… Followed on Tuesday nights by “Next, on Combat!…”
(I can’t listen to the first without hearing the second.)

I loved that show.

I also loved that show.

Max Shulman was a brilliant writer of comic novels, all of which are forgotten today. He first wrote Dobie as a college student and had to relent when the network insisted on a high school show. No matter, he wrote most of the first season by himself, bringing the characters’ language up to college level with the wittiest, brightest dialog of any show on television. Hickman played Dobie as a deliberate homage to Jack Benny, the beleaguered center surrounded by a wonderfully cast group of eccentrics somehow grounded in the real world. What other show of the 50s had the father regularly sighing, “I gotta kill that boy.” (First season only: the network nixed that too.)

Everybody on the show was so perfect in their characters that they typecast themselves out of show business. Warren Beatty and Tuesday Weld presciently left before the first season ended. Steve Franken couldn’t overcome playing Chatsworth Osborne, Jr., Sheila James would always be Zelda, Florida Friebus would be the scatterbrained mother, and poor Bob Denver parleyed Maynard into Gilligan in a way that haunted him for the rest of his life. And Dwayne Hickman always played Dobie even in …shudder… Dr. Goldfoot and the Bikini Machine.

The network found fifty ways to undercut the show, so only about a season and a half total are really top quality. Those hold their own against any series of the time, even the more famous ones.

The Many Loves of Dobie Gillis was a major influence on the characters for another successful CBS program, the Hanna-Barbera Saturday morning cartoon Scooby-Doo, Where Are You! , which ran on the network from 1969 to 1970 followed by several spin-offs. As confirmed by series creators Joe Ruby and Ken Spears[28] and writer Mark Evanier,[29] the four teenaged lead characters of Scooby-Doo were based on four of the lead characters from Dobie Gillis : Fred Jones on Dobie, Daphne Blake on Thalia, Velma Dinkley on Zelda, and Shaggy Rogers on Maynard.

I only ever knew him as the guy from Cat Ballou. “Hallelujah, brothers…”

Dwayne Hickman was a part of my childhood. It was rerun regularly in the 1970’s.

Poor Bob went from hip beatnik in the first season to doofus for the rest of the show. One of the network’s fifty ways…

I loved Dobie Gillis, too. The one with the Martians was one of my favorite.

I remember some critic saying it was too talky, but that’s what I loved about – all the word play. So much fun.

… Followed on Tuesday nights by “Next, on Combat! …”
(I can’t listen to the first without hearing the second.)

Yes! I loved both shows, and still covet Zelda Gilroy.

What other show of the 50s had the father regularly sighing, “I gotta kill that boy.”

Winnie: “Now Herbert, he’s half mine.”
Herbert: “Then I gotta kill my half.”

I had a crush on Zelda too. She (Sheila James) was glammed up once with a blonde wig in an episode of The Beverly Hillbillies. She was incredibly hot!

Looks like I’ll be the one to say it:
Rest in peace, Poopsie.

… Followed on Tuesday nights by “Next, on Combat! …”
(I can’t listen to the first without hearing the second.)

We used to be able to hear gunfire from the filming of Combat in the old backlot across the La Ballona creek when I was a kid.

Thalia Menninger and Milton Armitrage are awesome names to use when a fake name is needed. Herbert T. Gillis fought in the big one: WWII. Dubya dubya two.

On occasion, you could see automobiles in the background, driving along the road next to the lot. I never caught these watching the show, but I have seen clips in which they were fairly obvious once you knew where to look.

Just saw my first Dobie Gillis episode on Sunday. I said, “Hey, that guy played Molly Shannon’s Dad in Night At the Roxbury. He’s great!” Went to look up the IMDB for Dwayne Hickman, and…huh? This says he died today. : ( And on Bob Denver’s birthday too.