Easy recipes or other suggestions for leftover ham

So, on Sunday I had a craving for ham. Since I waited until Easter morning to develop this craving instead of planning ahead, my grocery store was picked pretty clean. I did manage to get the last spiral cut honey ham. It comes in two sizes, half and quarter, but they were out of the quarter size. So I got the half.

And that is a LOT of ham. I’m freezing some and giving some away. I’ve had lots of ham sandwiches and I put some in mac and cheese. I bought some crescent rolls. I added it to lentil soup. Luckily I really like ham.

And this ham happens to be an extraordinarily flavorful one, I think it came from the laziest and most sedentary pig on the farm.

But I am going to run out of ideas before I run out of ham. So I’m looking for suggestions.

If you want cheesy comfort food, it’s hard to beat ham and scalloped potatoes. Recipes are all over the place. Just don’t skimp on the cheese.

Ham-and-cheese omelettes are popular. I don’t much like eggs, so my alternative would be a ham-and-cheese breakfast quesadilla, with tomatoes and salsa verde.

Ham steak with red-eye gravy might appeal to you, possibly with grits or biscuits.

If you want cheesy comfort food, it’s hard to beat ham and scalloped potatoes. Recipes are all over the place.

If that’s not easy enough, use pre-cut boxed potatoes.

Colcannon - basically mashed potatoes with a bunch of ham, cheese, and cabbage - I like to add green onion as well

Here’s a recipe I like to make when I have leftover ham. It’s a bit different from the usual treatments. Works best when you have leftover turkey, too.

Make a white sauce with the butter, flour and milk.

Add sherry, mustard and half the cheese. Stir till smooth. Top turkey and ham mixture with sauce. Add the remaining cheese, with nuts if desired.

Bake at 350F for 25-35 minutes, or until sauce is bubbling. Serve over rice or noodles.

Colcannon - basically mashed potatoes with a bunch of ham, cheese, and cabbage - I like to add green onion as well

Huh. I’ve actually never made it with ham (or cheese, for that matter). I’ll have to try next time.

Make Potatoes au gratin with hash browns instead of discs. Easier to get the proper fork full.

Freeze even more of it.

Make Potatoes au gratin with hash browns instead of discs. Easier to get the proper fork full.

Do what you like but cheesy hash browns lack any interesting texture IMHO.

A traditional hot brown is made with sliced turkey but if you want to use ham, I’m not going to tell you you’re wrong. It’s slightly atypical but tasty.

Plain old ham and eggs is one of the best meals ever, and not just for breakfast. I like it with hash browns and hot buttered toast. :o

These egg muffins are super good, add the veggies, cheese and spices to your taste. You can dice up the ham and freeze it in prep to make these. 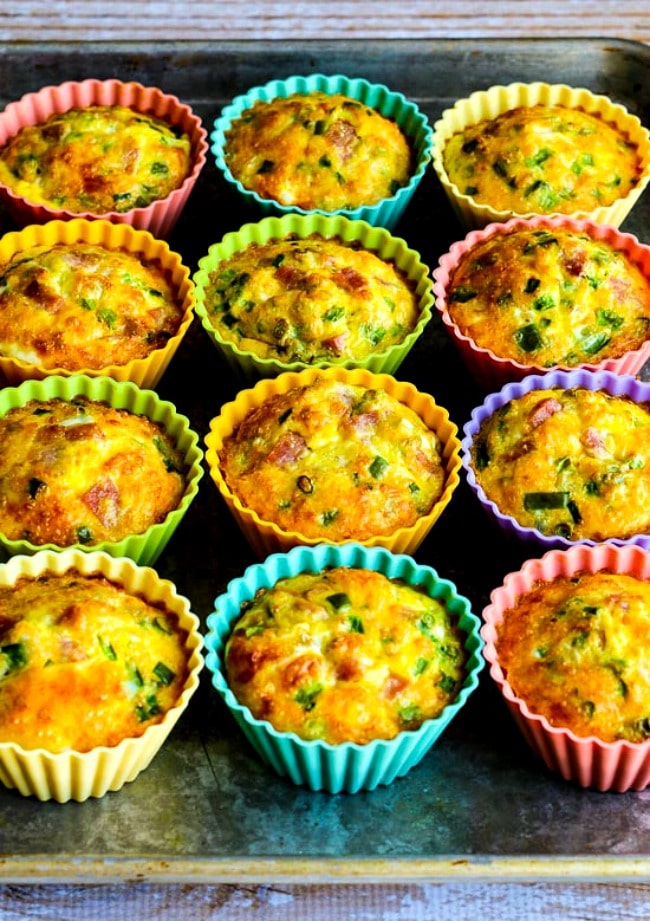 I love having some of these Egg Muffins with Ham, Cheese, and Bell Pepper in the fridge for a quick and tasty grab-and-go breakfast!

Thanks everyone. It all sounds good. The items with cheese and potatoes sound especially interesting. Because cheese, always my favorite food. And I’ve been on a potato kick lately, not sure why, I typically prefer rice or pasta.

And, Alpha Twit, I’m well aware of the Hot Brown sandwich. My mom grew up in Louisville and it’s been a family favorite for years. We joke that we would’ve given up turkey for Thanksgiving years ago if it weren’t for our Hot Browns the day after. Maybe I will try it with ham. Or Eggs Benedict with ham instead of Canadian Bacon.

Do you still have the ham bone? Use it to make some ham and bean soup.

Do you still have the ham bone? Use it to make some ham and bean soup.

I always use up ham in an old recipe I’ve been making for years. It’s a white lasagna with ham and swiss cheese–delicious and technically easy to make but lots of steps make it a Saturday project (like the soup).

Holler if you want the recipe.

I recently made this crock pot ham & potato soup & it was delicious! https://dinnerthendessert.com/slow-cooker-ham-potato-soup/

Make some ham biscuits and ham, egg, and cheese English muffins for the freezer.

From The Joy of Cooking: “Two people and one ham.”

Was going to mention FrenchCanadian split pea soup, but your ham and lentil soup probably already covered that one.

I muffed the quote:

From The Joy of Cooking: “Eternity is two people and one ham.”