Elden Ring seems to already be Game of the Year...but do I want to play it?

I know, this is all subjective. Everyone has their likes and dislikes which is fine.

I was looking at reviews of Elden Ring and they are gushing with praise. 10/10 almost across the board. I know reviews are not everything but, when pretty much everyone is singing praises there is a legitimately good game there.

My problem is, this is an ancestor to Dark Souls games and apparently has the same extreme difficulty that made those games famous. The world they made looks amazing yet still…sooner or later you have to grind and grind through battles that are extremely difficult.

For me, at over 50, I just don’t have the twitch reactions I had when I was 20. At 50, with work and life, gaming is something I want to enjoy and not grind, grind, grind on. I don’t feel special when I beat such battles, I feel lucky and relieved.

Yet, Elden Ring truly does seem a gaming masterpiece and I would love to try it out.

You don’t need twitch reflexes for the Souls games like in FPSes! Both your character and the enemies have long attack animations that they have to commit to(no cancelling moves mid-animation like Devil May Cry). You can always turtle behind a shield and learn the enemies’ movesets before you try to take them down.

After reading and watching some reviews, a lot of them mention that for Elden Ring, the open world is so expansive, that you can always go somewhere else if you’re stuck on a particular area/boss. Come back later with more levels/better gear in your belt and try again!

Another thing to keep in mind is that you can always get some help in the form of jolly co-operation. This time around, other players cannot invade you unless you have already summoned someone to help you out/you manually enable it. Several multiplayer covenants(guilds) reward members for helping others out, so you should be able to find help pretty quickly.

Souls-likes aren’t about twitch reflexes. They are about persistence. You will die over and over and over again until you learn the patterns about techniques for the area currently murdering you without pity.

There are a lot of people for whom this is a gaming ideal. They like the feeling of accomplishment from finally breaking through a section that’s been kicking their ass.

To me it feels like banging my head against a brick wall until my blood and tears erode the mortar enough for me to claw through to the next punishment.

That said, I have been paying attention to this because of how much positive press it’s been getting. I saw a blurb at one point that they were trying to make the game somehow more accessible without making it less difficult?

For me, the question isn’t whether people who love Souls-likes love Elden Ring. Of course they do. It’s about how sane, reasonable gamers like me feel about it.

For me, the question isn’t whether people who love Souls-likes love Elden Ring. Of course they do. It’s about how sane, reasonable gamers like me feel about it.

You said it much better than I ever could.

I do not mind difficulty but I hate “learning the pattern to beat enemy-X, then Y, then Z, then A, B & C.” That is not fun. That is the definition of a grind. It’s not fun (to me).

My main gripe about Dark Souls is that enemies respawn in areas you’ve already cleared, so if there was an area I had difficulty with but finally beat, I might have to play through it multiple times (which I was reluctant to do, especially for areas with platforming-type elements which I’m not a fan of). Is this the case with Elden Ring?

I’m assuming respawning enemies will still be present. Otherwise, you could keep losing all your runes(currency) and end up digging yourself into a hole. So far, only Dark Souls 2 has let you despawn enemies(after 12 kills), but in that game you had options to repopulate the cleared areas with enemies again.

I do not play Souls-like games as a general rule and only played Dark Souls 2 until I lost to the tutorial boss 3-4 times and got bored. I’m pushing 50 and have the same basic “Games better be fun or hella interesting to invest my time in” feelings as others mentioned. But I decided to give this a whirl for various reasons* and will be happy to report back after the weekend if I’m getting drawn in despite the Souls aspects or if I’ve bounced off it in a fit of righteous gamer anger that “this is total bullshit”.

*Reasons including people gushing about the story-telling and world building and hope that the open aspect makes it easier to absorb some of that before getting squashed. Or finding ways around getting squashed. And I do enjoy a good fantasy epic and open world game. Also it looks pretty and I have a beefy system so I hope to enjoy that. Also I haven’t bought a new game for over $20 in a long while and this was 20% off so it won’t be the end of the world if I only play it through the weekend. And probably other reasons I’m forgetting.

I’ve played and beaten all of the Soulsborne games (except Sekiro, couldn’t beat it) and own all the Future Press hard back strategy guides (highly recommend). I was planning on waiting to play this game until the summer because they take a long time for me to beat and I’m neck deep in other games right now but the reviews are so over the top crazy good I’m going to play it this weekend. I’ve really never seen a video game so universally acclaimed other than BotW maybe? 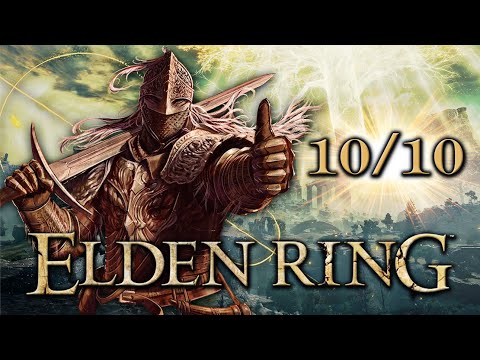 Every review points out that ER goes out of its way to make things more accessible.

As a total aside (and I have not played the game) does anyone else think that tree is reminiscent of Laurelin from the Silmarillion (Lord of the Rings)?

Is it true you can’t pause?

The only soulslike that you could pause was Sekiro, as it was a purely single-player game. However, you can quit to the main menu, and when you continue, you’ll be exactly where you were previously. Only exception would be boss fights; those will send you back to the room right before the fight.

For any Souls-like fans who get the game, please report back about the difficulty/accessibility relative to the other games.

The reviews are universally glowing, but my main concern remains: I don’t want to spend a bunch of money on a nut-kicking simulator,* even if it is the most elegant and beautiful one ever conceived.

*that is not a judgement about those of you with sterner nuts than I.

It looks very cool; I especially like the fact that you can retry boss fights quickly without having to run all the way back from your last save point.

But it looks like there are still a lot of platform game elements (e.g. running along narrow bridges, jumping across gaps) which are some of my least favourite parts.

For any Souls-like fans who get the game, please report back about the difficulty/accessibility relative to the other games.

I hate to ask but, is there a difficulty slider/selection?

I have no idea.

I hate to ask but, is there a difficulty slider/selection?

No, just the one difficulty setting.

I also am massively interested in this game, but I HATE overly difficult games. I don’t get why there can’t be a “I’m a wimp” version of the game.

Maybe some kind of trainer I can use?

Yeah. I get that the design philosophy is quite literally “prepare to die,” but these games are supposed to have phenomenal level design, deep combat systems, varied monsters and boss fights, tons of character customization options… all of which would be just as good with a difficultly slider.

But there are absolutely gamers out there who sneer at ‘casuals’ who refuse to put the effort into ‘getting good.’ The mystique behind the impenetrable difficulty is definitely part of the selling point.

I also am massively interested in this game, but I HATE overly difficult games. I don’t get why there can’t be a “I’m a wimp” version of the game.

You can always summon other players to help you with boss fights. With luck, you just need to stay back and stay alive while they pulverize the bosses for you.

But there are absolutely gamers out there who sneer at ‘casuals’ who refuse to put the effort into ‘getting good.’ The mystique behind the impenetrable difficulty is definitely part of the selling point.

While getting older has certainly played a part in me not being as good at these games it has also rendered me completely immune to giving a shit if someone sneers at me and tells me to, “git gud.”

I played “God of War” on easy mode on PS4 and I had a good time and was just fine with it. To each their own.

I know you are not berating people. I’m just saying…