(By equivalent I mean conveying the same idea. Sort of. Not direct translations.)

What made me think of this: I had an appointment to take my cat to the vet this morning for her annual shots. I must have unconsciously telegraphed to her what was about to happen (or they really can read our minds), because she promptly vanished. I suspect she fled under the house, and I fully expected her to stay there all day and most of tonight to punish me. But when I got home from the grocery store, there she was sitting nonchalantly in the living room (we have a kitty door), and the expression that popped in my head was “butter wouldn’t melt in her mouth.” What is an equivalent expression in (pick a language) – ?

I was in a choir one time with a woman from Austria who had only lived in Texas for a couple of years. We taught her some local expressions like, “I don’t give a rat’s ass,” “all hat and no cattle,” and stuff like that. Are there equivalents in other languages (I’m sure there are)?

I don’t know any other languages, even the ones I studied in school. Besides, in Catholic school, the nuns didn’t teach us the interesting expressions. Suggest some other examples, please.

How various Europeans say “It’s all Greek to me”:

r/europe - It's Greek to me 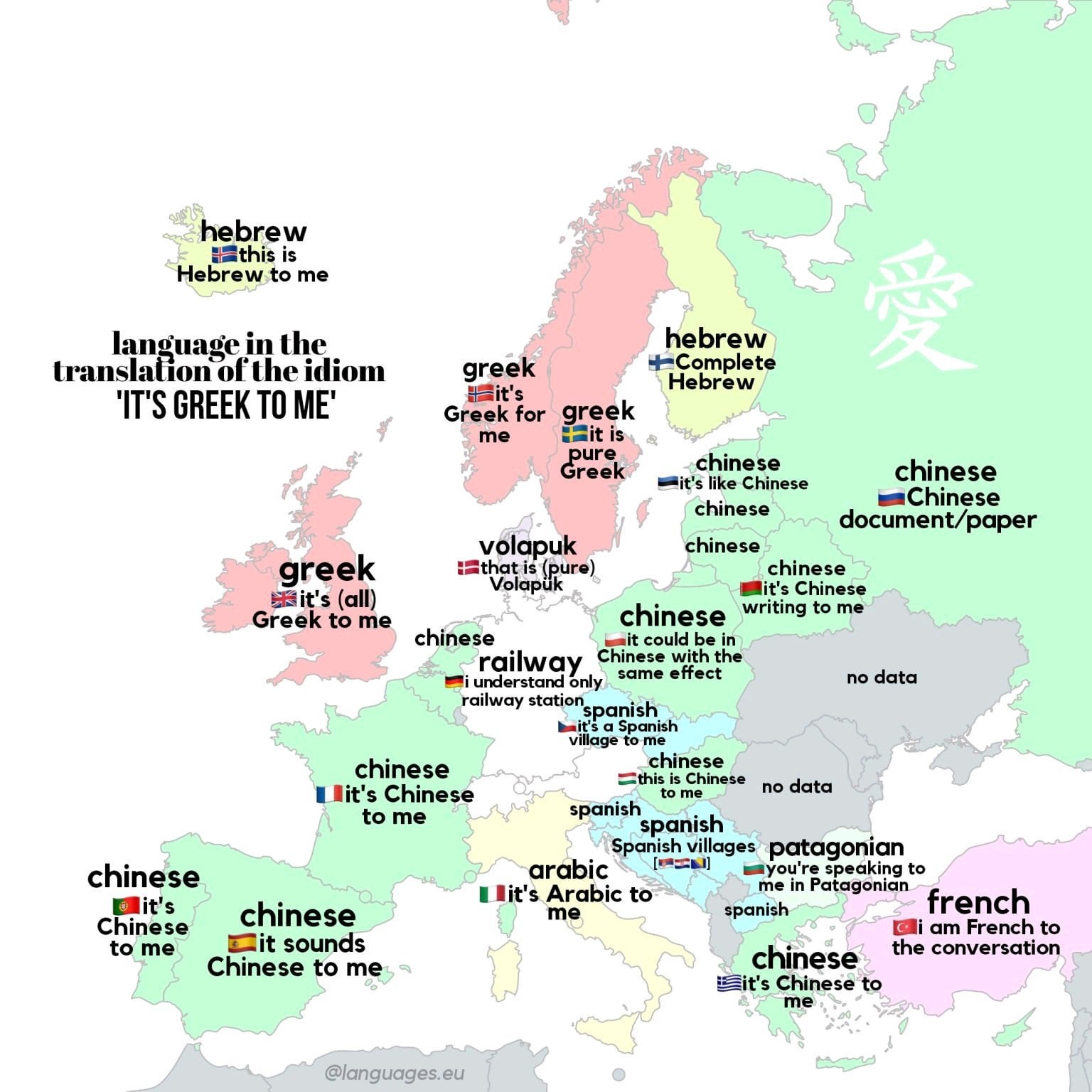 I just chimed in to say “proverbs,” “proverbial phrases,” and “idioms,” to help as search terms. (Both of the examples so far are proverbs.)

I suspect that most of the good ones won’t translate well.

A common device across many languages is “more…than…”, taking the comparison into the absurd to make a point in an amusing way.

In Spanish: Hungrier than a snail on a mirror.

That’s all for now, off the top of my head. There are many more. Most are offensive or gross, and I haven’t found a good selection online to choose the best.

Sort of related to that construction, there’s an expression that I’ve always liked: “No sirve ni para esconderse.” My not-very-funny translation: “He’s so useless he can’t even play hide-and-seek.”

Equivalent to the English “eat like a horse” is the French manger comme quatre (literally “eat like four [people]”).

all hat and no cattle

Is that the same as “All hat and no cowboy”?

I have a really good one.

At the closing ceremony of a chess event held in Germany, one of our British team was asked to translate the host’s speech into English (as our chap spoke fluent German.)

About halfway through the usual platitudes, the German team leant forward. Clearly some interesting translating was coming up.

In Britain we say “That’s my cup of tea” (“my” can be any pronoun) to mean that something is pleasing or suitable for me (or whatever pronoun).

I remember a Spanish friend telling me that the equivalent in spanish is that something is your “half orange”.

On googling now though, it seems maybe the scope is more limited and it is just talking about relationships. Ah well, it seemed cute though.

the expression that popped in my head was “butter wouldn’t melt in her mouth.”

I googled and found the following offered as a German equivalent:
Sie sieht aus, als ob sie kein Wässerchen trüben könnte.
? She looks as though no water could tarnish her. ?

Our German dopers can comment on whether that expression is known or would be understood in German.

? She looks as though no water could tarnish her. ?

Please tell me this is on a video somewhere, preferably YouTube!

I worked in a restaurant where the kitchen staff, or at least the chefs were Angolan, speaking Portuguese.

“Fila da puta” is analogous to “son of a bitch”, though “puta” means “whore” and the phrase is more insulting in Portuguese than English.

I imagine every language has an equivalent. Insults are, after all, the lingua franca of civilization.

In Britain we say “That’s my cup of tea” (“my” can be any pronoun) to mean that something is pleasing or suitable for me (or whatever pronoun).

I think I’ve only heard that in the negative here in the states; “Not my cup of tea”. “Right up my alley” is a more common phrase for the opposite.

Sie sieht aus, als ob sie kein Wässerchen trüben könnte.
? She looks as though no water could tarnish her. ?

That is a perfectly common German expression, but you got the translation backwards:
She looks like she could not cloud (a little - yes: diminutive here, to make it cute) water.
In Spanish you could say (with grammatically interesting double negation included): Mira como si no hubiese roto nunca un plato. (S)he looks like (s)he had never broken a dish in her/his life.

Well it is the least the interpreter could do, that is absolute standard. Funny how non professionals think the easy parts are difficult and the difficult parts are easy. Concerning the coals to Newcastle, in Spanish there are even several expressions for that, for instance “como llevar café a Colombia” (like taking coffee to Colombia) or “como llevar putas a París” (like bringing prostitutes to Paris). Context should tell you which of the two to use.

Please tell me this is on a video somewhere, preferably YouTube!

Sadly no - but it was an enjoyable moment.

Here are some that come close

“butter wouldn’t melt in her mouth.”

Hindi : Sau Sau Chuhe khakar, billi chali haj ko. (After eating hundreds of mice, the cat is leaving for the Haj pilgrimage.
Hindi : Bagula Bhagat. ( A heron devotee. This derives from a children’s story, where a Heron tells all the fishes in a pond that he has become a yogi and is meditating by the pond bank just till the fish get closer to him. )
Hindi : Dood ka Dhula ( Like someone is so clean as if she had bathed in milk. Like someone is spotless) (same idiom in Bengali too)

Bengali : Bal Cheda Gache ( TMI Alert - Like one of my pubic hairs were ripped off. (its so insignificant like getting a single pubic hair ripped off) (same idiom in Hindi too)
Punjabi: Sade Piyo da ki Janda hai (What does my dad have to lose )

all hat and no cattle

In Brazilian Portuguese, you can say “Quem não tem cão caça com gato.”
This means “One who doesn’t have a dog hunts with a cat”

There is a bit of a different nuance, as it implies using an imperfect tool, so if you are using slip-joint pliers to try to loosen a nut, hopefully without rounding it off, you might say “If you don’t have a dog, you hunt with a cat!”

@scudsucker, I’m not sure if that was a typo or a misremembered word…
The phase begins with filho, which is “son” (filha would be daughter), and both words have a “H” in the middle, pronounced like a Y when it comes after a consonant, so this sounds like “FEE-lyo”

I don’t speak Portuguese, so that was phonetic spelling, but the Angolans definitely pronounced it “feela” not “fee-lyo”. Probably a regional thing.

I was not brave enough to use the phrase in when I was in Portugal or Brazil, so I have no direct experience.

I missed the Angolan angle. Having never spoken with an Angolan, I have no idea how they pronounce things. That pronunciation would sound odd in Rio de Janeiro, though the message would definitely come through clearly.

My daughter once asked what “que sera sera” meant. I told her that it was Spanish for “c’est la vie”.