Today was the trading deadline in MLB, and various trades were made. This included one for Juan Soto from the Washington Nationals to the San Diego Padres. 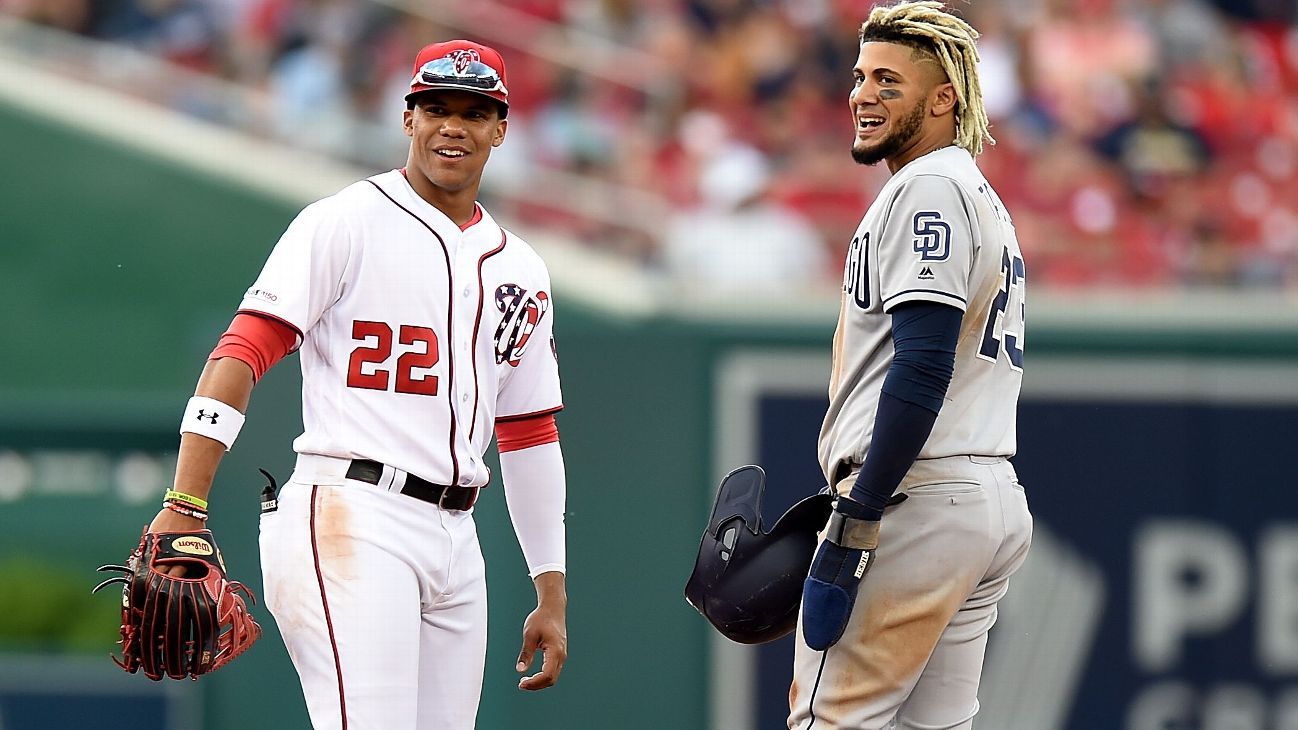 Biggest deal ever? What to make of blockbuster Juan Soto trade

San Diego's splash has the baseball world buzzing. Here's what it means for the Padres and the rest of MLB.

Whenever a trade like this is made, I can’t help but think the team getting the big name talent is fleecing the team getting prospects. Part of the reason for that is that it seems like it’s usually the same teams sending out top talent year after year. Even when they hit on a prospect or top draft pick that just means they have someone new to trade away in 4 - 5 years or so.

On the other hand, sometimes it works out. One example is the Herschel Walker trade from the Dallas Cowboys to the Minnesota Vikings in 1989.

The Herschel Walker trade was the largest player trade in the history of the National Football League. This deal on October 12, 1989, centered on sending running back Herschel Walker from the Dallas Cowboys to the Minnesota Vikings. Including Walker and a transaction involving the San Diego Chargers, the trade eventually involved 18 players and draft picks. At the time of the deal, the Cowboys were one of the worst teams in the league (the team finished the 1989 season with its worst post-m In hi...

What other examples are there where the team getting the prospects and / or draft picks ended up getting the better of the deal?

Not as bad as the Herschel Walker trade, but in 1974, the Green Bay Packers, desperate for a quarterback, sent five draft picks (two 1st round, two 2nd round, and a 3rd round) to the Los Angeles Rams, in a midseason trade, for 34-year-old QB John Hadl. Hadl was on the downside of his career, but he’d been an All-Pro in 1973, and finished #2 in MVP voting.

However, 1973 turned out to have been Hadl’s last good season, and he flailed around in '74 and ‘75 for the mediocre Packers, before they shipped him off to Houston. Meanwhile, the Rams used that windfall of picks to obtain several long-time starters, including defensive lineman Mike Fanning, and defensive backs Monte Jackson and Pat Thomas; the Rams also obtained defensive back Nolan Cromwell through trading another of the Packers’ picks.

The loss of several years’ worth of high draft capital haunted the Packers for years to come; fans in Green Bay referred to the Hadl trade as the “Lawrence Welk trade,” after the “champagne music” television bandleader, and how he’d start songs: “And a one, and a two, and a one-two-three.”

Not sure if this counts, but the New Orleans traded away their entire 1999 draft to Washington so they could take Texas star running back Ricky Williams.

Williams turned out to be a bust, but the Redskins (am I allowed to use that name? That was their name at the time) should have turned themselves into a Super Bowl-esque dynasty. It’s their own poor management fault they didn’t. That was a Herschel Walker-ish trade by the Redskins, who put themselves in prime position to succeed with the basket of picks in return but didn’t.

I think the classic one in MLB is the Boston Red Sox trading Jeff Bagwell to the Houston Astros for Larry Andersen.

Andersen filled a need down the stretch for the Red Sox, but giving away a future HoF first baseman with 449 homers (while playing half his career in the Astrodome) is just too much.

1964 - Brock for Broglio. A former 20-game winner who’d finished as high as 3rd in Cy Young voting, Broglio was an 18-game winner in 1963 and the Cardinals top starter. . It was a shock in both St. Louis and Chicago when the Cardinals traded Broglio to the Cubs for Lou Brock, an outfielder of shall we say erratic defensive skills and a .257 career batting average. It turned out that Broglio had chronic arm problems and he disappeared from baseball two years later. Brock, of course, played 15 more years and ended up in the Hall of Fame. And thanks to the maturing of Bob Gibson and a great rookie season by Ray Sadecki, the Cardinals didn’t lack for pitching.

Well, in 1996 the Lakers traded their starting center, Vlade Divac (now in the Basketball Hall of Fame) for the Hornet’s first round pick in that draft, Kobe Bryant. I think that might have worked out for the Lakers.

In 1993, the San Francisco 49ers traded future Hall of Famer Joe Montana to the Kansas City Chiefs; the Chiefs were looking to upgrade at quarterback, and due to Montana having been injured for much of 1991 and 1992 (as well as being 36 years old), the Niners had already decided to keep Steve Young as their starting QB.

In the trade, the Niners sent the Chiefs both Montana and safety David Whitmore, in exchange for the Chiefs’ first-round pick that year; the Niners selected defensive tackle Dana Stubblefield with the pick.

The Chiefs got two seasons, and two playoff appearances, from Montana, before he retired. The Niners, in exchange, came out at least as well in the trade: they were able to put an end to the multi-year Montana-vs.-Young quarterback controversy, giving Young undisputed leadership of the team (and Young led them to a Super Bowl win the following season), as well as an excellent player in Stubblefield, who won the Defensive Rookie of the Year in 1993, and the Defensive Player of the Year in 1997, before leaving in free agency.

Not sure if this counts, but the New Orleans traded away their entire 1999 draft to Washington so they could take Texas star running back Ricky Williams.

Williams turned out to be a bust, but the Redskins (am I allowed to use that name? That was their name at the time) should have turned themselves into a Super Bowl-esque dynasty. It’s their own poor management fault they didn’t. That was a Herschel Walker-ish trade by the Redskins, who put themselves in prime position to succeed with the basket of picks in return but didn’t.

To be more accurate, Mike Ditka made that trade. To quote an old friend of mine, What a maroon!

Williams turned out to be a bust

To be fair, Williams wasn’t truly a bust (at least, not at the “bust level” of a Ryan Leaf or Tony Mandarich); in his three years with the Saints, he rushed for over 3000 yards and 16 touchdowns, and caught 132 passes – all very solid numbers, but he clearly didn’t produce at the level that Ditka had hoped he would when he made that trade.

After three seasons, Williams was traded to the Dolphins; he had a crazy-good season in 2002, then another very good season in 2003, before missing two full seasons, directly or indirectly related to his usage of marijuana and other prohibited drugs.

He ran for just over 10,000 yards in his career. Due to his drug use, interest in holistic medicine, and anxiety disorder (he sometimes did post-game interviews wearing his helmet, with tinted visor, to avoid eye contact), I think a lot of fans classified him as a flake. But, I don’t think it’s fair to classify him as a bust, unless the non-bust bar is “did he play well enough to justify a team trading away an entire year’s draft picks for him” – and I think that danged few players could do so.

Davis pretty much provided negative value for the rest of his abbreviated career. While they didn’t hit their peaks with Houston, Schilling had a borderline HOF career, Finley probably qualifies for “Hall of Very Good” with 2500 hits, 300 HRs, 300 steals, Harnish put together a handful of strong seasons as a starting pitcher and was a legit #1 for the Astros for awhile.

The Texas Rangers have been involved in a couple of these types of trades, on both ends of the spectrum.

In 1982, the Rangers traded with the Mets to acquire Lee Mazzilli. In exchange, they gave up Ron Darling and Walt Terrell, both still in the minors at that time. The trade was worth it for the Mets for Darling alone, as he went on to become a key pitcher for them for the rest of the 80s and a prime member of their '86 World Series team. Terrell had a halfway decent run as well, though he left the Mets after only 3 years. Mazzilli only played in 58 games for the Rangers before they traded him to the Yankees for Bucky Dent.

Conversely, in 2007 the Rangers pulled off probably the best trade in franchise history by moving Mark Teixeira to the Braves for Elvis Andrus, Jarrod Saltalamacchia, Matt Harrison and Neftali Feliz (there were a couple others in the trade but they aren’t as important). The trade was a great one for the Rangers for Andrus alone; he became their starting shortstop for the next decade. Saltalamacchia was an okay catcher for a couple of years; Feliz had a couple of great years as the closer and Harrison contributed as a starter as well.

Teixeira wasn’t due to hit free agency until the end of the 2008 season, but the Rangers had seen the writing on the wall that he wasn’t going to re-sign with them; the Braves traded for him thinking they could sign him and got a rude awakening pretty quickly. They wound up moving him during 2008 to the Angels for a couple of journeymen.

In 2010, the Royals traded Zack Greinke and Y. Betancourt for Alcides Escobar, Lorenzo Cain, Jake Odorizzi and Jeremy Jeffress. Cain and Escobar were crucial components to the Royals 2014 WS appearance and 2015 WS victory, and Odorizzi was a trade piece that helped acquire James Shields and Wade Davis.

A few years later the San Diego Padres traded James Shields to the White Sox for Fernando Tatis Jr. in 2016.

The next year, the White Sox traded Jose Quintana (a very solid pitcher at the time) to the Cubs for prospects Eloy Jimenez and Dylan Cease.