Female werewolf movies of the 1950's?

Only one I can think of is The Daughter of Dr. Jekyll, but it may not be what you want because

she’s not actually a werewolf

Your best bet is Frankenstein’s Daughter. It’s not perfect, because while Trudy does turn into a monster at night, she’s not specifically a werewolf. Also, that plot seems to disappear when the mad scientist kills his date, Suzie, and steals her brain for his creation, leaving Trudy on the sidelines, mostly to scream. 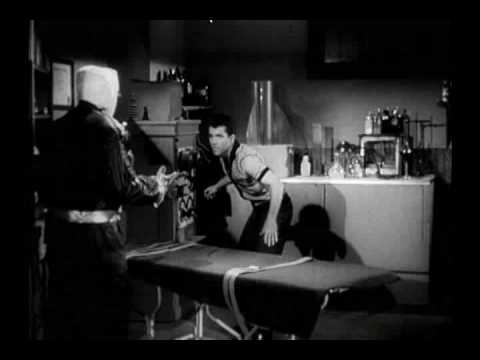 Somehow I doubt it. Turning into a monster a few days a month…it was the 50’s, after all.

If you go back to 1946, you have June Lockhart as She-Wolf of London, but I’ve a feeling she doesn’t really turn into a wolf; it sounds like one of those pictures.

Poking around online a bit, I can only find two English-language werewolf movies of any description from the 1950s, The Werewolf (1956) and I Was a Teenage Werewolf (1957). It’s hard for me to believe that out of all of the creature features of the 1950s, only two were about werewolves, but I can’t find any others. Even the legendary Hammer Studios only ever made one werewolf movie, The Curse of the Werewolf (1961). For whatever reason, werewolves apparently just didn’t catch the imagination of horror movie makers or audiences in the 1950s.

The closest thing may be the 1957 film Blood of Dracula, starring Sandra Harrison. Now, as the title suggests, it’s technically a vampire film. But she’s not what we typically think of as a vampire. That is, she’s not a living dead creature who rises from her coffin to seek blood. Rather, she is an ordinary teenage girl who, through hypnosis and an amulet from the Carpathian Mountains, transforms into a vampiric creature. She resumes her normal human form during the day. The transformation involves her growing a lot more hair, much bushier eyebrows, pointed ears, and huge fangs.

If you consider the essence of the werewolf story to be an innocent person transforming against their will into a ravenous monster, Blood of Dracula fits the bill. Indeed, many people have observed that the story is basically a remake of the earlier I Was a Teenage Werewolf, but with a female protagonist.

Here is a YouTube compilation of the “vampire” scenes. You tell me if she acts more like a vampire or a werewolf: 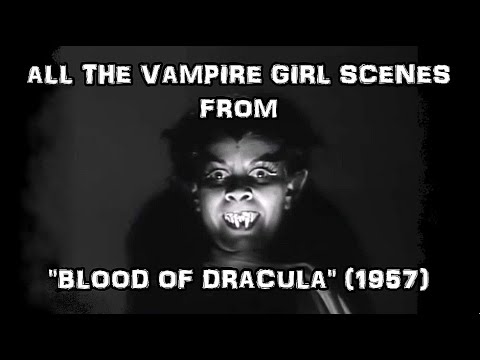 Oh, no! I’m having nightmares forever!

If you go back to 1946, you have June Lockhart as She-Wolf of London , but I’ve a feeling she doesn’t really turn into a wolf; it sounds like one of those pictures.

This is what I came in to post about. I never saw the movie when I was growing up, but it came as part of the “Universal Legacy Collection” with the “Wolfman” package.

What’s interesting is that, as you state, June Lockhart – Timmy’s Mom from Lassie! Dr. Maureen Robinson from Lost in Space! Dr. Craig from Petticoat Junction! How tragic that she came down with Lycanthropy! – wasn’t really a werewolf. She just thought she was, framed by her aunt. I suspect it was the absence of any real monster that doomed this film from constant rotation in the syndicated-to-television “Shock!” package.
But that’s not all that different from what was supposed to be the story in the original 1940 film The Wolfman. As Curt Siodmak originally wrote the script, Lawrence Talbot never changed into a hybrid man-wolf creature, but simply believed that he was thus changing. Pay attention to the script – they frequently say things like “I think a man can believe that he’s a wolf”, strongly implying that it’s all in his mind. The only time you were supposed to see the Wolf-Man was when, the last time Talbot’s being chased, he sees his reflection in a pool of water and sees the half-man, half-wolf figure. But it’s kept ambiguous – is he seeing that he’s really changed into a wolfman? Or is it all in his mind?

But the powers-that-be decided that, no, he really does change into a monster, and it should be shown on-screen. None of this wishy-washy ambiguity. That was almost certainly the right decision. People came back to see Lon Chaney, Jr. turn into the Wolfman, often directly on camera, in four more movies. They wouldn’t have gone back to see a man who was only deluded and thought himself a monster.

The earliest movie I can recall with a female werewolf, by the way, is the 1974 film The Beast must Die. They became more common after that, especially after The Howling (1981) and its many sequels.

Female Werewolves seemed to start showing up in fantasy literature after that, with Tanith Lee’s Wolfland (1983) and Suzy McKee Charnas’ Boobs (1989)

For whatever reason, werewolves apparently just didn’t catch the imagination of horror movie makers or audiences in the 1950s.

Gluing a mustache onto someone is different than gluing a full set of fur onto every inch of your skin. When you have facial expressions, for example, different parts of your face will move in different directions and that would cause most glues to tear on the lines of striation or prevent the actors’ face from moving in a reasonable way.

I could imagine them trialing some makeup tests, determining that they looked horrible, and scrapping planned movies on that theme.

No idea if that’s what happened, but it would explain how it took a while for us to get proper werewolves on screen. (Though, by saying “proper”, I’d note that a werewolf should have a different bone structure than a human so you really don’t get a properly proper one until you start using puppets or CGI. I’d probably say that it didn’t really get done until 1981’s An American Werewolf in London.)

Though, by saying “proper”, I’d note that a werewolf should have a different bone structure than a human so you really don’t get a properly proper one until you start using puppets or CGI. I’d probably say that it didn’t really get done until 1981’s An American Werewolf in London.

That and The Howling, which came out at almost precisely the same time, and which also used elaborate mechanical effects to show transformation into a much more wolflike creature.

Interesting piece on this below. The magazine Cinefantastique covered a lot of this in depth when the films were about to be released.

The storied and lupine history of Rick Baker and Rob Bottin, and how they forever changed werewolf movies in 1981.

The Wolf Man was released in 1941. It kicked off a wave of werewolf movies - depending on what you consider a werewolf movie, there were one or two a year pretty steadily for most of the decade, culminating in Abbot and Costello Meet Frankenstein in 1948. Then there’s a werewolf lacuna until The Werewolf in 1957, and only one other “proper” werewolf movie in the entire decade, I Was A Teenage Werewolf, in 1957 (How to Make a Monster in 1958 re-used the make-up effects, but within the movie, the “werewolf” was an actor in makeup who was hypnotized - unusually meta for the 1950s). The next “proper” werewolf movie wasn’t until 1961, with Hammer Studio’s The Curse of the Werewolf - the only werewolf movie they ever made.

All of that is to say, I’m a bit dubious that the werewolf makeup that was good enough throughout the 1940s somehow got worse, or failed 1950s creature feature screen tests, which were not exactly rigorous. I suppose it’s possible that changes in cameras, film, or cinematography techniques after 1948 meant that the 1940s make-up and creature effects were no longer passable, even for schlocky productions.

I think it’s more likely that The Wolf Man was a bit of an unexpected success, Universal and other studios capitalized on that success and ran the werewolf trope into the ground, culminating with the self-parody of Abbott and Costello Meet Frankenstein, and after that, werewolves just weren’t interesting or frightening for a generation or so.

All of that is to say, I’m a bit dubious that the werewolf makeup that was good enough throughout the 1940s somehow got worse, or failed 1950s creature feature screen tests, which were not exactly rigorous.

Yeah, so it seems…

I believe the 50s were still mostly in black and white so it also wouldn’t be an issue with the makeup in color. I guess strike that hypothesis.

Genre movies in the 50s were pretty dominated by science fiction. Even the monster movies generally had a science fiction connection. This was the era of the giant radioactive monsters, the big bugs, the creatures from outer space, the killer robots. There was a feeling, I think, that the more traditional “supernatural” monsters like werewolves and vampires were a bit passé and old-fashioned. Even the two legit werewolf movies mentioned above, The Werewolf (1956) and I Was a Teenage Werewolf (1957), are science fictional werewolves. Both of them are transformed by chemical serums, not by things like the full moon or ancient curses or anything.

I think the relative lack of 50s werewolf movies is just because they felt old-fashioned and not as contemporary as all those space monsters and giant insects.

The female version of the male dominated wolf man franchise in the 40s was cat people.

Just speculating, but Universal was a fairly major studio in the 40s, whose pictures made tons of money. The Werewolf and AIP’s I Was a Teenage Werewolf were true cheapo studios.

Phil Hardy’s Encyclopedia of SF Films says The Werewolf marked the turn from sf to horror films. That may be why they didn’t appear before 1956; the market was elsewhere.

Why they didn’t follow IWATW, which made a ton of money, is harder to answer. But as MrAtoZ said, Bride of Dracula did copy the theme and other monster movies focused on the “teen” part.

It may be something as simple that wolfpeople were considered too expensive to bother with when other monsters were easier to fake.

In the wolfman movies with Lon Cheney Jr, he’s always angsty and guilt ridden for all his wolfy doings. If he would have got a heavy iron cage, he could have charged admission to see his transformation, and he could have given the money to his victims.

Phil Hardy’s Encyclopedia of SF Films says The Werewolf marked the turn from sf to horror films. That may be why they didn’t appear before 1956; the market was elsewhere.

Even so, as I mentioned above, The Werewolf is still a science fiction movie. The transformation is caused by an “irradiated wolf serum” (whatever that might be). Even in making what was obviously a horror movie, they hedged their bets by giving it an SF spin. The next year would see the release of The Vampire, which also offered a “scientific” explanation for a traditional supernatural monster.

Meanwhile Hammer released The Curse of Frankenstein–still science fiction, but also very much a return to the tradition of the Gothic horror film. It wasn’t until 1958 that Hammer would give us (Horror of) Dracula, a full-on supernatural horror movie with no “scientific” rationalization. Bill Warren made the point in his seminal book on 50s SF, Keep Watching the Skies, that it took awhile for moviemakers to get out of the science fiction mindset and re-embrace straight-up horror. As you say, “the market was elsewhere.”