Okay, I love movies and I’m also a church geek. In fact, way back in college I majored in film and minored in religious studies. So this movie should pretty much be in the sweet spot.

On top of that, this film is currently at 98% on Rotten Tomatoes. I’m usually right in line with the critical consensus on most films, so I figured this was a can’t-miss film and I was eagerly anticipating it. Finally saw it on Sunday and the only thing I can come up with is that I am being punked. I hated almost everything about this movie. I get that it was about spiritual despair (and hope I guess?) but by the end of the movie I found myself envious of the character who committed suicide in Act 1.

Obviously, clearly, I am missing something that is causing critics to label it one of the best movies of the year so far; a tour de force by Ethan Hawke and director Paul Schrader. But I hated Rev. Toller more and more with each scene. The “Magical Mystery Tour” scene with Mary was cringe-inducing. And to hear an ordained pastor quote from “Revelations” (that’s not the name of the book) – was sloppy as hell.

My friend said it seemed like this was a movie written by someone who had heard about churches and imagined them to be like this; or that the script had been translated through five or six languages and then back into English so it was no longer comprehensible.

The ending was abrupt and jarring, forgetting even the fact that Chekov’s bomb vest gets put aside. The only thing that makes sense is if the whole thing was a fever dream in Rev. Toller’s diseased brain.

Has anyone else seen this and is willing to shed some light on why it is so acclaimed by the critics that I usually agree with?

I agree with just about all of your criticisms (I also was baffled by the “Magical Mystery Tour” scene, and caught the “Revelation[s]” error). That said, I felt almost mesmerized in watching it, wanting to see what came next, and think Ethan Hawke has never been better. It was a compelling drama of faith, despair, hope and love.

Here’s a long interview with director Paul Schrader walking through various stylistic and thematic aspects of the film: 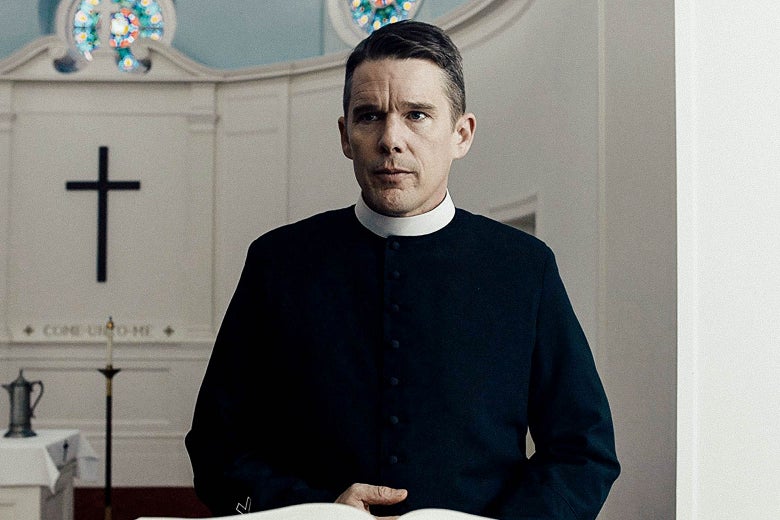 “This one is designed to be ambiguous.”

I admired the acting across the board, especially by Ethan Hawke. His portrayal of a suicidal man gradually destroying himself was hard to watch, but very well done. Plot-wise, I was gripped to the end trying to figure out what Toller was going to do with the suicide vest and why? Unfortunately, it was never really explained to any satisfying degree. So his plan was to blow up his own church full of innocent bystanders in order to assassinate the CEO/owner of an egregiously polluting corporation? Huh?

Regarding the ending, I interpreted it to mean that Toller drank the Drano, and in his dying moments, had a fantasy/vision of a blissful experience with Mary as his life ebbed away. Fade to black = death. Although I can’t figure out why he wrapped himself in barbed wire before doing the deed.