It never occurred to me that a seal could get trapped on the ice and starve. I had assumed they had ways to make a hole in the ice. How have they survived if they can’t?

This fisherman knew the seal had been stuck on the ice for days. Probably starving. So the guy makes a hole in the ice. I love the way the seal sits their patiently watching. Like it knows exactly whats being done and why. The seal knows this was done on porpoise.

But what happens when the hole freezes over? Don’t seals have to come up for air?

I’m puzzled by the evolution of this mammal and how they survive when humans aren’t there to help. I guess they normally avoid water thats fully frozen over? 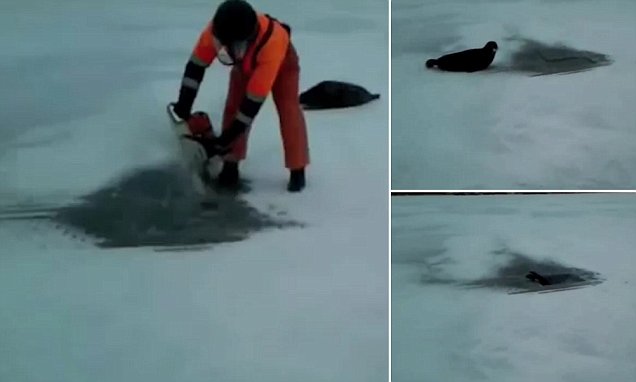 Tarmo Tolvanen made the decision to try and rescue the Saimaa ringed seal after discovering it on the icy surface of Lake Saimaa in Finland. There are only around 300 of the seals left in the world.

This is the touching moment a fisherman used a chainsaw to cut through a frozen lake in a bid to save a distressed seal which was waiting patiently nearby.

Tarmo Tolvanen made the decision to try and rescue the animal after discovering it on the icy surface of Lake Saimaa in Finland.

The Saimaa ringed seal, which is the world’s most endangered seal, had been stuck on the bank of the lake for days and appeared to quickly realise what the fisherman was doing. .

This is great. It seems like something that would happen on the cartoon Go Diego Go.

I know that seals can keep ice holes open by chewing and clawing away at the ice, but I’m sure that sometimes they just get frozen out or in. Hopefully this one can keep the new hole open.

Usually when an animal can’t get at water or food or shelter it just dies. But there’s also usually a lot of the same animal with better luck/health/skills to keep the population going. Not the situation here where the species is endangered due to human activities.