I’ve noticed that news organisations (especially websites) always seem to put up pictures of politicians in the most ridiculous poses.

So, feel free to share pictures of politicians in stupid poses. 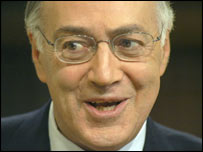 Public figures need to be careful not to offend photographers. In his book Rhubarb, writer H. Allen Smith, an ex newspaperman, had a scene where Thadeus Banner, the rich guy who owned the cat Rhubarb, insulted a photographer who thereupon, “Vowed to get a picture of him picking his nose.”

You mean this one?

You mean this one?

:eek: Great Og, that’s obscene! I had to close the window because all my ACK! synapses started firing at once. ACK ACK ACK ACK ACK!!

In that vein, I submit a picture of [ul=http://jokezine.com/pictures/kiss.jpg]Al Gore snogging the missus.

THe thing I find amusing is the captions: almost without exception, they always say so-and-so “gestures” or “reacts” during such-and-such.