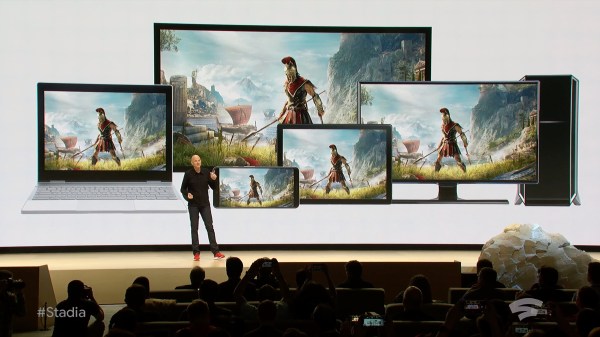 Onstage at GDC, Google CEO Sundar Pichai announced the company’s latest big initiative, taking on the entire gaming industry with a live-streaming service called Stadia that will be launching this year. The service will let gamers leave their hefty...

Will you get one?

It’s no accident that streaming gaming hasn’t caught on yet: gamers are very skeptical of it for latency reasons.

What latency feels like on Google’s Stadia cloud gaming platform

That’s a no-go for a lot of people.

I’m unwilling to accept any noticible latency in terms of interacting with my games. Now I realize that latency is an inherent thing when interacting with other players - but having the game processed locally means that the response to your controls and visual feedback to what you’re doing is always immediate. That’s an entirely different kind of thing than other players actually being a tenth of a second ahead of their actual position on your screen, which interpolation (and potentially client side hit detection) makes this essentially transparent to you. Having there be a noticible delay between your controls and the screen change is intolerable.

I bought a monitor with no processing hardware (no scaling/resizer/picture quality settings) because it shaved 8-12ms off the input lag of the unit. I find gaming on TVs that have noticible input lag (20ms+) due to screen processing to be really annoying. So “cloud gaming” is probably always going to be a no-go to me unless they develop a way to encode/decode video that doesn’t add more than a few milliseconds of latency and keep servers in basically every city to make it manageable.

It seems like every time a cloud gaming proposal comes up, people really want it to work. “Wouldn’t it be awesome if you could game without having to worry about your own hardware”… and my answer to that is no. Having a massively powerful processing unit in the same room with me giving me instantaneous gaming response is awesome, thanks.

Edit: On the other hand, I might be willing to deal with some limitations for mobile gaming specifically. Mobile gaming necessarily has power/weight/size limitations, so you can’t just build an arbitrarily big and power hungry machine. So I’d never accept cloud gaming to replace a PC, but I guess I might give it a try if it put better quality games on a tablet/phone.

So I needed a new Chromecast, and Google was offering a sale on the Founder’s Edition stadia set (because they didn’t get rid of enough of them at launch, presumably). For the price of a Chromecast Ultra, I got the ultra, the swank Google Stadia Controller, and a free membership to Stadia Pro for some number of months that I don’t remember.

I have to say… it’s a SHAME this didn’t catch on. It is incredible; I honestly can’t notice any difference between playing on this versus a console. The controls are crisp and responsive, the controller itself is really nice and feels good in my hands, and everything about it just seems to WORK. I don’t even understand HOW it works, but it sure does.

I still prefer PC for most of my gaming needs, but for console-type games, this is just excellent!

Well, you can always hope that Amazon’s Luna catches on.

Can’t say I am a fan of the idea, and I’m not sad it hasn’t caught on.

One of the issues that prevents the tech savvy from taking up Stadia is Google’s poor record of keeping projects that don’t do so well going - who is going to buy a game on Stadia (which is similar ownership to steam) if you can’t be sure it’s still going to be available in a few years time?

They do have a subscription model, but the Microsoft games pass seems to have stolen their thunder on that one.

Less so even, since you don’t have even the download available if Stadia dies. At least Steam doesn’t delete a downloaded game off a HD, and even owners of delisted games can still download them. (I have a couple that are delisted and Not for Sale games in my library that I think I can still download, not that I really desire too)

I did say it was similar - for the majority of Steam games, if Steam itself was to fold, access would be lost.