Googles Doctor Who game: the Whodle

Hope you do better than me. I can’t figure out how to do much except make the Doctor walk around. Shouldn’t his Sonic Screwdriver work?

Your goal as the Doctor is to retrieve all of the letters in “Google” and return them to your TARDIS, while avoiding the exterminating Dalek. Fall afoul of the evil Dalek and you regenerate into the next Doctor down the line. (John Hurt’s “War Doctor”, revealed after the Doodle’s production began, is not included.)

Earlier in the year, a Change.org petition demanding a Doodle to celebrate the Doctor’s 50th anniversary gained more than 4,300 petitions. Google won’t say whether that petition inspired its Doodle makers, but they managed to publish it with one day to spare.

Well I got the first two letters. Time for bed.

This article has screen shots of the Google game. 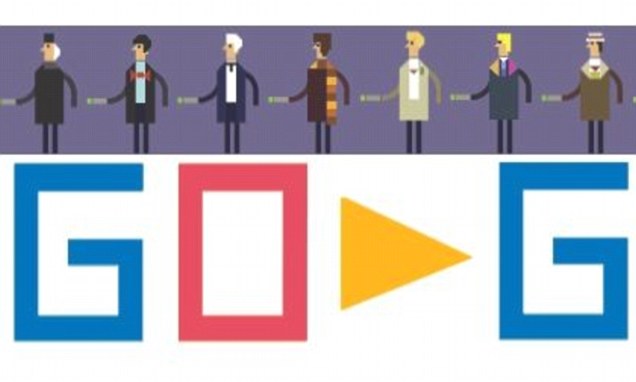 To celebrate the show's 50th birthday Saturday, the California-based firm has built the game in which users play as the Doctor to collect letters in the word Google.

I can’t figure out how to do much except make the Doctor walk around. Shouldn’t his Sonic Screwdriver work?

There’s a switch near the TARDIS. Operate that, and it starts a moving platform that will carry you to the lower level.

6:57 minutes in total with no Regenerated Dr. (third try)

The Daleks and Cyber men have regular movement patterns, you can stand on the square next to them and not be hurt. You can use the mouse to click on the destination square if you don’t want to use the keyboard and to hurry it up, but be careful, the Dr. will choose the shortest distance and run into danger unless you are sure the shortest distance is a safe one.

Watch out for a Weeping Angel in the cemetery and in the final screen you need to get 2 letters, the moving energy tiles also follow a linear pattern so there are many safe squares to stand on.

I got bored too fast to do more than two levels. Cute though!

Uuugghhh. I’m glad so many people are having so much fun with this. Video games like this make me want to curl up in a ball and scream.

How do you get over the bridge?

Oh, the Weeping Angel is hard!

I played this morning, then told my mother about it, and held her hand through most of the game.

I finally ended up finishing the last level for her-- she was getting frustrated, but was so close to the end.

I’ve beaten the Weeping Angel, but I couldn’t figure out how to gauge her movements like all the others. It’s just luck and losing a doctor or two. Any key?

I’ve finished with my 2nd attempt with my best time of 11:58 and 5 dead doctors.

And now I’ve watched both parents play the game on Dad’s Tablet.

For me, one time through was plenty.

Does anything interesting happen when you collect all the letters?

I got them all, but couldn’t get the L and E back to the TARDIS - after about 30 regenerations on that level alone (seriously), I gave up.

I have hated almost all these doodles. (The Les Paul one was bearable but not as good as it should been.) This one pushed me over the edge. It created a huge lag in typing in the search box so that I would mistype, hit the backspace too many times, etc.

Looked up what addresses to block, no more animations (I hope).

Google made their name in having a simple home page. No frills or anything. They are rapidly becoming not Google.

But for someone who never watched an episode of Doctor Who, and could burn trough ten bucks trying to beat Space Invaders, I think that’s not half bad!

4:53 with one life lost. Still trying to do better.

I have a mental block with the controls. The game is all diagonal and my arrow keys aren’t. It’s very non-intuitive (for me).

I have a mental block with the controls. The game is all diagonal and my arrow keys aren’t. It’s very non-intuitive (for me).

Agreed! I wanted to use the keyboard for this, but everything was at an angle, and my brain couldn’t adjust. So I used the mouse interface instead.

The angel was annoying. I gave up on timing it, and instead just clicked at the Tardis and let the system walk me there. It worked on the second attempt.

I was disappointed in the ending.

I hated the Weeping Angel. It seemed to be broken. It just would walk straight up to me, no matter where I moved. That would be fine if you weren’t at a bottleneck where the Angel could block your path completely. The only way to get through seemed to be to move as fast as possible.

And none of the rest of the game worked like that, and, once you actually get out of the angel’s way, it seems to just work in a pattern, just like every other enemy. So I think they screwed it up.