Have you ever moved for better weather?

Read an Atlantic article - which said 11% of Americans have moved specifically for a better climate or weather (and that one survey showed 56% Americans planned to move in 2021 - which seems high despite Covid).

Article states better weather does not increase your happiness much because you quickly get used to it so discount it. Plus one may miss the change in seasons.

Have you ever moved to a place just to enjoy nicer weather? Did it work in the short term? The long term? 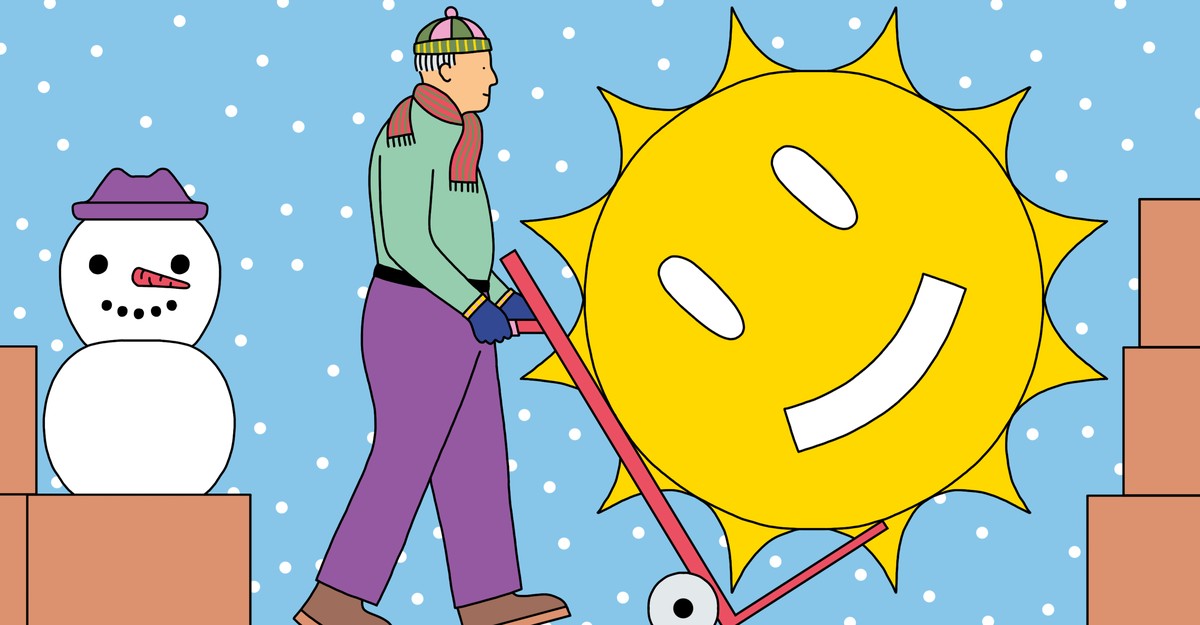 What Winter-Haters Get Wrong

Chasing the sun usually isn’t worth it. Learn to like the climate you’ve got instead.

Couldn’t possibly be more wrong, as far as I’m concerned. I spent my life in the northeast, mainly NYC, and I bought a place in Florida in 2013, have lived here fulltime since 2019, am not remotely “used to” warm, sunny winters and doubt very much that I will ever be. I moved for better weather, got it, and am deliriously happy.

Bear in mind that a considerable number of Americans who “move south for better weather” are retirees, who primarily wind up moving to Florida or Arizona (and, now, apparently, New Mexico) to avoid winters.

Florida is high on near-retirees' lists as a place to spend their golden years, yet New Mexico takes the top spot for retirement destinations, according to a study from United Van Lines. Here's what you should know before leaving your state for more...

Have you ever moved to a place just to enjoy nicer weather? Did it work in the short term? The long term?

Yes, yes, and yes! Moved away from Chicago during the blizzards of '79 and still glad I did.

Couldn’t possibly be more wrong, as far as I’m concerned. I spent my life in the northeast, mainly NYC, and I bought a place in Florida in 2013, have lived here fulltime since 2019, am not remotely “used to” warm, sunny winters and doubt very much that I will ever be. I moved for better weather, got it, and am deliriously happy.

Pretty much the same for me. I lived for many years in New England and find the cold and ice both physically distressing and - with respect to driving - dangerous. Now I live in Hawai’i and rarely a day goes by that I don’t revel in my good fortune. No longer are my hands so cold that they hurt. No longer are my nasal passages so dry that they ache. No longer is it a 10 minute production to put on/take off layers off outerwear to go in and out. No longer do I have to think about snow tires. And no longer must I limit my outdoor activity to a few months of warm weather. I can run, walk, and hike every day of the year.

I know some people love the cold - I have a friend who loves winter and loathes summer. I have no argument with such people; they’re obviously constitutionally different from me and there is no right or wrong, just preference. But I really, really, REALLY hate cold, not just when I’m out of doors, but inside as well, as the air is dry and never really warm enough.

ETA: I also spent many years practically on the equator, living in Micronesia and Indonesia. Those places are a bit too hot, but I’d take Jakarta over New Hampshire any day.

Grew up in Wisconsin and moved to Florida when I was 25. It was glorious. Nothing like driving around at 6pm in February when it’s dark out with all your windows down or having dinner sitting outside at night.
The alternative is down right depressing.
Situations changed and after getting married moved back up to Minnesota for better career opportunities and as far as I’m concerned a better place to raise kids.
We still vacation in Florida quite a bit and are constantly evaluating areas to move to when we retire.

Seems to me that first it’s necessary to define “better weather”; and that the definition’s going to be different for different people.

I spent a year wandering around the country partly to decide where I was going to settle down; and by the time I’d done that I was sure I belong in the Northeast (USA; I didn’t explore the entire planet). That was a lot of years ago and I’m still of the same opinion. I like having some warm weather but I also want some cold. I deal much better with too cold than with too hot. I also deal better with too humid than with too dry, though I like it better someplace in the middle.

I spent long enough in Florida to find out that I hate the weather there. So did my mother; she moved back to NY about as fast as she could after my father died (the move to Florida had been his idea.)

After separating from the military, I stayed in Oklahoma because my GI Bill went much further there for college. After 10 years, six tornadoes touched down in the Oklahoma City area one day causing massive destruction. A month later I hopped a plane back to the East Coast and have stayed here since. I’ll take blizzards, hurricanes and Nor’easters over twisters any day.

I’ve moved inside because it was raining out, does that count?

I am under some pressure to move to a “nicer climate” when we retire, so I guess it will happen eventually.

I did not move out of Indiana, but when we moved to Indianapolis from a city farther south (not enough to make a difference in climate), and were deciding on a house vs. an apartment, we had previously been in a house in the woods pretty far out in the county, where we had to deal with everything the weather threw at us.

We decided if we could not find an affordable house close to a neighborhood hub, we would get an apartment.

So, we didn’t move to change climates, but we did change our type of residence, and not dealing with the effects of weather was a big consideration. I shoveled snow and mowed the lawn for nearly 20 years. Now, for the last 10, I have not had to. Don’t miss it a lick. If I could negatively miss it, I would. Also do not miss being responsible for my own repairs.

No. Tucson does not have weather I like much of the year. Also I miss seasons. While I do not miss shoveling or driving on ice or in heavy snow, I miss winter. I miss those quiet snowy nights when you can walk outside and hear the flakes hitting your nylon covered coat. I miss fall. What we have here is not fall.

Yes, I moved from California to New England. Could not be happier. I do not understand the charm of Florida at all. Bonus: people don’t move here for the weather, they move away! Yay!

No. I’ve moved surprisingly little in my life, and always for education and job opportunity. By coincidence, my major long-term residences were progressively areas of less snow and less cold, now heightened by climate change. I’m retired now and have no intention of moving. We still have good old-fashioned Canadian winters on occasion, though, and I’m fine with that. I’d rather have familiarity, convenience, family, friends, sane politics, and a decent society than constant warm sunny weather. Besides, I’d very much miss the seasons, which all have their unique delights.

Old saying: There are two seasons in Florida - bug season and (insanely) hot season. I found out that you could add another - mold season.

I spent long enough in Florida to find out that I hate the weather there. So did my mother; she moved back to NY about as fast as she could after my father died

I live in Ohio. I’ve known a lot of people who moved to Florida for better weather. Many come back after a few years.

Old saying: There are two seasons in Florida - bug season and (insanely) hot season. I found out that you could add another - mold season.

A relative related a story about his (now retired) coworker that occurred a few years ago. They live in Ohio and have a winter home in Florida. When they drove down to their house in late October, they discovered the air conditioning system was not working. Unbeknownst to them, it had not been working all summer. The entire house was full of mold. The house was gutted and all the drywall had to be replaced.

I haven’t moved for better weather, but I’ve screened potential new jobs by climate. I live in the Northeast, which i like. I’ve visited the southeast (way to hot and humid) the southwest (too hot and dry) the Midwest (more extreme than i like, but I’d live there) the west coast (nice weather, although i might miss winter. And i worry a bit about earthquakes and drought) and Hawaii (stunning weather, but not a lot of employment opportunity in my field, and far from family and friends).

I think it makes sense to move for better weather, but i think there are a variety of opinions as to what weather is better.

All the moves in my life have been work-related, not weather. And now that we’re retired, we’re staying put. Having lived in Florida for close to 2 decades, we have no desire to go there. Brief sojourns in desert country convinced us that we hate it there, too. Frankly, of all the places we’ve lived, this is absolutely our favorite, and weather is only one factor. No more moves. This is it.

Over twenty years ago I moved away from Regina, SK, where the average January temperature is −20 °C and where it frequently drops to −30 or even −40 °C with windchill. I wouldn’t say that weather is the only reason I moved, but it was certainly a factor.

It was one of the main reasons we left Seattle. I lived there for two years as a contract engineer, and had a firm offer from Boeing for a permanent gig. I’ll admit there were other reasons, but we were desperate to leave the gloomy, miserable climate.

We moved to Arizona and spent two years there drying out and frankly, recovering mentally. Eventually we decided AZ was too much of the other extreme and returned to Texas where lakes don’t need regular mowing. We’ve been here 30 years now. The climate’s far from perfect, but you can play outside most of the year, and it was the best mix of cost-of-living, pay, weather, lakes/beach and distance* from relatives.

*Seattle was the best for distance reasons, as we were thousands of miles from the nearest relative, but Texas was far enough to keep visits to a minimum.