How Can a Jet Engine Fly in the Rain?

We take it for granted. Rain is no big deal. Birds and cicadas are another story. But, I know wet steam in a steam turbine can spell death to the turbine. The droplets of moisture can pass like bullets through the turbine blades. So, shouldn’t rain be just as deadly to a jet engine’s gas turbine? What is/are the difference(s)? …and why can’t steam turbines be made the same?

I do not know the answer but I would suggest a part of it is that modern jet engines are very high bypass. Most of the water entering the engine does not go through the engine. It bypasses that part.

This video helps explain it: 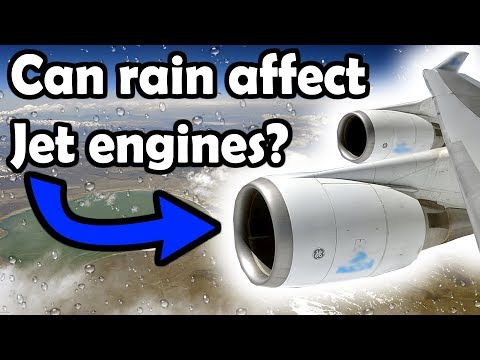 This article says that flameouts due to intake of rain in a jet engine are very rare, but not unheard of, but that, in general, the design of a turbofan engine, the high temperature in the engine’s combustion chamber, and the relatively low percentage of water in the air that’s being drawn in by the engine, are all factors in the engine’s favor.

This effect is negligible under most conditions since the percentage of water present in the large volume of air entering an engine is still relatively small in most storms. The high temperature in the engine’s combustion chamber quickly evaporates this level of water into steam that has little influence on the engine’s power output. Air also passes through the engine quite quickly since a typical engine on a commercial airliner cycles through a volume of air comparable to that in an average house each second.

Many turbofan engines also take advantage of their bypass air system to remove precipitation from the airflow before it reaches the combustion section. As the incoming air moves into the rotating fan blades, the spinning motion flings the heavier water outward like a centrifuge. The water is then blown through the bypass air ducts that surround the engine core. In this way, the water is carried through the engine without ever entering the combustion chamber. This design allows a turbofan engine to remove the majority of water that it will ever ingest while flying through a storm. Whatever small amount of water remains in the air passing through the core will be evaporated and can easily be handled by the engine.

The droplets of moisture can pass like bullets through the turbine blades. So, shouldn’t rain be just as deadly to a jet engine’s gas turbine?

No. Because the rain is not going to the gas turbine. The air that comes in to the airplane engine, first sees the fan, then the air compressor, then the combustor where it is burnt with fuel and then finally the gas turbine.

See this picture for illustration 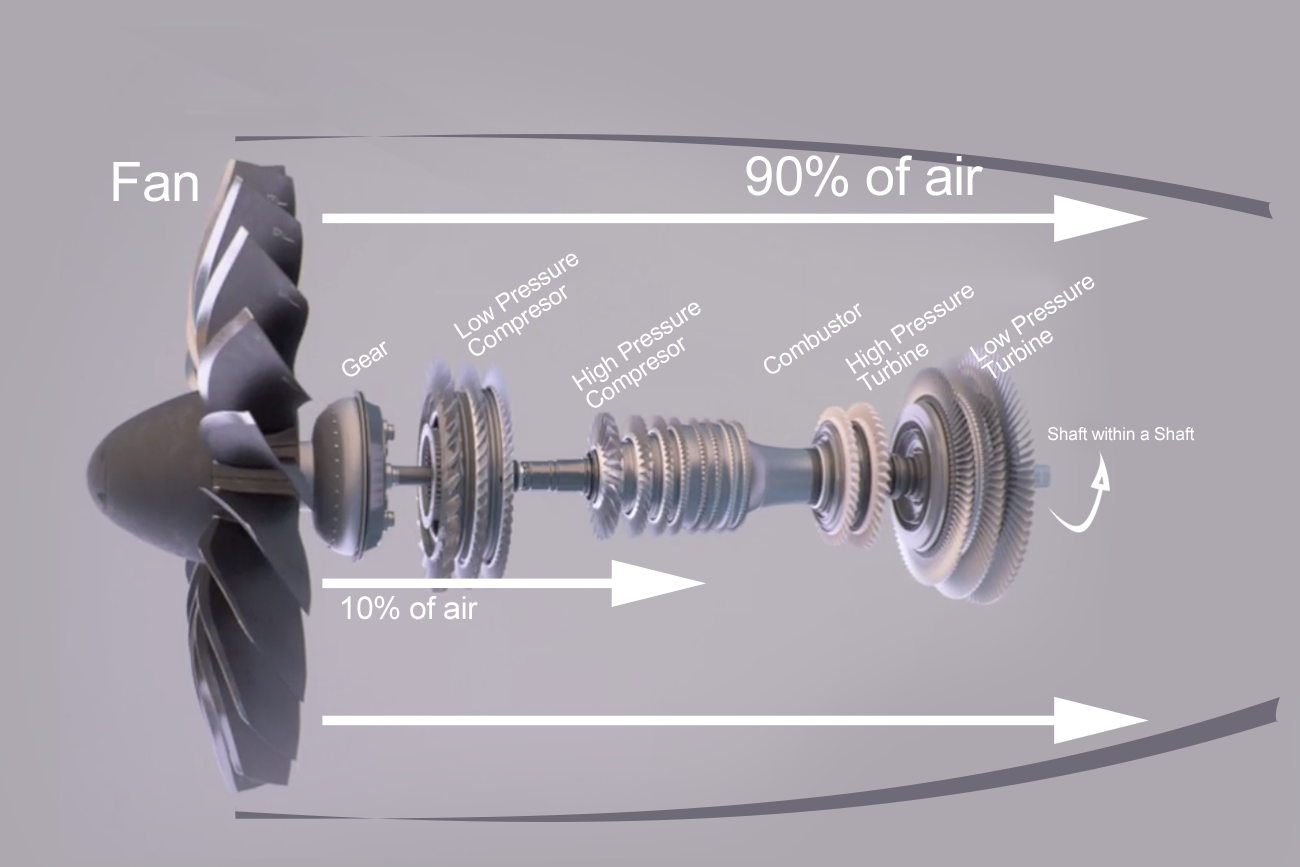 We do have gas turbines in petroleum plants that get damaged by vanadium in heavy fuel oil. Damage is sort of same as in a steam turbine.

There are turbo expanders (Basically the gas turbine part ) - where a high pressure gas is expanded to lower pressure - similar to a steam turbine, and it has the same concerns with water droplets.

There are airplanes, such as the KC-135, that actually sometimes inject water into the engine to increase the thrust.

I am curious…do you know how very early, low (or no) bypass jet engines coped with this? (think 1950s)

Short answer is even pure turbojets didn’t / don’t have a problem with ordinary rain. But can be drowned by the truly insane rain rates in fully developed thunderstorms. What’s different now versus say the early WWII jets is how much they can handle without hiccupping.

In ordinary rain, even pretty intense rain, the amount of water in the airflow just isn’t that big versus the volume of air. It gets processed by the compressor, heated to steam in the combustor and flowed out past the turbine as just one more constituent of the very hot exhaust gasses. Snow gets the same treatment.

In normal flight the ignition system is off; the fire is fully self-sustaining as fresh fuel and air is continually injected into the existing conflagration. The details vary by engine type but as a general rule ignition is turned on in heavy rain either automatically or by pilot action. Which ignition is a more or less continuous spark a la a car engine, but much larger and higher powered. The point is not that it’s necessary, but that if the fire gets quenched by an especially thick blast of water, it’ll be relit within milliseconds.


Airport fire/rescue folks know that they can usually shut down engines in a pinch by directing a serious firehose/monitor into the center of the engine intake. Center because of the large bypass ducting of modern turbofans mentioned above. Any water hitting the perimeter of the intake and fan face will simply go around the engine proper and be spit out astern.

Which tactic might be useful if the cockpit crew was incapacitated or somehow they’d lost control over the engine(s) due to fire or other battle damage. Said another way, there is some volume of water that can’t be successfully processed and keep the fire lit. But it’s on the order of a really big fire hose against an engine at a rather low power setting. So well outside what prudent piloting should encounter in the air.


As mentioned, some early jet engines used water injection to augment thrust. The extra water cools the inlet air and adds mass flow to the output. Both of which are good for thrust.

Unlike a piston engine, the engine’s “compression ratio” is at least partly related to RPM. An engine run at higher RPM will have a higher compression ratio and all else equal, will burn a hotter fire. In many engines, the real limit on power output is not centrifugal forces due to RPM; it’s instead the temperature the combustion section exhaust system and turbine can withstand. Dumping water into the fire cools the exhaust which means you can then crank up the RPM more and get more compression and a hotter more robust fire without melting the output side of the engine. It seems paradoxical to dump water on a fire to make it hotter, but that’s the net effect.

The QF 32 accident was a good example of how resilient to water a modern high bypass engine is.
The accident severed control of the outboard engine, so there was no way to shut it down. It took three hours of effort to get it to stop, pumping water and finally firefighting foam into the intake. 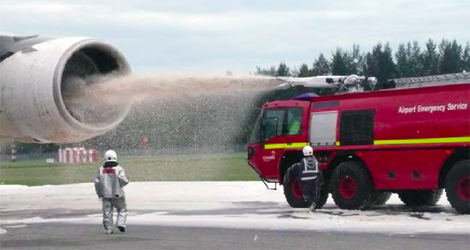 How do hurricane airplanes fly? Ignoring the wind question, couldn’t the rain be a problem in that scenario?

I am curious…do you know how very early, low (or no) bypass jet engines coped with this? (think 1950s)

I think LSLGuy covered it very well up there. You need a compressor to run the gas turbine,
And air will go to the compressor first before going to the turbine.

Also jet engines / gas turbines are “ washed” with water - even during operating conditions. However, it’s a fine mist that is used for this cleaning (not big drops of water like in rain).

Good cite on engine washing. Here’s some Google pix of similar systems being set up and used. Not a big volume of water, but once it’s someways into the engine where compressive heating has occurred, the water serves to steam-clean any gunk off the rotor and stator blades.

There are airplanes, such as the KC-135, that actually sometimes inject water into the engine to increase the thrust.

The F-105 injected water into its afterburner.

Thanks, all, for sharing. I have learned quote a lot!

…and why can’t steam turbines be made the same?

The usual answer to such ‘why’ questions is “it costs too much”.

Electrical generator turbines are way bigger, and way more powerful than jet engines. So I’d expect that building them to handle this would be way more expensive.
Especially when the industry seems to have developed effective ways of preventing water droplets getting into their turbines.

At this point in time, there are only three kinds of hurricane hunter aircraft in operation in the world, all in the US.

NOAA’s National Hurricane Center operates a Gulfstream IV with long range instrumentation which flies over hurricanes well above their cloud tops, so rain is no issue. They also operate WP-3 Orion aircraft for storm penetration (which is what you’re thinking of). This is a four-turboprop aircraft. A turboprop is like the ultimate high-bypass turbofan engine: the turbine (jet) engine is comparatively tiny but drives a propeller. Almost all the propulsion system surface facing precipitation is propeller. A high-bypass turbofan has a bypass ratio of up to 50-60 (and most are in the 10-15 range), whereas a turboprop has an effective bypass ratio of 50-100. If high bypass works to defend a turbojet from precipitation intake, a turboprop has much more of it.

The US Air Force (Reserve) operates WC-130J aircraft which, like the WP-3 Orions operated by NOAA, are turboprops. Same explanation.

I can’t decide whether I want to ride in one of those planes, or if I’d die of fear. Both. I’ll take both.

Just last weekend, I was thinking about water in a jetliner’s engine while reading this excellent summary of a truly heartbreaking accident, Saudia 163 by /u/Admiral_Cloudberg .

Fire fighter crews not being able to kill the engines plays role.

301 people lost their lives as a Lockheed L-1011 Tristar made an emergency landing due to an in-flight fire, then mysteriously went silent before anyone left the aircraft. The horrifying disaster boggles the mind: somehow, no one on board the jumbo jet survived a flight that never even crashed.

Seems odd that they couldn’t turn off fuel to the engine somehow. I understand that control was severed but I suppose I would have thought there would be maintenance access somewhere to a manual valve on the fuel line. Anyway, I guess not.

Probably is all manner of close in access to controls and mechanisms stop it. Whether anybody felt safe working that close to an engine running at full tilt is another matter. Eventually it would have run out of fuel. They didn’t let the passengers off until it was stopped on the basis that they were safer inside away from the engine. Given the running engine’s twin had let go only a few hours earlier and this one was clearly a lot more stressed by now caution was probably deserved. As it was it all ended ok.

That’s pretty much it.

There are typically two fuel shutoff valves, each operated by separate electrical circuitry. And typically with some sort of mechanical handle or at least a place to attach a wrench or socket drive to turn the valve without power.

One is directly upstream of the fuel injection computer, so mounted someplace on the side or underside of the engine core aft of the fan. Getting access to that on a running engine would be a fraught task, perhaps impossible without being sucked in.

The other, the so-called “spar valve”, is located in the wing near where the engine pylon joins the wing. That valve is there for two reasons: If the engine breaks off the airplane in flight, taking (most of) the pylon with it, this valve should be upstream of the fuel line break and provide a way to stop the hemorrhage of fuel out the broken line. The second reason is that a fire in/around the engine proper may destroy control of the engine-mounted valve. The spar valve should be far enough away from the fire for its control and power wiring to survive long enough to be used to stop the fuel flow into the fire and overboard.

Getting a workstand and a worker up there at the wing/pylon interface would also be tough on a running engine.