How did Rather interview Saddam?

Iraqi President Saddam Hussein had an interview with CBS News Anchor Dan Rather. You would think that if Rather can find him, why can’t we?

But this question is more along lines of how did they do that interview, was Rather really in the same room as Saddam? 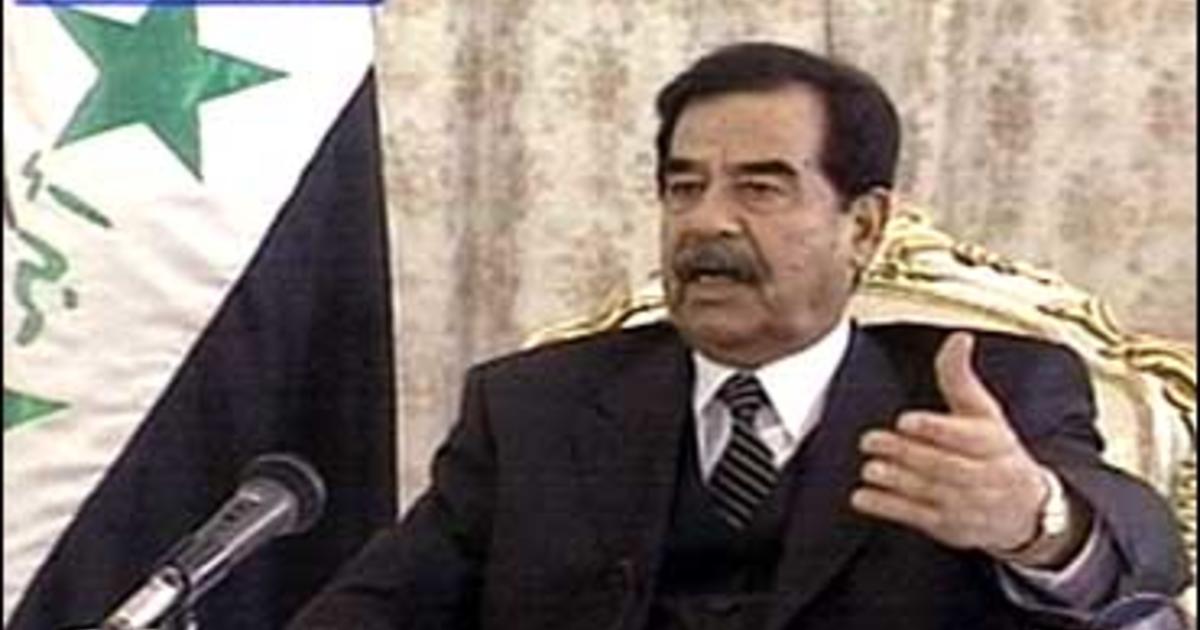 Tells CBS News The American People Are Not Iraq's Enemy

Uh… I don’t think we have any problems knowing where Saddam is… is where his bombs are that Bush is concerned about.

Osama is the one that’s actually being hunted down. Saddam is not hiding himself, and since the war hasn’t started, Bush isn’t actively trying to kill him.

I’ve heard that Saddam’s inner staff, before meeting with him, are usually blindfolded, searched and driven around for a while before being taken to his location (and probably something similar when they leave), to discourage a coup.

If that’s true, I image that Rather probably had to go through something similar to get to meet with Hussien.

Rather described the process between chunks of the interview broadcast, and it was pretty much as HPL says.

With a microphone and television camera, of course!

Or, a much simpler M.O.: Dan Rather and crew were told to wait at a certain palace for Hussein to arrive.

Then again was it the ‘real’ Hussein? Maybe a body double?

Once again, I watched the interview and see no reason to disbelieve Rather’s description: they were picked up at their hotel by Saddam’s men (unexpectedly; no prearranged time, or even aadvance permission granted to do the interview at all). They were put into a car with curtained windows, then driven around in circles for an hour, then moved to another car and driven around in circles, and finally they ended up at the palace.

If the guy who did the interview was a body double, then he was a very convincing one.

Wonder what the smallest possible size for a GPS unit is and if Rather would have been willing to have one on his person?

Saddam Hussein has a lot of enemies, and according to some sources, at least, goes to remarkable lengths to hide himself at all times, impending war or not. I heard an interview on the radio with the author of a book about Hussein, which I can’t find a link to now. There was a story in the Atlantic Monthly about Hussein that touched on similar themes, though.

The author on the radio claimed, among other things, that Hussein keeps a staff of impersonators to make many of his public appearances and to distract and confuse anyone looking for him. All of his palaces make preparations for his arrival and dinner every evening, so that it’s impossible to tell where he will choose to stay. Supposedly, he often travels secretly and alone while an elaborate motorcade guards one of his doubles, to create a distraction.

Saddam’s real fear has always been betrayal from within his own country or government, and he acts like it.

“Note: The interview was taped by Iraqi TV crews, as is standard practice for Hussein, and the Iraqis delivered a tape that combined all three cameras into one composite feed. However, as far as we can determine, the content of the interview is intact. The Iraqis assured us beforehand that there would be no censorship whatsoever of the interview, which ran for almost three hours…”

Tells CBS News The American People Are Not Iraq's Enemy

I sure wouldn’t want to be the interpreter for him. I hope his interpreter is alive still