How do I stop critter from chewing wires in my truck?

For the 3rd time, we’ve got a vehicle in the shop awaiting a new cable assembly because some critter (maybe mice?) had a little nosh under the hood. These 3 times have been over the course of 17 years, so it’s not like a monthly occurrence, but it’s still expensive. I’ve seen different products advertised, so I thought I’d ask here if anyone has had success with any of these products - some spray, some ultrasonic…

The truck lives outside and is mainly used to take trash and recycling maybe every other week - would driving it more often stop the chewing? Or are other measures required. Our cars are in the garage so indoor parking isn’t going to happen. Can anyone help me??

The are some granule stuff that is pepper base that you sprinkle in a full circle around the truck that does a fairly good job at keep off rodents, even as large as groundhogs. Though this stuff needs to be reapplied often. Every few weeks or after heavy rains. I used it vs. groundhogs and it surprisingly worked fairly well. Though not 100%.

I got it at the local hardware store, I wish I could remember the brand name. I’ll look and report back.

I can’t find the brand that worked for me, but as an example, search Amazon or Lowes for “rodent repellent for car engines”.

Find one that uses pepper as a major ingredient and it has a good chance of working.

Never tried this on auto’s I use steel wool where there are openings. Is there a way you protect the harness by wrapping with steel wool? Try putting in a Ziploc to keep dry then wrapping.

Our home exterminator recommended steel wool to keep out rodents. They’ll chew through lots of things—wood, drywall—but they don’t like steel wool, so he said plug any and all holes in the foundation etc. with it.

Years ago I tried ultrasonic and it seemed to keep the roaches away. We got one that flashes lights and beeps at random intervals for rats (they run along atop our fence) and they’re not the least bit impressed.

I’ve got squirrels that do the same thing to my truck, even inside the garage. They’ve only chewed through the wires once in 15 years, though. At my last oil change the guys also told me the air filter box was full of walnuts. (I have a ton of black walnut trees in the yard.)

I even did a modification of the inlet to the cabin air, because of the number of times that filter had been filled with walnuts and other nest-type things.

You could try suing the manufacturer. Apparently this problem has gotten much worse since the manufacturers started using soy-based wiring, which the rodents seem to love. 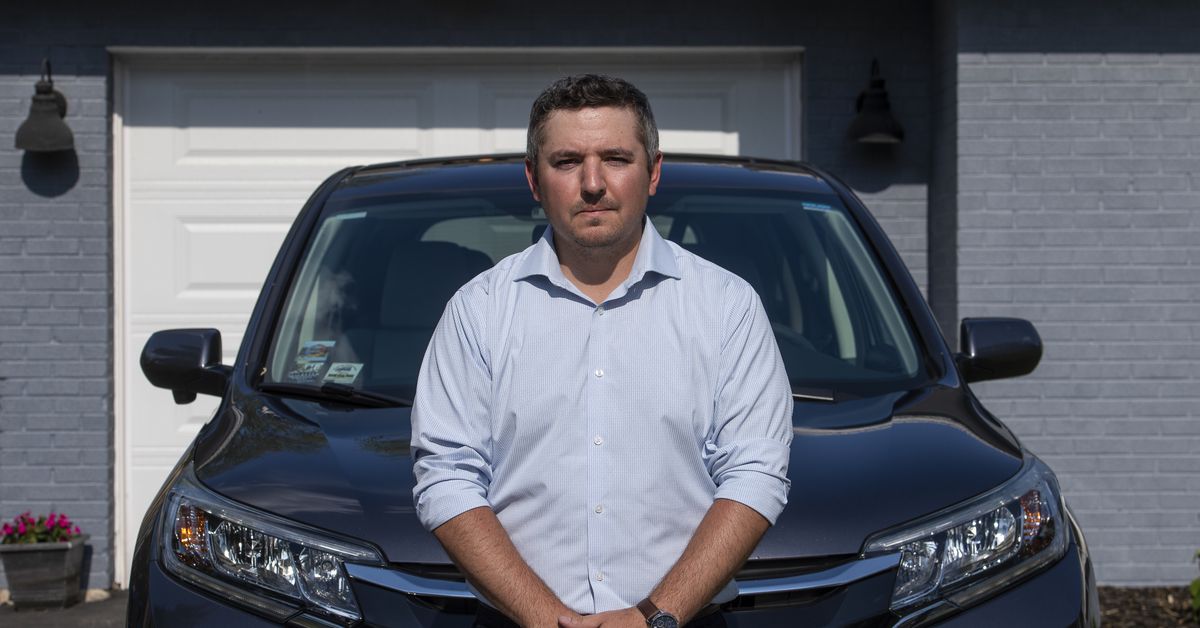 Jay Caracci is aiming to force Honda to cover repairs under its new-car warranty, accusing it of deceptive practices.

The Ultrasonic stuff is apparently woo or snakeoil.

Now you tell me!

Well…I’ve not noticed my ultrasonic devices do anything, but am afraid to remove them. My wife plugged in about 3 or 4 in the garage to keep out critters of all types including bugs, chipmunks, mice, etc. They silently flash all the time. But critters still get into the cabin of her Forester and build nests out of napkins and tissue paper…maybe they go into her car to escape the high pitched noise?

But I’d prefer to just unplug the thingies, save power, free up some electrical outlets, etc. etc. Especially since it doesn’t seem to stop the rodent problem.

We put some rodent repelling sachets into her car. Those might help. But most importantly, note that the rodents leave my car alone. Difference between my car and hers: a lot less trash, esp. food trash. I keep my car trash-free. But she almost always has fast food bags, gum in wrappers, etc. littering the footwell. I think the critters squeeze in through the ventilation system, following the food aromas.

soy-based wiring, which the rodents seem to love.

That stuff degrades too, even without rats chewing on it, right? I remember hearing mechanics grumbling about those wires.

Almost every research/ evaluation site I’ve seen says the ultrasonic doesn’t work for rodents or deer. I don’t know about bugs, I never looked into that. Same with the peppermint and mothballs.

But pepper based products do work as does small carnivore urine like foxes and cats. Groundhogs really don’t like when you dump used kitty litter down their holes, but they just build a new exit so it only helps a little. The fox urine spray gets good reviews and seemed to work for me. I manage to get them away from the house with a lot of work and with a lot of trapping (live animal traps and release elsewhere).

The problem with trapping, is as you remove the groundhogs they just flood in from the neighbors yards.

What reduced the population though was lucking into a fox family moving into the neighborhood. Suddenly the groundhog population dropped way down within 2 years. They don’t live long and the young were being wiped out.

Chipmunks and mice are tougher, they need to be discouraged as trapping won’t help at all. So the pepper based sprays are probably the best hope.

I’m sure our problem is either mice or squirrels. The deer around here eat my hosta, but I’m pretty sure they couldn’t get into the engine compartment of the truck. I read an article that recommended spraying PineSol - anyone ever heard of that?

I haven’t heard of that. But I will mention I’ve had (or believe I’ve had) good luck with cotton balls soaked with peppermint oil tucked around strategic areas of the engine compartments of my vehicles. I’m also careful to remove anything from the vehicles that could tempt a rodent, such as well-wrapped food items or stray food crumbs.

Replacing a wire harness is a high price to pay for a stray french fry fragment.

I use steel wool where there are openings.

Is there a way you protect the harness by wrapping with steel wool?

I wouldn’t advise this. Steel wool is conductive. If you have any slight nick in the existing insulation, you may be asking for trouble.

My brother – who knows a little about a lot – had the problem and solved it with coyote urine: 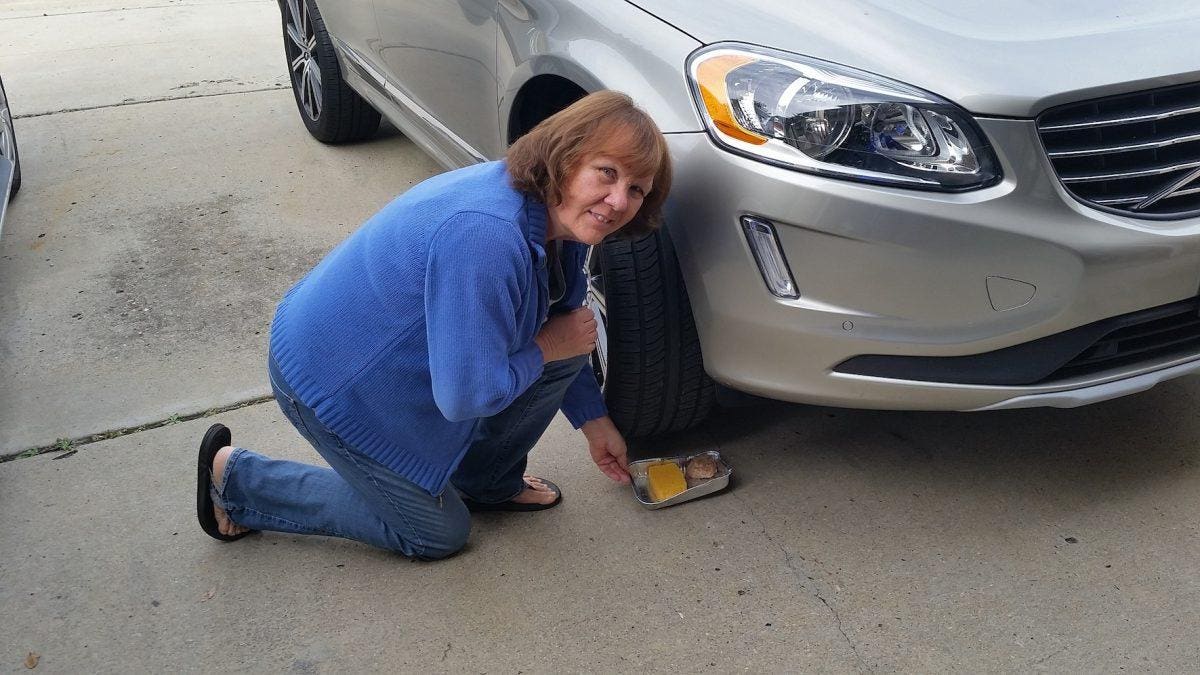 Food in the truck isn’t an issue. It’s strictly used for runs to the dump, the recycling center, and occasionally to Lowe’s or such for larger purchases. At most, we may have a diet soda when we’re driving.

Most of the sprays I’ve seen advertised are peppermint oil. I will ask my mechanic what he recommends, too.

Has to be pepper not peppermint.
There are some.

Recently I was at a government facility, and noticed that all of the trucks in the paring area had their hoods open. I asked the guide why, and was told that it was to keep pack rats from nesting in and damaging stuff in the engine compartment. Note that the parking area was a covered strip out in the desert, surrounded by native shrubland.

We have a lot of pack rats…

I’ve used rodent bait (poison) that come in those small plastic squares and that seemed to stop the problem I was having, but I do have to replace them every so often.

As for steal wool, just a note that stuff can burn and can be lit with a match, so use accordingly.

It’s looking like driving the truck more frequently and finding a good pepper spray should take care of it. I did see somewhere that I need to warn the mechanics when I take it in for service that the innards have been peppered…

I hope a drive around the block will be sufficient - it’s a bit over a mile. Since I’m retired, I don’t go anywhere on a regular basis, so driving it becomes an extra to-do, and I really hate driving…

Most of the primary causes have already been mentioned. Another weird one, they can be attracted by the smell of antifreeze. Some animals even get addicted to it.

It only takes once to drip it down the wires and a sweet smell will be on them for a long time afterwards. Get in the habit of rinsing the compartment with water any time you pour antifreeze or go to the quick-lube place.

The pepper sprays are worth trying; but it may depend on your particular critters.

Once, years ago, I stored a basket of some quite hot dried peppers in an attic. When I went to retrieve them, I discovered that mice had eaten them all. (It was definitely mice; they left evidence.)

My external air conditionally unit has twice been damaged by chipmunks nesting in it in the winter. The repairman suggested i turn it off in the winter, so it wasn’t warm and attractive, and also recommended keeping the grass short near it, which made me laugh, because I’m pretty sure chipmunks don’t notice the height of the grass in the winter, and the item sits on a bed of gravel anyway.

I built a cage out of hardware cloth to keep them out, but that’s not going to be practical for a truck.

But it might help to make it less attractive in any way you can, including temperature, damp, and odor.