How do pool tables know?

How do coin-operated pool tables know that the ball that’s gone in the pocket is the cue ball rather than a stripe or solid, so it can kick it back out?

I believe the cue ball doesn’t weigh the same as the other 15 balls.

Cue balls are smaller If I remember correctly.

The tables are racist.

Actually, I’m fairly certain that the cue ball is very slightly larger than the rest of the balls. 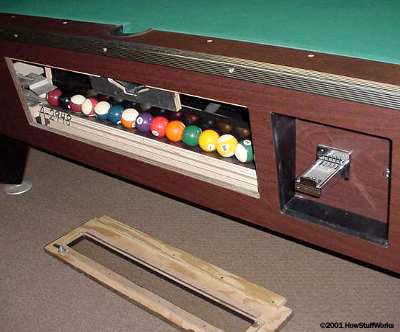 How does the ball return work on a coin-operated pool table?

My pool game was in top form a few years ago, when a buddy convinced me to play in a tournament at a local bar, with coin-op tables. It was such a completely different game on those tables, let’s just say I didn’t do very well. The smaller bar table size (7 feet vs. my 8-foot at home) made a big difference, but the biggest difference was the very obvious size difference between the cue ball and the object balls. I have this picture in my mind that it was as apparent as the difference in size between a softball and a baseball, but that’s exaggerated. It was, however, plenty big enough to throw off all but the shortest shots.

I had a feeling that might be what this thread was about. I asked the same thing over a year ago. Nice to know that someone else is curious about the same things as I :).

Well, I’ve been waiting years for someone to ask a question about a topic I know about!

Dynamo’s tables use a heavier cue ball. A balance is used to divert the ball down a different track.

Same is true for Valley’s tables.

The larger ball, since it is also heavier, will work in all tables, incidentally. But woe be unto those who put a Vally cue ball into a United table! It’ll go down with the other balls! A veritable catastrophe.

That said, I guess I’ll have to wait a few more years for someone to ask this question again, since it’s the only topic that I have any knowledge of.

Each method has its drawbacks. A heavier cueball will change the rebound angles after a collision. A bigger cueball will prevent you from cutting balls that are frozen to the rail.

Excellent bar pool players know how to compensate for the cueball differences on the various different types of table.

For instance, if you are shooting with a big cueball, and want to cut a ball into a pocket that is frozen on the rail, you can shoot a firm shot into the rail just before contact with the the other ball. The cueball will compress into the rail before it hits the other ball, thus allowing it to be cut down the table.

CurtC, if you really want to mess up your game, come play on a pub table in England! All the balls are smaller and lighter, and the pockets are far narrower. I wasn’t that good at pool when I lived in the US, but I’m completely useless at it here!

Well, the OP’s already been answered but I’ll add a couple things. 2 other solutions are: a magnetic cueball (not so common anymore) and a light sensor that that identifies the cueball because it reflects more light than the others. Diamond Billiard Products uses the latter setup in their new bar table line and this setup allows one to use a regulation set of pool balls so you don’t have to deal with a size/weight mismatch between the cueball and the object balls. See http://www.diamondbilliard.com/smart_table.html for more info. I own a Diamond Pro in walnut at home, it’s the 9’ table which is similar to what most professional tournaments are played on. I am not in any other way affiliated with them and this is not an attempt to sell one of their tables.
Sam Stone, on cut shot along the rail, one **never ** hits the rail and ball at the same time unless the object ball is already close (within about 1 diamond) to a pocket. This is a common error in teaching pool but most current books on pool will correct this. The reason is that the frictional forces between the balls will force the object ball into the rail. If you’re interested in the physics of pool, check out Amateur Physics for the Amateur Pool Player. This document contains some calculus but the author takes the time to explain the results with real world examples so you can skip the equations if they’re boring you and just read the explanations. Everybody needs a hobby, guess what mine is?