How long has it been since you've seen kids jumping rope or playing hopscotch?

One of my most vivid summertime, childhood memories is seeing kids with jump ropes and hopscotch boards drawn on sidewalks.

You couldn’t hardly walk down a suburban, neighborhood street without seeing a girl carrying a pink or purple, plastic jump rope with white handles. A lot of girls jumped rope and some boys. I always enjoyed it and still exercise with a jump rope every morning.

There would usually be a hopscotch board drawn on the sidewalk of at least one house on every residential, suburban street. It would be redrawn after a heavy rain. Sometimes in front of a different house.

It was a bit more unusual to see a group jumping rope. That required a long rope and people on each end holding it. Sometimes you’d see three kids jumping the rope at once. That’s pretty cool.

I see kids on my street, playing basketball and skateboarding.

I can’t recall seeing a kid with a jump rope in 12 years. I did see a sidewalk hopscotch board in another neighborhood a few years ago.

Are parents just not introducing kids to these games anymore?

I bought jump ropes for my daughters when they turned six. My wife taught them hopscotch on our driveway.

How to play hopscotch. Several comments said they would teach their kids. 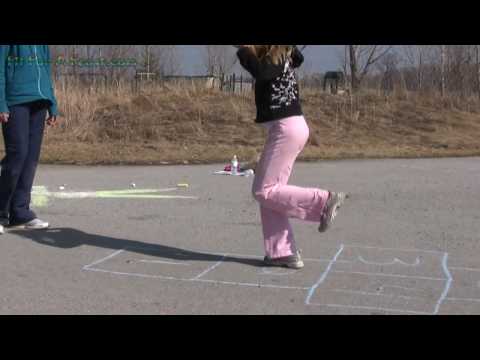 Here’s a Cool team jump rope video.
The kids I grew up with did many of these tricks. Except we didn’t have a cool sound track.

Jump ropes are a lot of fun for any age. 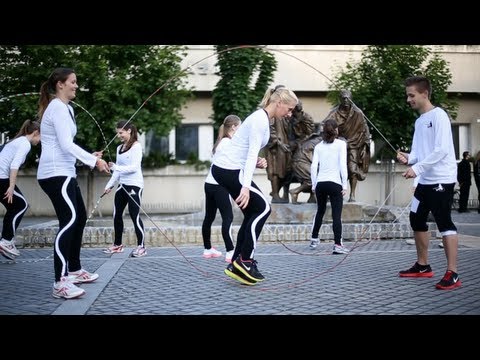 I saw a girl playing a jump-rope app on her iPhone… does that count?

Daily here. These games don’t take a lot of resources. Chalk and a rope.

20 years or more. Around here school playgrounds still have the hopscotch grids but I can’t remember the last time I saw one actually being used.

Is there an app for their smart phones?

I don’t pay too close attention to what kids play, for fear of “weird creep old man alert” situations, but I see a lot of the traditional games marked out on playgrounds and school yards, so I don’t think hopscotch and four square and handball are dead yet. Though skipping rope is not something I’ve seen in a long time, I admit.

I think my niece learned how to skip rope in her first grade gym class last year. She had some ropes at my mom’s house and would do it on occasion. Mom taught her and the younger niece to draw and play hopscotch too.

They’re more in to bikes and slip’n slide this summer.

Is there an app for their smart phones?

I was only kidding upthread when I said I saw a girl playing a jump-rope app.

If there actually is such an app that would be… sad? Ironic? Horrifying?

You thinking of shorting the chalk and rope market?

My daughter is a very serious competitive gymnast. She and her friends are among the best in Massachusetts, New England and the U.S. as a whole. They could all pass the physical part of Marine boot camp right now at 10 or 11 years old. A 20 foot rope means nothing to them. They can go up and down as many times as you want. They could make monkeys blush.

My daughter’s gym sometimes sets up impossible obstacle courses and lets them compete against each other. They all finish and my daughter usually wins even though it is just an improvised version of American Gladiators.

Not all kids are sitting on their asses. My daughter trains extremely hard at 30+ hours a week while going to school. Nobody is forcing her into that. It is just that she wants it. It would be a whole lot cheaper if she didn’t but I have to support her talents.

To answer your question directly, my daughter jumps rope most days but it is for Rocky style training. I have several jump-ropes myself because it is one of my favorite forms of exercise.

Noticed a hopscotch layout chalked on a sidewalk just a few days ago. I remember this because at the time I thought to myself “Hopscotch. Haven’t seen that in ages.”

Honestly I just don’t see that many kids playing outside much anymore.

There’s a hoop two houses down from me. The kids are in the street playing. I live on the side of a hill and they skateboard on the street. My street gets very little traffic. I have to drive very carefully passing them.

Kids were everywhere during the summers when I grew up. Riding bicycles, playing games, just hanging out in somebody’s yard.

It’s strange how empty the streets are now.

I’ve seen hopscotch grids chalked onto the sidewalks near my house several times this summer.

I’m not sure that I can remember the last time I saw kids jumping rope – but then, I wasn’t looking for it, either.

What about impressive rope jumping? Say at least double Dutch.