How much frailer are modern washers than older ones?

I’ve read that modern manufacturers make washers that are much daintier and have a shorter lifespan than the robust 1980s ones, apparently because this makes buyers have to buy more machines than before. One technician quoted me a lifespan of only 1,600 cycles for a Whirlpool WTW5000 type washer, whereas the older parents-or-grandparents generational washers apparently lasted several times longer than that.

Is 1,600 really all a modern top-loading washer can do, or can it do more?

Are there any real stats available? That would make comparing the old against the new a lot easier.

Part of the issue appears to be that front loaders have more points of failures and thus you hear people saying washers only last 7-10 years now where they use to last 15-20 years.

I think front loaders do last legitimately less time. Problem is, it is hard to find stats, just anecdotes.

I’ve been amusing myself by keeping our front loader going past the point at which it would be uneconomic if I didn’t do the repairs myself. It is the first washing machine that I’ve ever worked on so I can’t say how it compares in complexity to older machines but I must say that I have been pleasantly surprised at how simple and easy it is to work on.

I would have thought that older machines would have been more mechanically complex (and less reliable) because they would have required a lot of electro-mechanical control systems. Contrastingly, the modern machines have a microprocessor that controls everything, and solid-state electronics are notoriously reliable. I’ve had to replace the main motor, the dampers for the drum, and one relay in 15 years. Replacement of the motor and dampers was trivially easy. Tracking down the failing relay took me a while but was ten minutes of soldering once I figured out the problem.

What will eventually stop me is corrosion of panels and lack of parts. Already some parts aren’t available and others are extortionately expensive unless you can find a generic equivalent. We were told by a service person years ago that it would be cheaper for us to get a new machine than for him to fix it.

Dampers and the main motor and relays are quite hard-working components and I would have thought that a 10 – 15 year lifespan was pretty reasonable.

I certainly have recollections of washers used by my parents’ generation requiring repair from time to time. I suspect the real issue isn’t that washers now don’t last – it’s that servicing has become so expensive, and new products have become so cheap, that the equation has tipped towards early replacement.

I’ve been amusing myself by keeping our front loader going past the point at which it would be uneconomic if I didn’t do the repairs myself.

My understanding for a front loader is the main bearing for the drum gives out and is not worth replacing vs a new machine. Have you hit that problem yet, or foresee it?

No signs of it yet. It isn’t noisy. I haven’t had to think about that aspect of the machine yet so I haven’t looked at what would be involved. Is the suggestion that the part is expensive, or that the bearing is very hard to access?

Not sure. I went through two front loaders in four years, the bearing was the reason. Kenmore and I think Whirlpool. The second time the repair person pointed me at Korean makers, and my Samsung washer is going well 9 years later. What maker are you nursing?

I certainly have recollections of washers used by my parents’ generation requiring repair from time to time. I suspect the real issue isn’t that washers now don’t last – it’s that servicing has become so expensive, and new products have become so cheap, that the equation has tipped towards early replacement.

I’ve been told ‘if it had a metal drum it would be worth repairing, but with a plastic drum it’s not’, and he explained that he meant a bit of both: replacement is cheap, and, when a modern washer fails anywhere, it means that the rest of it is also worn and due for failure.

Now in building of chaises, I tell you what,
There is always somewhere a weakest spot, —
In hub, tire, felloe, in spring or thill,
In panel, or crossbar, or floor, or sill,
In screw, bolt, thoroughbrace, — lurking still,
Find it somewhere you must and will, —
Above or below, or within or without, —
And that’s the reason, beyond a doubt,
A chaise breaks down, but doesn’t wear out.

We purchased a Maytag Performa washer & dryer in the early 1990s. Washer is a top loader. Both have old-style dial controls.

Both are still going strong. For the washer I once had to replace the water inlet filter screens. A 5 minute job.

On the dryer, I once had to replace the impeller fan.

Anecdotal, I know. But I don’t hear about this kind of reliability with new washers & dryers.

But I don’t hear about this kind of reliability with new washers & dryers.

What about new Maytag washers and dryers?

They have always marketed themselves as being insanely expensive and extremely robust and long wearing. And while such claims are often hot air, my understanding is that Maytag’s claims are or at least were true because they were basically industrial machines.

A decade or so back, we had to call a dryer repairman for the avocado dryer that had been left in the house by the sellers. By that time, it was well past its prime and we had to replace it. Discussing alternatives with the tech, he said that while Maytag used to be the best of the best, they’d taken to replacing metal parts with nylon, and that adversely affected reliability. One anecdotal data point, but we opted not to get a Maytag. Our Samsung washer and Whirlpool dryer are doing just fine, even after 2 years of extra laundry when my daughter, SIL, and granddaughter lived with us.

Is the suggestion that the part is expensive, or that the bearing is very hard to access?

It’s both, but mainly the latter. When the main bearing on my LG front loader failed, I found repair instructions for it, and they were not reassuring. It turned out that you had to disassemble and remove essentially every single part in order to access the main bearing, so that you had literally an empty metal shell and the washer in pieces all over the floor. Then you basically rebuilt the entire machine, substituting the new bearing.

This was not something I would ever have attempted myself, and it didn’t bode well for the cost of the repair. I did speak with an agent at LG who told me that I qualified for a special $100 flat fee repair option that they offered for a limited time after the warranty expires. I thought about it and decided it would be stupid to buy a new washer when I could get the old one fixed for just $100. I called them back and got a different agent who informed me that the first agent had been mistaken, and that I was past the special-offer time limit. Not much past it, mind you, but past it nonetheless. They refused to budge, so basically after a premature early failure on an expensive washing machine, the message I was getting from LG was “sucks to be you”. I will never buy an LG product again.

Discussing alternatives with the tech, he said that while Maytag used to be the best of the best, they’d taken to replacing metal parts with nylon, and that adversely affected reliability. One anecdotal data point, but we opted not to get a Maytag. Our Samsung washer and Whirlpool dryer are doing just fine

I’ve heard the same. I replaced the above-mentioned LG front loader with a Maytag top loader, but not under any impression that it would be super-reliable. It was just because so many washers were getting poor ratings, and this one was rated fairly well. It’s actually the same machine as was rebranded by Kenmore and got high ratings by someone credible (maybe Consumer Reports? I don’t remember). The worst criticism by some is that it was “noisy” when running, which I don’t find to be true at all.

Anyway, it has a slogan under the Maytag logo that says “commercial technology”. I am under no illusions that this is anything other than a lie, a marketing attempt to exploit the reputation of their commercial line. I’ve heard, for instance, that it uses nylon or plastic gears rather metal ones. Anyway, I’m perfectly happy with it though I’ve only had it several years. It uses more water than a front-loader but is still water- and energy-efficient, using HE detergent and auto-filling with only as much water as necessary. As I expected, I prefer a top loader to a front loader. And at this point I would prefer anything to an LG.

In the Aughts, I bought the cheapest washer from Sears. The sheet metal was so flimsy they included a metal rod spanning the middle of the bottom of the washer that was to be removed upon install but to be “kept” in case you planned on moving the washer in the future. Without the metal rod, the washer could be damaged when being moved. Nonetheless, the washer took abuse. Due to consistent over-loading the drive belt frayed to failure but repair was relatively easy and machine is still going today.

I nursed my Extra Heavy Duty Sears top loader for 20 years at the last place. IT was fairly easy to work on. Prior house was also a washer from Sears and easy to work on. I’ve worked on Dishwashers & Dryers too. While I’m at it furnaces, boilers & water heaters also.

I have zero experience with front loading washers, but I keep hearing that today’s appliances are only good for about 7 years. I hope that is not true.

I suspect consumers in the 1980s were moaning about how crappy the new washers were compared to 1950s models.

On the other hand, these babies hardly ever wear out. 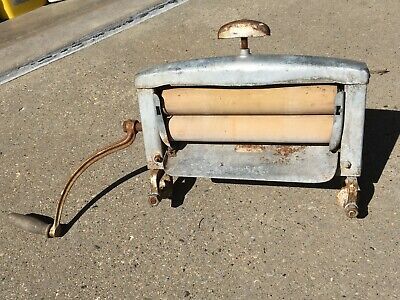 Modern washers will be designed with parts that have a specific lifetime based on an actual history of machines built over time. Go back to the 80s or earlier and machines were somewhat over designed at a time where the lifespan of those parts wasn’t as well known. They would have used much less plastic as well. It’s not just washers, just about everything changed in this manner, and not always for the worse. It’s likely that washers don’t last as long as they used to altogether but that they do last longer now without needing any repairs along the way.

I suspect consumers in the 1980s were moaning about how crappy the new washers were compared to 1950s models.

Well, anecdotally the last “old” washer I had from around the 70s lasted nearly 30 years and was probably still repairable at that point, but I decided to get a one anyway. That one was sold with the previous house after a few years. My next new one was the above-mentioned LG front-loader which failed after something like five years, with cost of repair making it prohibitively expensive to fix. The fact that old-timers like to whine about how much better things were built in the old days doesn’t mean it isn’t true. Product quality is a constant tug of war between technological improvements that make things better and incessant cost-cutting that tends to make them worse. Sometimes one side wins, sometimes the other. A lot depends on how competitive the marketplace is. The appliance market has seen a lot of consolidation in recent years.

Thanks for the replies everyone, but…getting back to the OP…is 1600 cycles the typical lifespan now or not?