How should Trump respond if Putin threatens to blackmail him?

I tried posting this to a general area on Reddit, but I think the conversations here tend to be a bit more interesting to follow. Both sides and the voting system screw up questions either with “huyck-huyck Trump is evil and an idiot” and “huyck-huyck, Trumps 12D chess is really pissing off the libtards!”

Since this can get sidetracked without ever getting to the question I’m asking, for simplicity’s sake take/accept a few things as completely non-rebuttable. It’s not that they’re non-rebuttable in general, just that they narrow the thread and avoid it getting bogged down in irrelevancys. Regardless of your political leanings, underlying beliefs, credulity and etc., take the following as granted:

[ul][li]Throughout the entire campaign and presidency, neither Trump nor his staff ever intentionally or inadvertently reached out to (or were contacted by) Russian/other operatives in any meaningful way.[/li][li] Neither Trump nor his associates have any aberrant or suspicious financial ties to Russia or elsewhere.[/li][li] Neither Trump nor his associates have any secrets or shenanigans that could compromise them.[/li][li] It’s a truly private meeting; once the doors close, both Putin and Trump are fully and securely sealed off from any outside or inside recording or interference.[/li][li] Neither leader is there to sing Kumbaya and will press whatever advantage they can.[/li][li] Putin and the FSB recognize that there is an opportunity for coercion.[/li][li] Putin and the FSB are willing to lie and fabricate if it benefits them/Russia.[/li][li] Putin and the FSB are reasonably competent at what they do.[/li][li] Despite the appearance of being very impulsive and blunder-prone, behind closed doors Trump is at least as shrewd and calculating as you are (or assume he brainwashed your clone and will follow its advice)[/ul][/li]
Putin tells Trump he wants A, B and C, and is only willing to do *x, y, *and *z *as political cover. Trump does not want to do A, B or C, and even if he did, doesn’t think *x,y, and z *are worth it; it’s a very bad deal. A, B and C are not comically villainous, just terms that Trump finds very objectionable on their face, and certainly not worth *x, y *and z.

Putin says the terms are firm, telling Trump of varying levels of very believable, all be it fabricated evidence that his security operation has prepared and already planted. This ranges from petty bullshit that will keep the investigations alive and the overall issue dominant in the news cycle for years (even moreso than they are now); to heavily damaging “evidence” that will likely lead to substantial electoral losses in 2018 (i.e. flipping the House and/or Senate) and the resignation of several close aids and/or cabinet members; to extreme “evidence” that will make it very difficult for Trump to avoid impeachment by his own party. While this “evidence” may implicate some sacrificeable Russian officials/allies, it is crafted in such a way as to not significantly damage Russian interests in general or Putin/croneys himself.

From the perspective of Trump or an adviser or as a fortune-telling genie predicting what he’ll do:

[ol][li]Is there any realpolitik reason to think that Putin and the FSB are not actually working very hard to figure out how to turn the above to their advantage?[/li][li]How should Trump prepare himself for the possibility?[/li][li]Does Trump refuse to believe that Putin and the FSB are capable of carrying out this threat?[/li][li]Does he call Putin’s bluff and try to rebut the steadily building stream of growing-in-importance “evidence” that starts to come out?[/li][li]If that “evidence” starts doing severe damage to the country and the administration, does he ever yield to Putin? If not, does he ever resign rather than further damage the country?[/li][li]If he refuses, how does he counter; what leverage can he muster against Putin that hasn’t been tried or used so far?[/li][li]If he does refuse the deal, who in his administration does he tell in order to prepare a response/try to debunk the fake evidence?[/li][li]Does he capitulate, risking later, even worse deals on the idea that though Russia ‘wins’ in this setting, he can do better for the country overall as long as he stays in power?[/li][li]What if Putin does come to Trump (now or eventually) with comically villainous demands (i.e. major CIA/NSA secrets and access, exorbitant amounts of money, assassination of Putin’s political enemies, etc.)? Does Trump ever resign with the secret honor of avoiding damage to the country?[/ol][/li]I hope I wrote this carefully enough to be answered by supporters, detractors and everyone in between. I get it that you may choke on some of the premises, but they make the question cleaner. Noone is going to think you believe them if you don’t hijack the thread to say “but of course theres evidence he colluded!” or “but he’s already a puppet!”

I’m not sure how we’re supposed to objectively speculate on what Trump might do without being biased by our opinions of Trump’s character.

That said, I don’t see Trump ever being inclined to make any kind of personal sacrifice in favour of the country or anything else, with the possible exception of his children.

Since you are speaking of “evidence” of some act(s) to damage him politically, as opposed to say, a protection racket-style “Do X, Y and Z or else we sabotage your businesses”, this is how blackmail works:

If you think you can survive disclosure, real or imagined, you either go to the police or tell the guy to take a hike.

If you don’t, you do what the guy says.

So the question is, what act would he have to be accused of that Trump would consider bad enough that he couldn’t survive?

That said, I don’t see Trump ever being inclined to make any kind of personal sacrifice in favour of the country or anything else, with the possible exception of his children.

I can’t see Donald sacrificing his children as in Biblical or pre-columbian times, not even for the best deal he could get for his beloved homeland.
Apparently it still goes on in parts of Africa.

So the question is, what act would he have to be accused of that Trump would consider bad enough that he couldn’t survive?

“Mister Trump, we have footage making it seem you shot a guy on Fifth Avenue.”
“And?”

“Mister Trump, we have footage making it seem you shot a guy on Fifth Avenue.”

“So what? I’ll photo shop CNN’s logo over the guy’s face and put it on Twitter.”

I can’t see Donald sacrificing his children as in Biblical or pre-columbian times, not even for the best deal he could get for his beloved homeland.
Apparently it still goes on in parts of Africa.

If we’re presuming a universe where the first three “take the following as granted” items are true, my answer is that Trump sends a team of eleven commando elves led by Elvis up the Kremlin elevators to plant tamper-proof time bombs that will give Putin elephantitis unless he backs down.

Since you’ve required us to consider him innocent and “as intelligent as yourself”, bringing Trump into the equation at all is a bit pointless. You would have done better to simply ask, “What would you do?” And then you wouldn’t have to worry about people getting sidetracked.

If I was innocent, but being popularly accused of treason by the press, and was being blackmailed by an enemy state - not with evidence of my guilt, just manufactured evidence of my guilt - my strategy would be to perform the following three things:

If I am innocent, then I have no reason not to be completely transparent. And if I am at risk of having information manufactured, then speed of clearance and getting data “safe” are of the greatest importance.

And feel free to repost my answer to Reddit, if you want.

**How should Trump respond if Putin threatens to blackmail him?

**Same way as he has been up until now. It’s too late to change up the routine, there’s an investigation.

Trump will cry, ‘FAKE NEWS!’ and ‘Failing Putin lying! Sad!’ IOW, he’ll just deny it, and blame his enemies, real and perceived. His base will believe him.

“Psycho Putin threatens me with FAKE LIES. BAD SICK man! I’m President and he’s not. We will covfefe #MAGA #IHaveNukes”

Crazy Monster Putin is a SAD LOSER who says BAD things. We will nuke Russia off the MAP and MAKE AMERICA GREAT AGAIN! #MAGA #IHaveNukes

I think Trump’s so used to getting away with whatever he wants that he’s impervious to blackmail.

Now the OP is funny in that I’m supposed to pretend Trump won’t act like Trump. I imagine a real President would immediately and discretely report the conversation to his security council and the major intelligence agencies. But Trump is Trump and we can be sure he wouldn’t do that.

Now I’m kind of hoping that Putin tricks him into handing over his wedding ring. 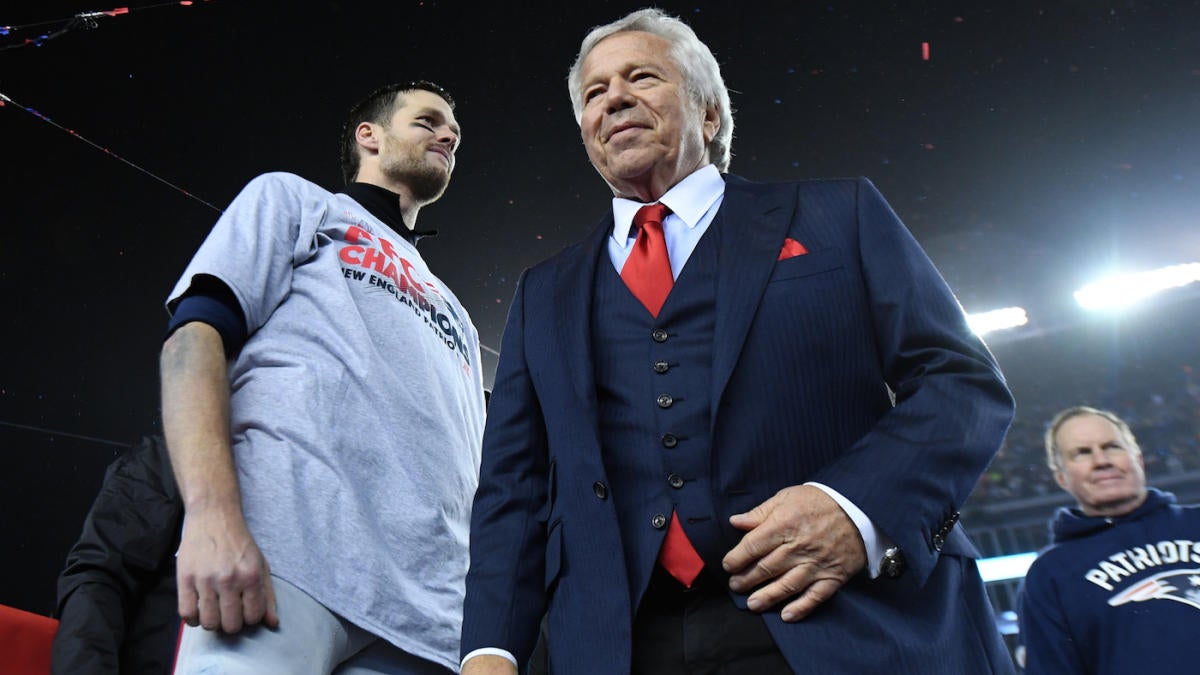 Here's how Vladimir Putin stole a Super Bowl ring from the Patriots' Robert...

The Patriots owner only has three of his four Super Bowl rings. Putin has the other one

It would make a nice addition to his collection.

Now I’m kind of hoping that Putin tricks him into handing over his wedding ring.
Here's how Vladimir Putin stole a Super Bowl ring from the Patriots' Robert Kraft - CBSSports.com
It would make a nice addition to his collection.

And maybe Alaska, too!

Putin won’t utter raw threats to Trump. He’s much more likely to flatter Trump and say that he, Putin, is Trump’s most valuable ally against the Deep State and the US media.

And then he’ll get Alaska.

Isn’t either Putin or Trump into that? I swear I read that.

Isn’t either Putin or Trump into that? I swear I read that.

It was a misunderstanding. Putin was giving Trump a tour and Trump was asking where the linens came from.