We’re having Easter with my wife’s family, which now that her parents are getting on in age, is rotated among her siblings, and it’s a potluck in which we all bring a dish. My wife volunteered to make her family’s beloved cheesy potatoes.

For those who aren’t familiar with cheesy potatoes (I wasn’t before I met my wife; it wasn’t a thing in our family growing up) you typically start with frozen cubed hash-brown style potatoes, mix with sour cream, cream of something soup, shredded cheddar, top with crushed up corn flakes, and bake to oozy perfection.

So my wife sent me to the store to pick up cheesy potato ingredients, but the shelves were cleaned out of frozen potato cubes. A lady who saw me frantically searching said “are you looking for frozen hash-brown style potatoes? This is the sixth store I’ve been to and I can’t find any”.

My wife was upset to hear this, but I said “never fear! I may not be good for too much, but I’m a pretty decent cook and there are plenty of fresh potatoes to be had!”

But, all the cheesy potato recipes I find online say to use the pre-cubed frozen potatoes. I’m not sure how exactly to go about prepping the potatoes. I don’t think cutting up raw potatoes and baking will work, I’m pretty sure they need to be cooked before mixing into a casserole and baking, but how? Pre-baking or boiling, then trying to cut them up into cubes, then mixing and baking seems like it would just result in a mushy mess. Do I bake or boil the potatoes, then let them cool, so they’re more cohesive for cutting up? Do I cut them into cubes, bake them on a cookie sheet, then put them in the mix and bake?

If it’s anything like this recipe, then bake, cool, then cut/shred, and the rest. 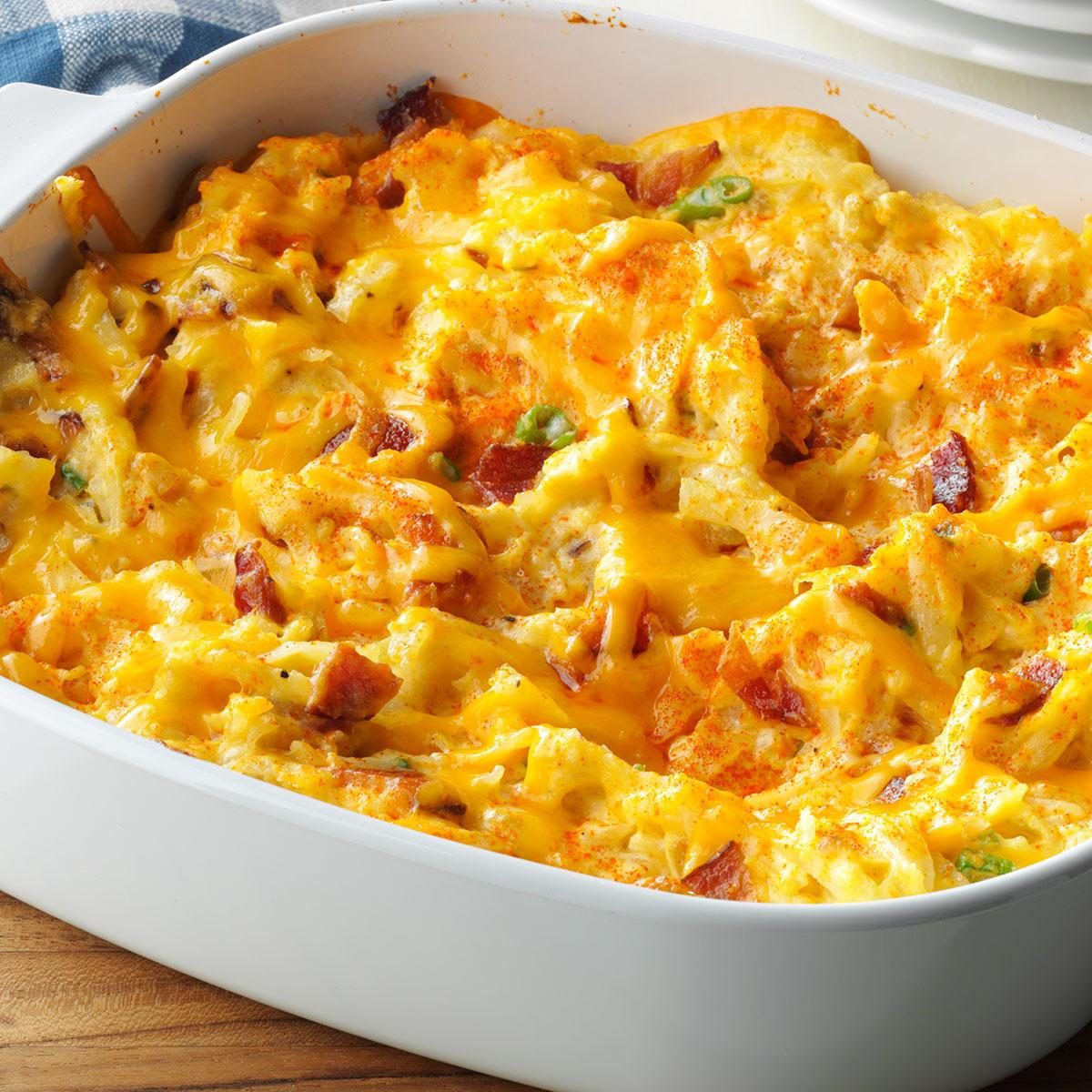 For my family, comfort food often comes in the form of a potato with gooey, cheesy goodness. No gathering or special occasion is the same without it. It's tradition in our family that once a recipe is bestowed upon you - you add one ingredient to...

Thanks, that’s pretty close, and I suspected the trick would be to cook then cool the potatoes before cutting them up. But that recipe calls for baking, letting cool, then “peeling and grating”, not cubing. I’m skeptical how feasible it would be to peel a baked potato. Seems like it would be a mess and you’d lose a lot of potato with the peel.

This recipe says to boil them, then let cool slightly before dicing up. I guess that’ll work- that’s how potato salad is made, and the potatoes stay in fairly cohesive chunks.

No need to peel baked potatoes. After they cool, you just take 'em in both hands and twist.
Works for boiled or baked 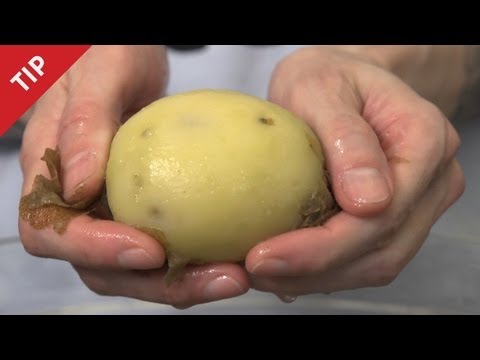 I’d peel them first, but that’s what I’ve found to be the best way to par boil potatoes. I was beginning to think the linked recipe was useless but then I saw near the end of the list the crucial ingredient, bacon.

No need to peel baked potatoes. After they cool, you just take 'em in both hands and twist.
Works for boiled or baked

Wow, that is a genius hack, thanks! I’d suspect that’s one of those fake life hack videos if it didn’t come from Chow, it looks so easy.

Yeah–my brother-in-law showed me that back in the late '90s (he did a lot of cooking and catering).

Hope you get this figured out. As someone who does not do these frozen casserole things (but has always cooked extensively with fresh potatoes), I too encountered this from my wife’s family. However, they use frozen hash brown shredded style (not cubed, which are generally referred to as “home fries” in my experience). Any time there is a major holiday, most of my stores are out of these, frozen broccoli, Velveeta in 1lb blocks (I am forced to buy 2lbs for the 1lb I will use all year). I’m assuming you already looked for the non-frozen shredded potatoes (ug, I guess you need the cubed? They are there, too)? They are usually near the eggs at all the stores I go to, and I don’t think it would be too difficult to make them work.

I was blown away by this latke recipe which asks you to first bake the potatoes but not fully.

Once they’re cool enough to handle, cut them in half (perpendicular to the long axis), and then grate them on a box grater. The potatoes grate brilliantly, and the skin pulls away as you grate, leaving you with the empty potato skin in your hands when you’re done grating.

And, the potato you end up with is mostly cooked through, and will absolutely finish up in a caserole bake or whatever.

It’s my new favorite technique for potatoes for latkes or hash browns - you only have to worry about browning the potatoes and not about whether any of it is going to still be raw.

(also, the bake and grate can be done the day before, leaving minimal work and cook time when you actually want to eat).

I would cube the potatoes and microwave them on high for about 5 minutes. Then follow your recipe.

The “boiling potatoes whole, then letting them cool in cold water and just pull the peel right off” trick worked like a charm. Thanks again, @TheCuse!

As God is my witness, I will never peel potatoes before boiling them again.

Boil small potatoes without peeling. Grill the cheese until it melts and scrape it onto the plate. Serve!

Start a new tradition.This is always my go-to involving cheese and potatoes…

A rich, stretchy, smooth, and silky French dish, pommes aligot combines mashed potatoes with half their weight in melted cheese for a winter dish that will warm you from the inside out.

So, just to follow up, we had a bag of ‘O’Brien’ style potato cubes (with bell peppers and onions) in the freezer, so to hedge her bets my wife made a batch with those and a second batch with the potatoes I boiled from fresh. She’s used the O’Brien style in a pinch before when the plain frozen cubed potatoes were scarce, and I actually like it better than the plain, but it’s not ‘traditional’.

I thought the batch with my potatoes turned out good, a bit soft though-- I think I overboiled the potatoes a little. The final consistency was more like cheesy mashed potatoes than discrete potato chunks. It still got completely devoured, while there were leftovers of the O’Brien batch.

The easy fix for that is to make kittenblue’s Cheese Crack:

Cube the cheese-like substance and pile in a non-reactive bowl. Pour all the other ingredients over it and chill a couple of hours. Use a food processor to blend the disgusting mess together. Trowel into ramekins and chill. Let come to room temp. before serving. Serves as many people as there are ramekins, because they will not share.

Might have missed it, but I’ll ask anyway,
What kind of potatoes? Waxy potatoes keep their shape much better than starchy ones do.

And that’s why the best potato salad uses a mix!

Might have missed it, but I’ll ask anyway,
What kind of potatoes? Waxy potatoes keep their shape much better than starchy ones do.

Ahhh yes, I used russets (Idaho) potatoes, so that may have been the issue. Should have probably gone with Yukon Gold…? Oh well, it was still plenty tasty, just not as cubey as usual. So I managed to not quite ruin Easter.

Will remember for next time, if I ever need to help make cheesy potatoes from scratch again, or I make a potato salad-- use Yukon Gold, or a mix of Yukon and Russet. Thanks for the tip!