This pandemic has been compared to the 1918 Spanish flu due to its spread. The death toll of the 1918 pandemic was far higher. I am curious as to which medical advancements have made this disease less lethal so far. Would the 1918 flu have been much less destructive with today’s treatments? What in particular has been most effective?

I meant to include a question of: How would the 1918 world react to our current pandemic? Is it more or less treatable with their methods? Sorry, first OP

Well, it might just be a less lethal disease. It certainly has a different profile, as it mostly kills the old, whereas the 1918 pandemic flu mostly killed young adults.

But we also do have better treatments. We have potent anti-inflammatory drugs, and anti-clotting agents. We have ample sterile IV fluids. We have oxygen concentrators (and a cheap way to measure oxygenation.) We have respirators. We have artificial antibodies that can be infused.

Thank you for your reply. How do you think early 20th century medicine would have fared against COVID 19?

Since the influenza virus was not identified until the 1930s, Covid-19 would probably have been grouped in with the Spanish flu and other earlier pandemic flu strains as just another variant of a single loosely-defined entity based on having a range of similarish symptoms and high mortality.

Principles of maritime quarantine [holding ships that had left infected ports within the incubation period, physical isolation of passengers, disinfection of goods etc] and epidemic control [distancing, face masks] were well-understood and sometimes implemented with enough rigour to make them worthwhile. They made some differences with 1918-19 influenza.

However, the key difference with Covid-19 is ability to infect well before the carrier manifests symptoms. I suspect that this, with the poor ability to track individuals in time and space or any way to differentiate uninfected from asymptomatic individuals, that would have quickly cut through the measures that did work for the influenza.

Once people became sick, anything short of strictly enforced shutdowns would be unlikely to them reduce the spread through the community. Here in Sydney the protocol is for 14 days isolation after contact with a suspected carrier. If asymptomatic infection is not recognised [and its hard to see how it would be without knowing about viruses, except as a theoretical epidemiological construct] then isolation is likely to have only been timed based on visible symptoms, which would be way, way too late for how covid works.

I don’t know how 1918 vintage medicine would have fared against people with strong covid symptoms. I suspect not very well. But worth considering that they’d just been through a long war where they had to make up cures and treatment from scratch against frontline gas injuries, so they may have been keen to try some experimentation, and may have lucked onto something by trial and error. Bad luck if you were being given radium tablets to see if that helped at all.

The next problem was that the international exchange of scientific information, including treatment regimes, was still disrupted and very fragmentary after the war and was essentially shit. Somebody in Sao Paolo or Harbin might have come up with an effective treatment but it would not be disseminated for a decade.

And, because the war had sadly not winnowed the proportion of jerks in the world, all of the directly unhelpful behaviours and wilfully stupid and dangerous political decisions would still be working to corrode any positive progress.

If you want to know how it would have been treated – probably much like they treated flu. That included rest, warm fluids, and similar low-tech supportive care. They might have boiled a pot of water in the room, perhaps with some camphor in it to open up the airways. It also seems to have included enemas, based on my recollection of the book: 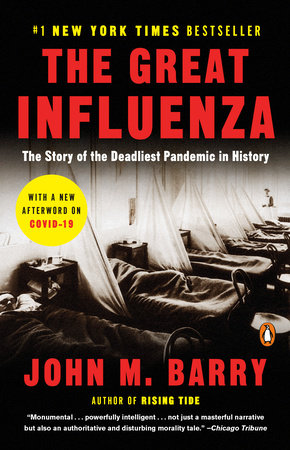 #1 New York Times bestseller “Barry will teach you almost everything you need to know about one of the deadliest outbreaks in human history.”—Bill Gates "Monumental... an authoritative...

Americans of that time believed in keeping the bowels open much as Americans today believe in keeping well-hydrated and popping vitamin C. “It couldn’t hurt.” Heck, as Banksiaman says, they might have experimented with radium.

I guess I am wondering, as morbid as it is, how bad this disease would have been in 1918. With regard to deaths and massive disruption. I know its very hard to tell considering all of the other disruptions that were ongoing at the time. Would this pandemic have been worse than the 1918 pandemic, if it had happened then?

I suppose its been answered by the previous posters. Nevermind.

If, instead of the Kansas Flu (named following former presidential practice, since it most likely did not emerge in Spain) Covid 1919 emerged in Manchuria and started to circle the Earth, then we probably could say:

I’d go further and speculate that:

That reminds me, is it true that our current flu strains are mutations from the 1918 flu? We don’t need to call it Spanish flu, I know that was an misnomer that stuck. It seems with the variants that keep popping up that COVID will be here forever. In that regard it is similar. I am in favor of everything to reduce the damage but I think it seems that way. I am not in any way an expert

Traditional methods of quarantine and containment did not work

Traditional methods of quarantine were specifically targeted at invisible disease that nobody understood. The word itself is derived from the 40 days ships were required to stand at anchor at Venice: not 40 days after exposure to symptoms: 40 days without symptoms, to see if anybody developed symptoms

Keep the political pot-shots out of this forum, please.

I would think that the abscence of jet aircraft trouble would slow infection rates. Folks would become ill on the long ship voyage, and not allowed to land.

Since the influenza virus was not identified until the 1930s, Covid-19 would probably have been grouped in with the Spanish flu and other earlier pandemic flu strains as just another variant of a single loosely-defined entity based on having a range of similarish symptoms and high mortality.

Actually there’s some serious and compelling speculation that the “Russian Flu” of 1889-1892 was actually a coronavirus outbreak similar to COVID-19. So we have a pretty good idea of how it would be treated- it’s not like there was some kind of dramatic change in medical procedure or knowledge in the intervening 25 or so years.

Taking pandemic sequelae seriously: from the Russian influenza to COVID-19 long-haulers - The Lancet

Did a coronavirus cause the pandemic that killed Queen Victoria’s heir? | Coronavirus | The Guardian

Noted and will do.

The Spanish flu was spread largely through troop movements. No reason to think covid couldn’t have done the same. The main hitch being military age men aren’t as at risk to covid.

Another mitigating factor would be, we really didn’t have the same system of long term care homes like we do now. Those were a prime covid killing ground less available in 1918.

Well, it might just be a less lethal disease. It certainly has a different profile, as it mostly kills the old, whereas the 1918 pandemic flu mostly killed young adults.

I wonder how this would’ve changed the lethality. On one hand Covid mostly kills people over the age of 75 and we now have a whole lot more people living that old compared to the demographics in 1918. But on the other hand, modern medicine seems to keep us healthier longer than in 1918 so maybe people less elderly then would be more susceptible to Covid related deaths than now.

But crassly, deaths of healthy young adults hurt a society more than deaths of the elderly, be they 75+ or 65+ in a society where people become “elderly” earlier.

In other contexts its pretty clear that older people at that time remained active and maintained social status and networks until they died - there wasn’t all that much concept of a retirement, just shifting gears to match fading capability. That meant they were much more integrated into the structure of active society rather than being forgotten. That would suggest impact of their deaths is relatively bigger.

On the other hand (just looked this up) diabetes, as one covid risk factor is ~8 time more prevalent now than in 1958, so maybe fewer oldies were susceptible or likely to be hit badly without recovery. But no shortage of fat people in silent movies, and they are already all getting pied or kicked up the backside, so much more vulnerable.

Those men who had been gassed or gotten other respiratory / chest infections in the trenches were possibly at higher risk.