I can't figure out how these daredevils keep from falling.

I can’t figure out how these people are still alive. Hanging in the air with only one hand? Or the guy hanging between two beams with his arms wide apart. There’s no way he could pull himself up from that position. He’d have to turn and get both hands on one beam and then pull himself up and over.

Heck just getting into those positions without slipping and falling is beyond most people’s abilities. Then to pull yourself up and get a leg over? :eek: There’s no way in hell I was ever that strong. I could do ten pull ups in college, but holding myself and swinging up a leg would have been impossible for me. 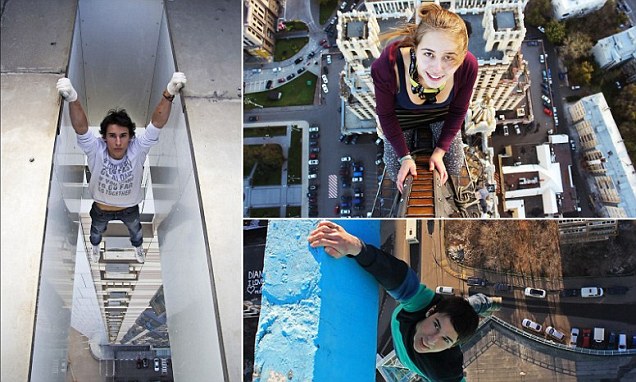 This striking series of photos show ‘rooftopper’ Kirill Oreshkin at the top of buildings, cranes, and construction sites – standing or even dangling from the top.

Are people that do this stuff basically bored and suicidal? They really don’t care if they live another day or not?

I’ve seen other photos where people climbed up high and thats pretty cool. But to dangle like that in midair using only one hand? Thats just freaking insane.

Climbing was never my thing. 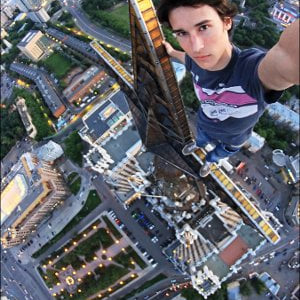 urban explorer https://www.instagram.com/kirill_oreshkin_official/ vk.com/kirill_opex matJ783@yandex.ru - you can write on this email if you want to buy photo

I have a picture of my granddad walking the beam at the top of an oil well derek. He was never bothered by heights. I’m not either in normal situations. I did roofing work and general construction labor every summer to pay for college. But that extreme climbing isn’t for me.

Thanks a ton - now it will take all weekend to get my sphincters unclenched.

There are people who can really do that stuff well, they are very confident in their abilities and it just doesn’t bother them much to be up that high. And I’m sure that there are some bored idiots who can do a few chin-ups so they go do it hanging from a crane or building ledge. I don’t know which category your guys fall into (ha ha).

It wasn’t just the height. I couldn’t pull myself up from those positions if I was only six feet from the ground.

It’s flat out physically impossible for me to do it.

I nearly snapped an ankle ten years ago. I was trimming limbs and the ladder slipped out from under me. Luckily I grabbed a limb and hung there a minute before dropping to the ground. I twisted my ankle pretty bad and the doctor had it taped up for weeks.

Okay, now my palms are sweating.

I’ve seen high-climbing pics like these before…and , just like the pics in the OP’s links, the daredevils all had one thing in common: they appear to be about 18 or 19 years old.

I wonder how many of them never made it to 21 ?

As someone said on another site, there is a 100% mortality rate for people who do this for any length of time.

Who says they have to pull themselves up? Someone is taking the photograph (at least in some of the pictures, some are probably “selfies”), they can help the guy up afterwards.

Not that that diminishes the feat. I get dizzy just looking at some of the pics.

I can barely climb a 20 foot ladder without getting vertigo.

They must have some shared genes with those mountain goats (or sheep) that stand on the near-vertical face of a dam.

As someone said on another site, there is a 100% mortality rate for people who do this for any length of time.

Also for everyone else.

Also for everyone else.

OK. What does it have to do with mine?

I can’t figure out how these daredevils keep from falling.

So just curious… do they ever fall?

I’m sure these urban climbers must fall occasionally. It just doesn’t make the news like base jumpers. I see an article at least once or twice a year about a dead base jumper. There was one just a few weeks ago. 2014 got off to an early start.

The best known urban climber is that French guy Alain Robert they call Spiderman. He’s a legitimate rock and building climber. I haven’t seen him doing the crazy stunts like those Russian teens.

I can barely climb a 20 foot ladder without getting vertigo.

I get nauseated on deep pile carpet.

OK. What does it have to do with mine?

uh…what I meant was that, yeah. like you said…there is a 100% mortality rate for everybody…
But for these daredevils, it apparently happens around age 18-21.

I get a cramp in my fingers if I have to sign my name…somehow that doesn’t bode well for me to hang from tall buildings using my fingertips.