Second parenthetical was supposed to say “when SLTS charted”…

I was already 27 by then, only a couple years older than Cobain himself, but though I was into several other Seattle grunge bands, and I could appreciate the music of Nirvana on a certain remote level— it never really did anything for me. It seemed like angsty music for angsty teenagers. I was an angsty young(ish) adult.

I was in my early thirties, with teen aged kids who would drag home various new bands and I was mostly “meh” about it (son was an aficionado of Cannibal Corpse and those damned t-shirts were enough to gag a maggot) but when grunge came around I got interested because the musical style had a lot in common with the kind of music I liked during my prime music acquisition years. SLTS was then and still is a song I will always listen to and enjoy. It’s just a damned good song.

If you’ve never watched a Rick Beato video deconstructing what makes a song great, the episode for SLTS is quite illuminating. Check it: 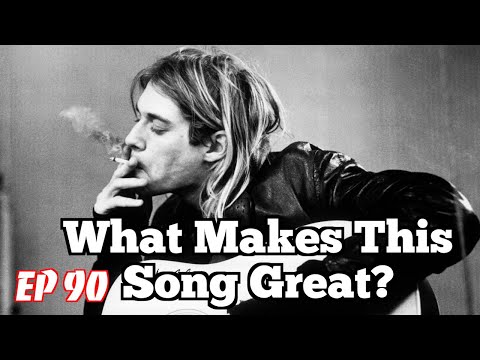 I hated it. I only find it tolerable now because it’s not as bad as the dreck that came after. Actually, that’s right about the time I quit listening to new music.

I was in my late 20s, and I remember that I was so excited about it that I told my friends about it. And I did end up buying a lot of grunge for a while, but not much stuck with me.

Yeah, like Louie Louie, Twist and Shout, that kind of stuff.

Yeah, like Louie Louie, Twist and Shout, that kind of stuff…

The song was pretty huge for me. I was in college, and up to that point, I was pretty much all-classic-rock-all-the-time. I just didn’t give modern music a chance. Smells Like Teen Spirit (and all of Nevermind) blew me away, and really opened me up to a whole new world of music. I still listened to classic rock, but overall, I don’t think it’s an exaggeration to say that it changed my entire musical taste.

Even if yon think Nirvana is a “poorly mixed garage band” (I don’t), it led the way for “better mixed” garage bands to change the path of rock.

The music that I really disliked through the 80s was a particular style that had its fans, but really grated on my ears. Then Grunge began and it sounded just like that terrible cacophony I had heard for years, and so a) I didn’t understand why it was being considered a “new” sound, and b) it remained horrible, and I was stunned to see it rise in popularity.

My opinion has not changed since.

Anyway, sorry to be so negative in a thread that is clearly for its fans. I will go away now.

As the OP, not really. My Carpenters thread was more for fans, this is just a ‘this day in history, what did it mean to you’ thread.

I was 23 when it came out. I didn’t like it. I loved The Ramones, but Nirvana was just too noisy and “brain dead” sounding for me.

A couple years ago our (then) 16 year old son discovered Nirvana. Bought all of their albums and played them nonstop. I thought that was funny. (And I still don’t like them.)

If I want to hear early 90s music that has some grunge in it, I’ll put on The Breeders. I think they’re so much better than other grunge bands.

I was 17 when Sex Pistols released their Never Mind the Bollocks. I was living poorly mixed carage bands in my youth. Why would my taste change when I’m 30?

I would’ve been 6-7 when it came out, and wasn’t really aware of Nirvana until I was 9 or so. The song still seemed popular and relevant at that time and everyone in school knew it. I remember his suicide was seen as a big deal even among a lot of us kids. I liked his songs, but given my age this one is just another one of the many popular songs which predate my awareness of music.

One of the stories I read about the title of the song was that Cobain got it from a friend who wrote “Kurt smells like teen spirit” on the wall. He thought it was a nifty phrase and didn’t realize it was literally saying “Kurt smells like Teen Spirit™” [brand of deodorant].

One of the stories I read about the title of the song was that Cobain got it from a friend who wrote “Kurt smells like teen spirit” on the wall.

I think I was a senior in HS, and it was definitely something different. I liked Nirvana but I never got into them as much as some of my old buddies did. For whatever reason I was into Alice in Chains, not that they were particularly great themselves but…fickle, fleeting interests of a high school kid and all that. I may be off but I felt like bands of that time were really putting their own spin on groups like Metallica and a few notables of the day, including some punkish acts. I recall Beastie Boys came out with an entirely new sound, sort of a twist on their earlier rap stuff.

I would have been around 10. I didn’t listen to any new music at all then, and probably didn’t know anything about Nirvana the band until Kurt killed himself. In the time since then, I’ve come to appreciate the song, though not the particular recording of it we’re talking about. I don’t particularly like the style of music all that much, but the song can be played in other styles, and I’ve thoroughly enjoyed the covers by 2 Cellos and David Garrett. The Paul Anka cover is also interesting, but I don’t particularly like his music either.

I was 21 when it came out and working at BestBuy at the time so was always aware of what the newest popular stuff was selling. There was such a variety of popular stuff at that time; U2, REM, Garth Brooks, RedHotChiliPeppers, GunsNRoses, CypressHill, SmashingPumpkins, NineInchNails,etc. that it just seemed like another niche popular album among alot of other stuff on the hot hits wall.
It wasn’t my thing and I never really thought there anything groundbreaking about it since there was always new bands with new sounds trying to be groundbreaking.
I never understood the “It was so different from everything else at the time” argument since everything back then sounded different from everything else.

Nirvana and grunge its self never did much for me I liked some of it. like the gin blossoms cranberries type of stuff …But I was more into punk and British EDM like the pet shop boys with LA gangsta rap tossed in for flavor … when MTV announced early one morning that Cobain was dead I had 3 reactions was 1 damn that sucks didn’t he just get married and have a kid? 2 I groaned and realized MTV was going to be useless the rest if the day and 3 the fad was almost over…

And then proceed to be useless forever…