And then proceed to be useless forever…

I want my MTV!

I hated it. I only find it tolerable now because it’s not as bad as the dreck that came after. Actually, that’s right about the time I quit listening to new music.

For me it had exactly the opposite effect. That’s when my musical tastes finally caught up with the times. I was a junior in high school and my freshman year I was into 50s and 60s music; sophomore year I discovered classic rock, and then junior year was when I skipped over the 80s and went straight to alternative rock, largely thanks for Nirvana. After a couple years of that, I finally worked back in the catalog, exploring the 80s (Pixies, Sonic Youth, Pere Ubu, etc.) and 70s punk and post punk that I had missed from the classic rock days, while still listening to the alternative rock of the time (Smashing Pumpkins and Sleater-Kinney leaving the biggest musical impressions on me in the 90s. Oh, and My Bloody Valentine, but they were just early in the 90s before the came back with a new album in the mid-2000s).

Therefore, “Smells Like Teen Spirit” was the catalyst for me to catch up with the times AND discover all this wonderful, rich history of alternative rock music that had previously been off my radar. It’s not close to being my favorite Nirvana song, but it was the spark I needed.

Much of what @pulykamell writes also applies to me. I was 23 when Nirvana broke, and was raised on classic rock. T. Rex had been my first musical love, then Suzie Quatro and other glam acts, then I had a Beatles phase, then came 70s punk rock and new wave, and in the eighties I got a little bit lost in current music, because guitar rock mostly became replaced in the radio by synth acts, and I didn’t like most of those acts back then, with the exceptions of Depeche Mode, Talk Talk and the Eurythmics. My favorite bands of the 80s were the Smiths and the Cure. But somehow I totally missed American underground and hardcore (because they didn’t exist on German radio), and only Nirvana and the massive break of indie and alternative music that followed let me explore bands like Hüsker Dü, the Pixies, the Minutemen, Dinosaur Jr and countless others. It felt great that punk and guitar rock broke again in 1991, and the first half of the nineties are my best memories, chartwise and concertwise. Heck, even MTV became watchable for about 5 years!

I was 18 when Nevermind came out, putting me at practically the perfect age to be totally swept away by grunge. But while I enjoy the big singles, I can’t say I connected very deeply with the genre as a whole. It might have just been that it became SUCH a big scene SO fast.

OK, I’m going to play my Insufferable Hipster card here. I don’t have many in my deck so please indulge me.

As a teen in the underground punk scene in the Northwest, I had probably seen Nirvana a dozen times before any of you had heard of them…well, more accurately, I had probably blown off a dozen Nirvana sets to drink beer with my friends while waiting for the band we’d actually come to see. We didn’t think they were anything special (our tastes ran toward more straightforward hardcore punk like DKs or Black Flag), and were bemused when they suddenly became huge.

At the time, it was my duty as a hipster to say they sucked, but in retrospect SLTS is a really solid rock song and I’m not surprised it has endured this long. Maybe I should give the rest of their catalog a re-evaluation sometime.

(On a somewhat related note, I recently heard Soundgarden’s Badmotorfinger (1991), which I remembered as being OK but unmemorable. On further review, it just plain sucked.)

Of course it’s a great pop song: the chord progression in SLTS is the same as Boston’s More Than a Feeling. 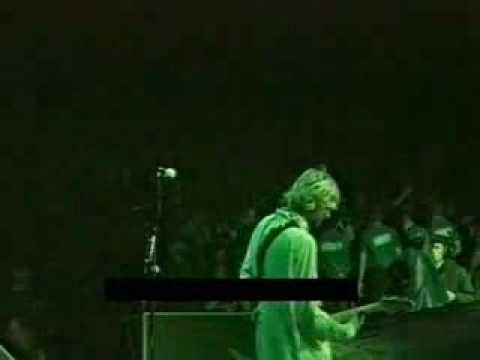 Of course it’s a great pop song: the chord progression in SLTS is the same as Boston’s More Than a Feeling .

I assum you’re being facetious, with the video, but I keep hearing this come up time and time again in a serious manner, and it’s not really true. I do understand Kurt was inspired by it and he made some off-hand comment about them being the same song, but they’re not. It has a similar rhythm, but the progression is quite different. More than a Feeling is G - C - Em -D, or I-IV-VI-V using Roman numeral notation. Smells Like Teen Spirit is Fm, Bb, Ab, Db, or if we put it into the same key as More Than A Feeling, the chords would be Gm - C - Bb - Eb, or i - IV - bIII - bIV. (The first chord the minor tonality is implied, as it’s usually played as a power chord without the third. But if you want to put a third in it, the minor one is the only one that really fits.) So, yeah, not really the same chord progression at all, with either half or three quarters of the chords different (depending on how you want to parse that first chord.)