I Had An Absinthe Martini Last Night

I had an Absinthe Martini last night. A couple of things I love about that photo. I had it in the candle holder that they used as a bar glass, in Star Trek: the Next Generation (1987-94). I’m sure my glass wasn’t literally one of the ones they used (but you never know

). I got it off Ebay IAE, because I always wanted it. I think it looks neat, if you ask me.

Now, this is Cafe Society. So I have to ask you all. Has anyone else ever had an Absinthe Martini? Or for that matter, does anyone here even know how to make one? They are quite unique, I think at least.

Now, if I could just find out how to post pictures on threads on these message boards. But don’t get me started on that, because that is a different matter entirely, I guess

You asked how to post pictures here, and were told many many times how to do it. 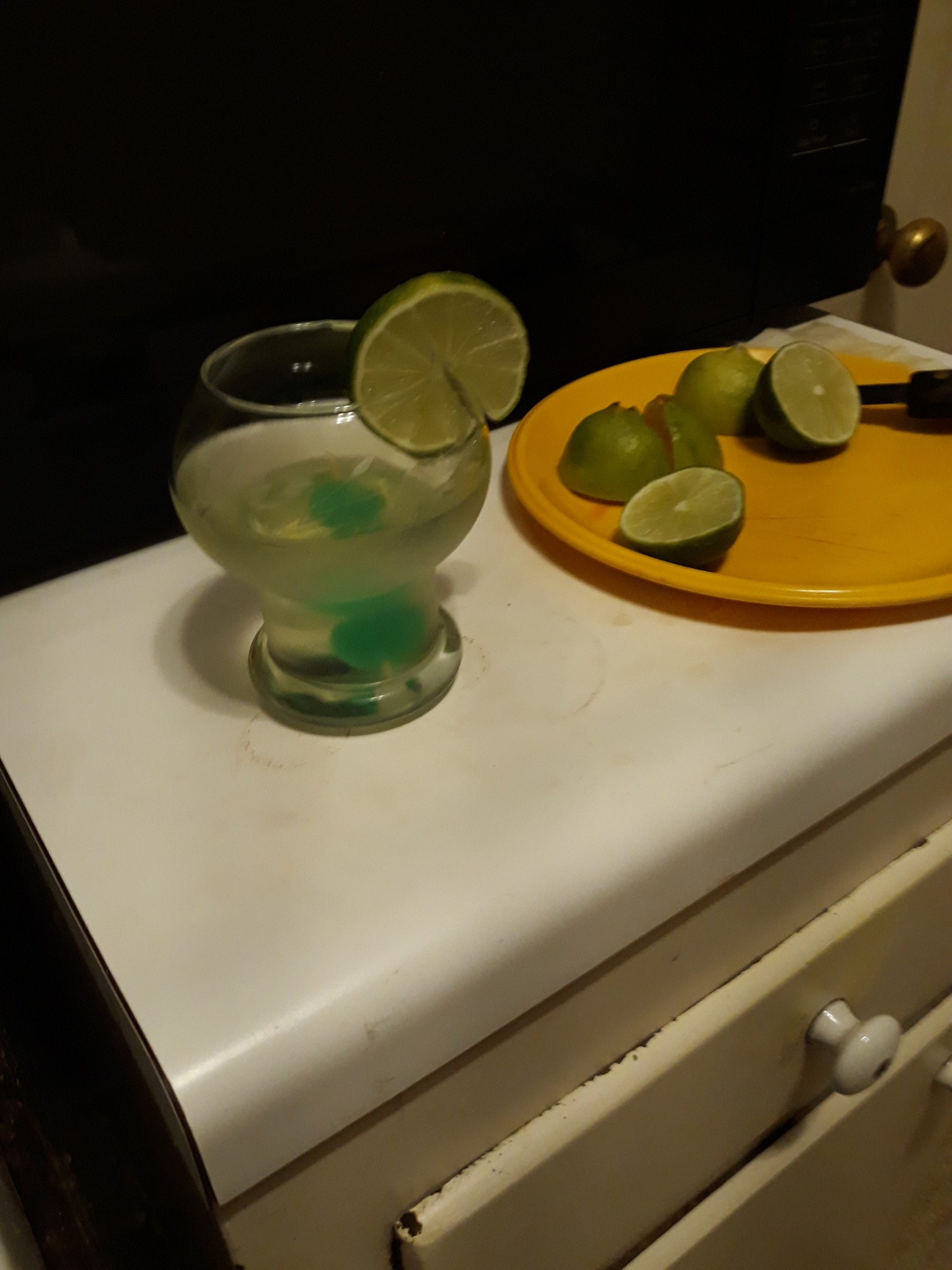 One of the side effects of absinthe.

Must just be gin, vermouth and a splash of absinthe no? I’ve never been a fan of martini cocktails but perhaps the absinthe adds some life to it.

Weird that yours has lime with it rather than an olive. Does the absinthe really change it into that sort of drink?

@Fiendish_Astronaut Bingo! (that’s how you make it).

Actually, I use lime, because I am going for a green motif here. Partly because Absinthe is green. That is in itself ironic, because as you can even plainly see in my pic, Absinthe turns milky when mixed with cold water.

The green cherry (that’s what that was, if you didn’t notice

), is simply because that is the only other thing I can find that is green.

How much absinthe did you use?

@Fiendish_Astronaut Well, I used to literally just use a couple drops, which is sufficient. For those of you who never tried it, Absinthe overpowers whatever you put it in, in flavor at least. Now, I go truly wild. I put a half of an ounce in it. That’s all I can afford too. I don’t know about where you live. But here, it’s ridiculously expensive.

I’ve never been a fan of martini cocktails but perhaps the absinthe adds some life to it.

They do say absinthe makes the heart grow fonder.

I don’t know about where you live. But here, it’s ridiculously expensive.

I’m in London - it’s not too expensive here. Maybe from £30 which is about

Can’t believe how much sterling has crashed recently!

I can’t stand the taste of absinthe, so I’ll pass on the martini, but I do applaud creativity.

I once bought a bottle of absinthe which came with a flat metal thing which looked like a cheese grater. I think you were supposed to put that over the glass, add a sugar cube and set it aflame. More dramatic than delicious, but high points for authenticity?

Flame? The sugar dissolves as cold water is poured into the absinthe.

I used to drink Pernod sweetened with Barenjager honey liqueur. But I liked the bitterness and switched to Pernod & tonic.

They do say absinthe makes the heart grow fonder.

The punchline I heard was, “Absinthe makes the fart go honda,” but I’m too lazy to reconstruct the joke.

The flame thing is a Czech presentation, as far as I know. French just uses water and sugar.

I am sure others have made their own concoction with this name, or called the drink something else, but I take rye and sweet vermouth, add absinthe, and call it The Absinthe-Minded Professor

The actual martini is gin, dry vermouth, and orange bitters. Some people make them with vodka, which is technically a “Kangaroo”, but nobody actually calls them that, they just call them vodka martinis. And modern ones tend to have very little vermouth, and often no bitters- they’re called “extra dry”.

Personally I don’t care for them, but clearly someone does because they’ve stayed popular for more than a century.

According to Difford’s Guide, an absinthe martini is a martini with absinthe substituted for the bitters.

I loved that stuff. Do they still make it?

Loving this thread. Kropotkin, what proportions are you liking?

Would a combo Long Island ice tea/Manhattan made with it be an Absinthe Tea Landlord?