I have officially lost all tolerance for country music.

Spoiler alert: If you are a fan of country music, you’ll probably get really p***ed off at me.

So I was driving back from Dallas to Wisconsin with my parents after visiting family, and we’re driving straight through like we always seem to do. I take the wheel on the last leg of the trip, through the worst weather, thinking they’ll get some shuteye. But they don’t. They love country music, to the point where they won’t ever listen to anything else and need to have it on all the time. Normally I’m not one to make a fuss about it, because everyone else in the family (besides me) loves it too, and I don’t listen to it when I’m by myself. So let them have their choice in music, I’m a nice guy. (Or maybe I’m just a huge (rhymes with wussy).)

But we’re driving through Illinois, they’re changing to the next country station every time the current one even begins to fade. They have it up loud. And there’s this one new song coming up about once an hour. “I Love Country Music?” “This Is Country Music?” I don’t know, I don’t care, and I wouldn’t get caught dead Googling it. It’s the one that starts out with how you’re not supposed to say anything about cancer, Jesus, etc.

The thing that gets me about this song (and really a lot of these songs over the past 10-15 years) is how these country people are making themselves to be so freakin’ superior because they’re country, and trying to lay a guilt trip on anyone who isn’t that way. I mean, I’m a decent guy. I think cancer is tragic and I wouldn’t wish it on anyone, but it’s not the only bad thing in the world that needs to be addressed. I’m Catholic, and I’m very serious about my faith, but I’m also fairly private about it and realize I can’t press it on everyone. I believe in free will. And don’t even get me started on the part where the guy gets killed in battle and the mother’s crying about it on the phone (complete with cadence - I can’t stand when songs use that).

I mean, I grew up in the early 80s when the outlaw stuff was still pretty widespread. They knew they were country but at least they had a sense of humor - fairly dark at times - about it (see David Allan Coe’s “You Never Even Called Me By My Name”, prime example). But country now is so sanctimonious towards non-country fans and so relentless about shaming even decent people into becoming more like them that it’s just become unbearable. I withstood it my entire life because other people chose the station on the radio first, and they were driving or they were working in the room. But I was driving, and I had to listen to this stuff nonstop, and that’s what broke my tolerance. I can’t stand it, and I will never listen to it again. I will turn it off if I walk into a room and people are playing it, and I don’t care how they react.

Rant over. Thank you for letting me get this off my chest.

I like a lot of country music, though not a lot of the popular new stuff. Alt and outlaw and classic country are fine.

Country radio is horrendous. I have heard that it is primarily programmed for middle-aged women. Think of the harpies in Office Space, and ask yourself whether you’d want to listen to their station.

Why do you hate America?

Country radio is like Top 40 radio. Complete shite. I’m firmly convinced that a lot of bands label themself as country when they are really just soft pop rock (pap rock? crap rock? wuss rock?) because they realize it’s easier to chart on the country chart than the main top 40 one. And they dream of becoming “crossover” hits. yes, Rasscal Flatts, I’m looking at you (and wanting to puke as I do it).

But there is still good country out there. It’s also a genre that really is much better live than recorded. I’ll just sit here and clutch my Robert Earl Keen, Dolly Parton and John Prine tickets to my chest.

Why do you hate America?

There’s a difference between redneck/down-home, and white trash, and a lot of “country” tends to glorify the latter, much to my chagrin, being a rather redneck-friendly sort.

This new “country pride” business seems to be the natural outgrowth of it- not only are they singing about this stuff, but they’re being condescending and snooty toward those of us who aren’t that way. (which seems a little ironic).

I like a lot of country music, though not a lot of the popular new stuff. Alt and outlaw and classic country are fine.

Country radio is horrendous. I have heard that it is primarily programmed for middle-aged women. Think of the harpies in Office Space, and ask yourself whether you’d want to listen to their station.

But I would hate to be stuck listening what Nashville is putting out nowadays.

(which seems a little ironic).

It’s like rain on the 6 month anniversary of when they accidentally started making out under the bleachers at the monster truck show.

Everytime I encounter contemporary Country, I am disgusted. Of course, I think all genres of music went to shit sometime in the 70’s. Even some of the ways that country music was once delightfully corny, precious and desperately insecure that you might not get the point don’t seem to work now, or perhaps they just don’t have the talent behind it they used to. Just from the title, I can well guess what to expect from Daddy, Please Don’t Get Drunk this Christmas. But I suspect that a songwriter from fifty years ago could have made even this grotesque heavy-handedness more touching than vomit-inducing.

I recall how several years ago, despite the fact that the soundtrack to O, Brother, Where Art Thou had become the best-selling country album, it couldn’t get play on country stations. Johnny Cash’s heart-breaking American series of albums also couldn’t get play. It seems that the Nashville scene is mostly interested in twangy pop, and is content to let the real country music rot.

I don’t keep up with developments, but it doesn’t surprise me to hear that the genre has now stagnated to bragging about how “country” one is. Rap, whose fringes are alive with fresh sounds and credible heart-felt poetry, mostly makes money from selling a fantasy of “street”-ness. It’s not like music is only now being homogenized and target-marketed, but the same shit has been run through the same mill so many times that the only thing left to sell is the fantasy of being the sort of person who would like it.

But the archives are filled with the good old stuff you can’t get on the radio anymore. And with the advent of the MP3 player, you never need rely on the Nashville mafia for the sounds. Put out the word – don’t have to listen to broke-dick caterwauling designed to reassure insecure redneck wannabes.

I say you should turn on George Jones or Waylon Jennings.

Alternatively, you could switch on Steve Earle or Drive-by Truckers or Patsy Cline.

OK, now I’ve lost all tolerance for country music. (Well, at least country radio. Johnny Cash was a country icon before most program directors working today were born, and his efforts to make intelligent, relevant recordings so deep into his career merits some damn respect.)

Every year, for ten days in July, I’m forced to listen to country music wherever I turn in this city, due to the fucking Calgary Stampede and all its trappings. By the end of that week I’ve pretty much had my fill of country for another year. Anything more twangy than The Eagles quickly starts to grate on my nerves outside of that period.

I’ve tried to like country music, but there are a few things I can’t get past.

1 - And I fully admit this is an irrational prejudice on my part that I strive to overcome … southern accents generally grate on me.

B - The lyrics usually range from boring as all hell, to glurgy jingoism. I was listening to one the other day and the lyrics were something like, “I looked at my baby boy sleeping, and kissed my wife goodnight before I turned the TV on and had a beer and yada yada yada …” and I was thinking … who gives a shit. Now it’s not like I need deeply profound lyrics to enjoy a song, but at least make it snappy. When Springsteen talks about working on his car I at least enjoy the minor word play and the melody.

And lasty – I cannot stand the sound a peddle steel guitar makes.

I have a friend who populates his Facebook status every few days with lines from whatever happens to be his current favorite “I love America, my family, workin’ hard, and drinkin’ beer in my small southern town” song. You know, the one by that country guy who sounds exactly like all those other country guys?

I don’t get the appeal.

Apparently not. I wasn’t listening to country stations at the time, but Cash took out a now-infamous ad in Billboard that tells the story.

I say you should turn on George Jones or Waylon Jennings.

Alternatively, you could switch on Steve Earle or Drive-by Truckers or Patsy Cline.

Or get one of those portable Sirius/XM players, pop in the ear buds and listen to Willie’s World, or Outlaw Country all day.

ETA: Or John Hiatt, or Lucinda Williams. Or Roseann Cash.

After ‘Unchained’ won the Grammy for Best Country Album, his label took out the following ad in Billboard: “American Recordings and Johnny Cash would like to acknowledge the Nashville music establishment and country radio for your support.” With a photo of Cash flipping the bird at the camera. 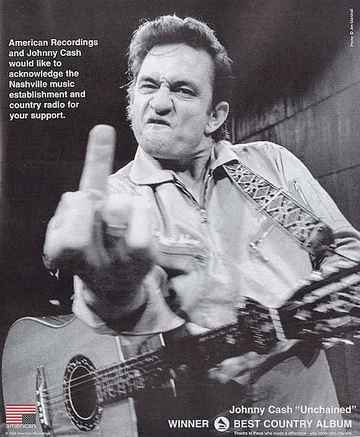 I should go ahead and say that there are people working out there doing what I would regard as real-ass country music. I don’t like it as well as older stuff, but they should get some credit: John Prine (as mentioned previously), Alison Krause, Max Stalling, ect. I suspect that if I actually watched Austin City Limits I’d find that I liked the kinds of acts they present there, but it could be a trap to lure me in.

If you like female country singers, I’ll put an absolutely shameless plug in for an old friend of mine, Libby Koch. Completely unrelated to the incredible rich funders of the Republican Party, to the best of my knowledge.