This is my latest sci-fi model. I finished it a month or two ago, but we had a series of home-related repairs that distracted me from sharing it here.

The little sci-fi model club I belong to is having a challenge: “Build a land or water vehicle propelled by a reaction engine (but not an airplane or spaceship)”, simplified for sanity’s sake to Jet Car Challenge. This is my entry, Ice Cruiser Norlandia.

It started out as a submarine hull, part of an estate purchased by my local hobby shop, with an inch spliced into its height, and jet engines from a Hustler bolted on:

I took it to a model exhibition, and every person who saw it at my table asked, “Submarine?” Um, no. So I resolved to make it look less submarine-y. I cut off the conning tower and slid it waaaaay aft, then built a bridge from sheet styrene: It needed suspension, so I built some. The springs are styrene rod wrapped around a screw, then dunked in boiling water: 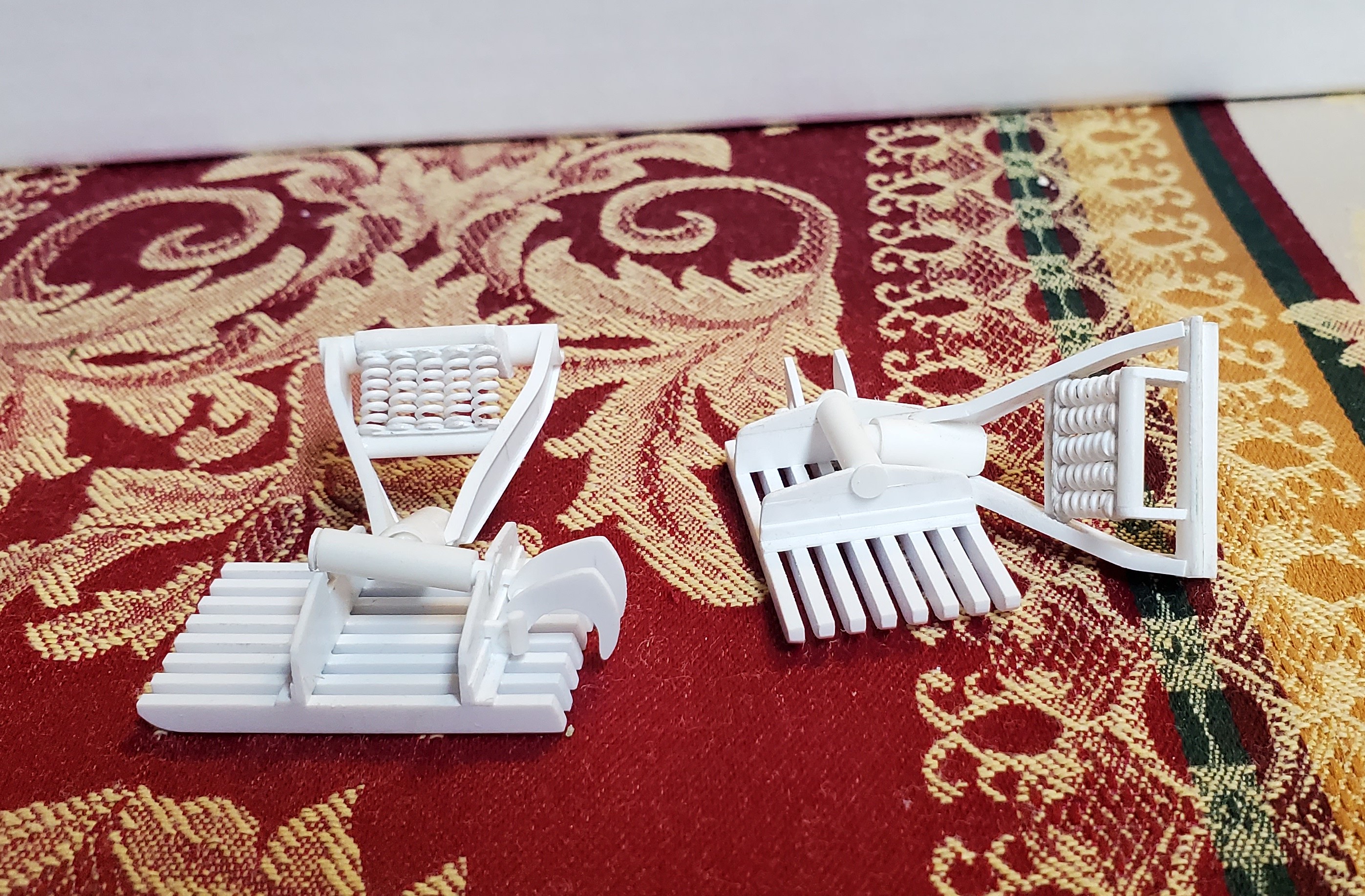 Some wise guy on a model message board thought it needed a way to stop, so I built some thrust reversers from florist’s test tubes:

A friend with a mill helped me make a jig to drill tons of portholes:

I cast a resin copy of a bit of scrollwork I got from eBay, and before the resin was fully cured, I draped it over the nose:

I decided it needed a recreation deck, under glass; an eyeliner package provided the dome: 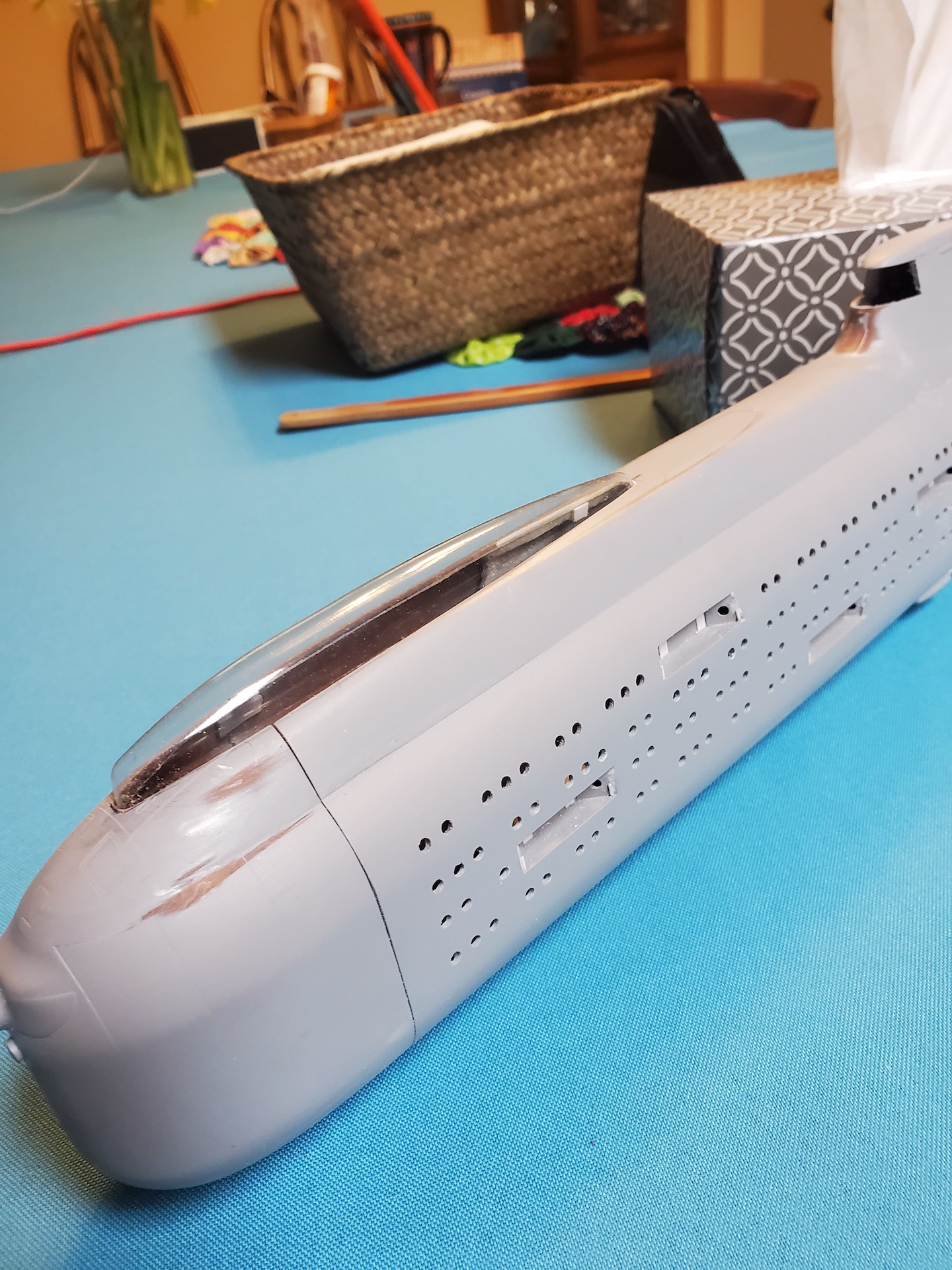 This slide-in box, filled with LEDs and later fitted with a diffuser, lights up the portholes: 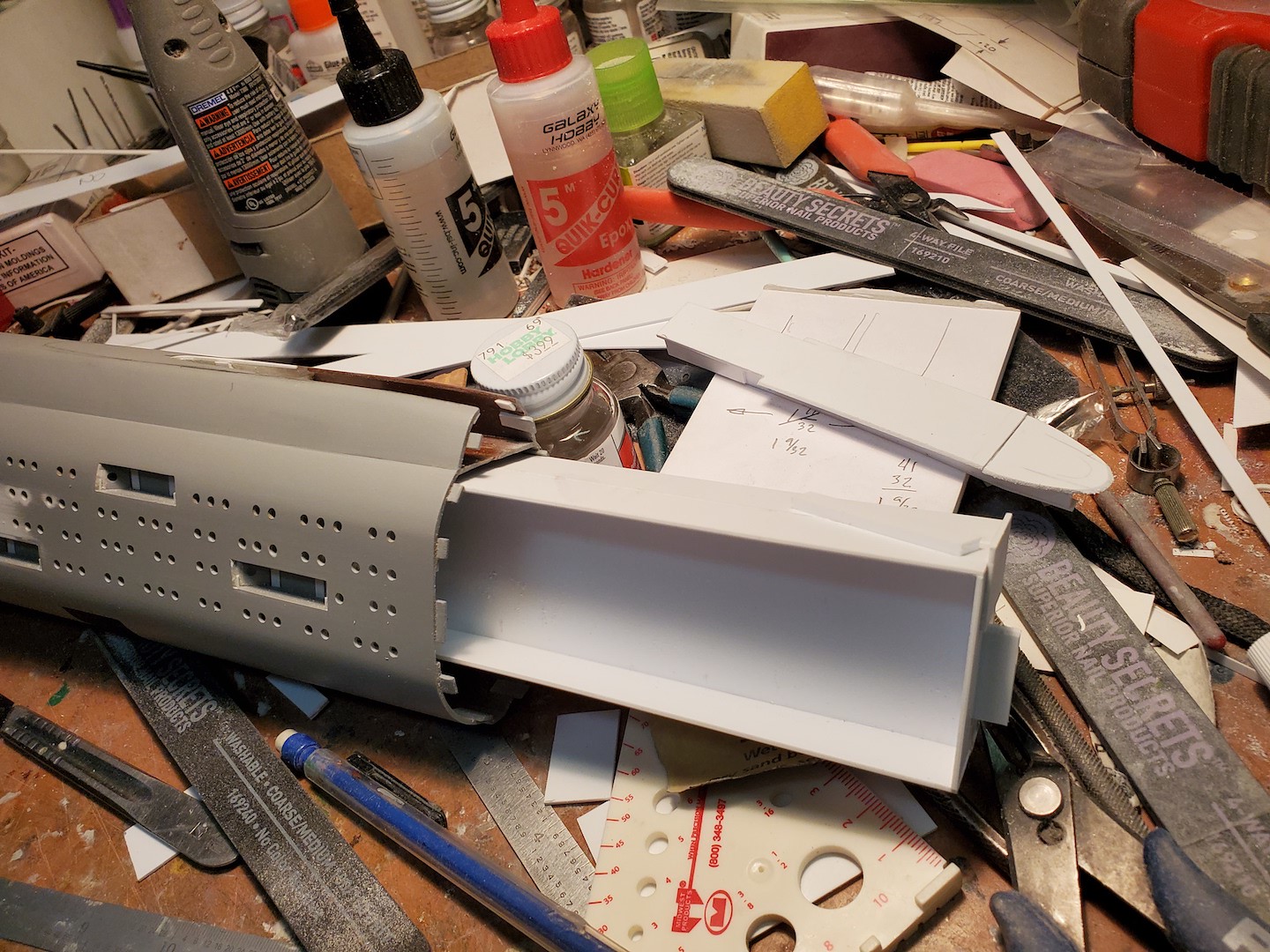 A base, plywood and foamcore and lots of drywall mud: 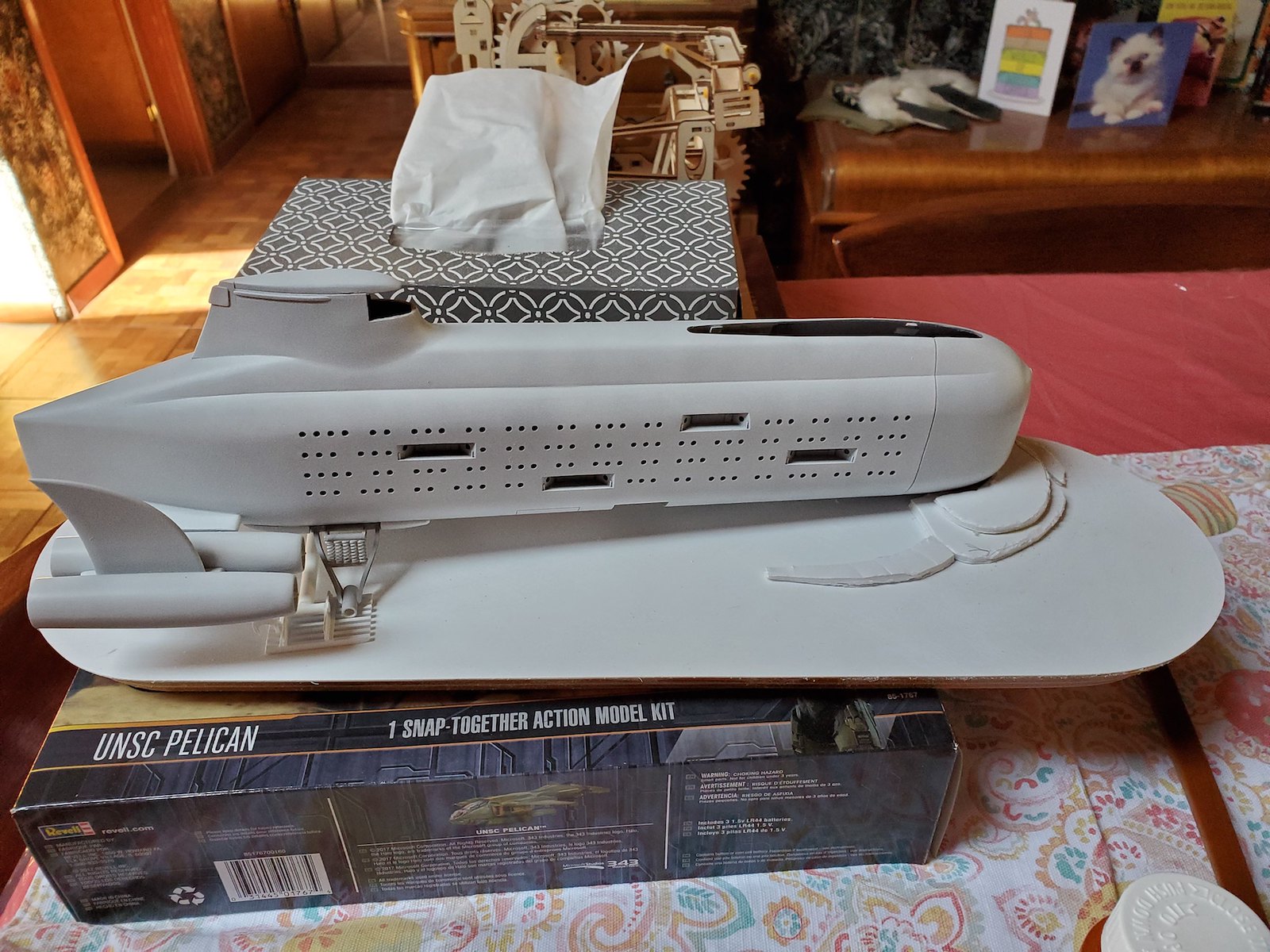 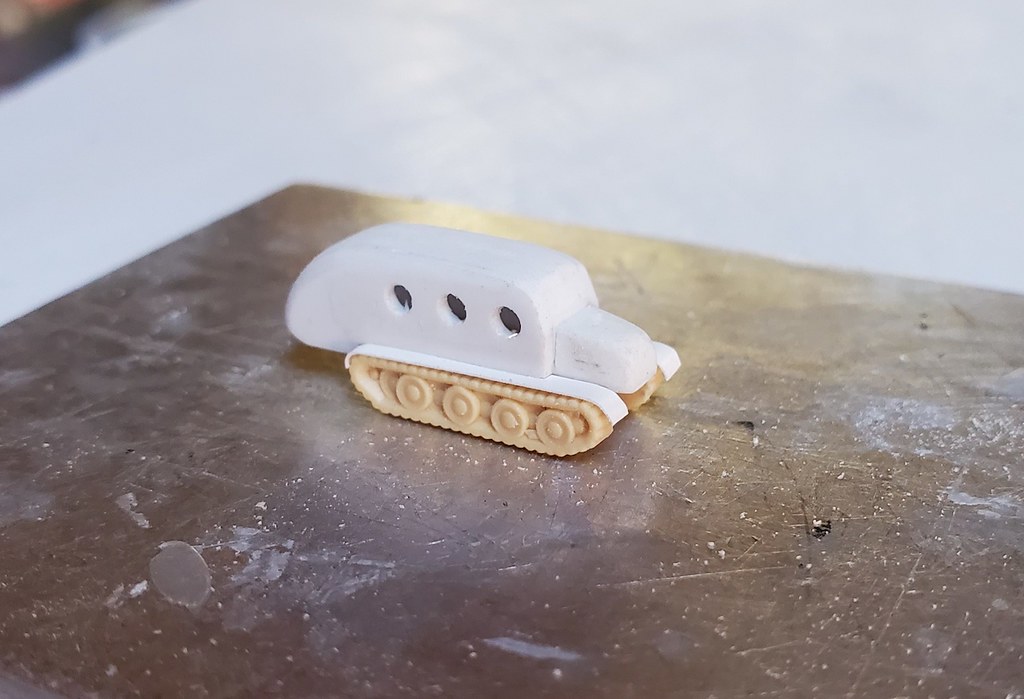 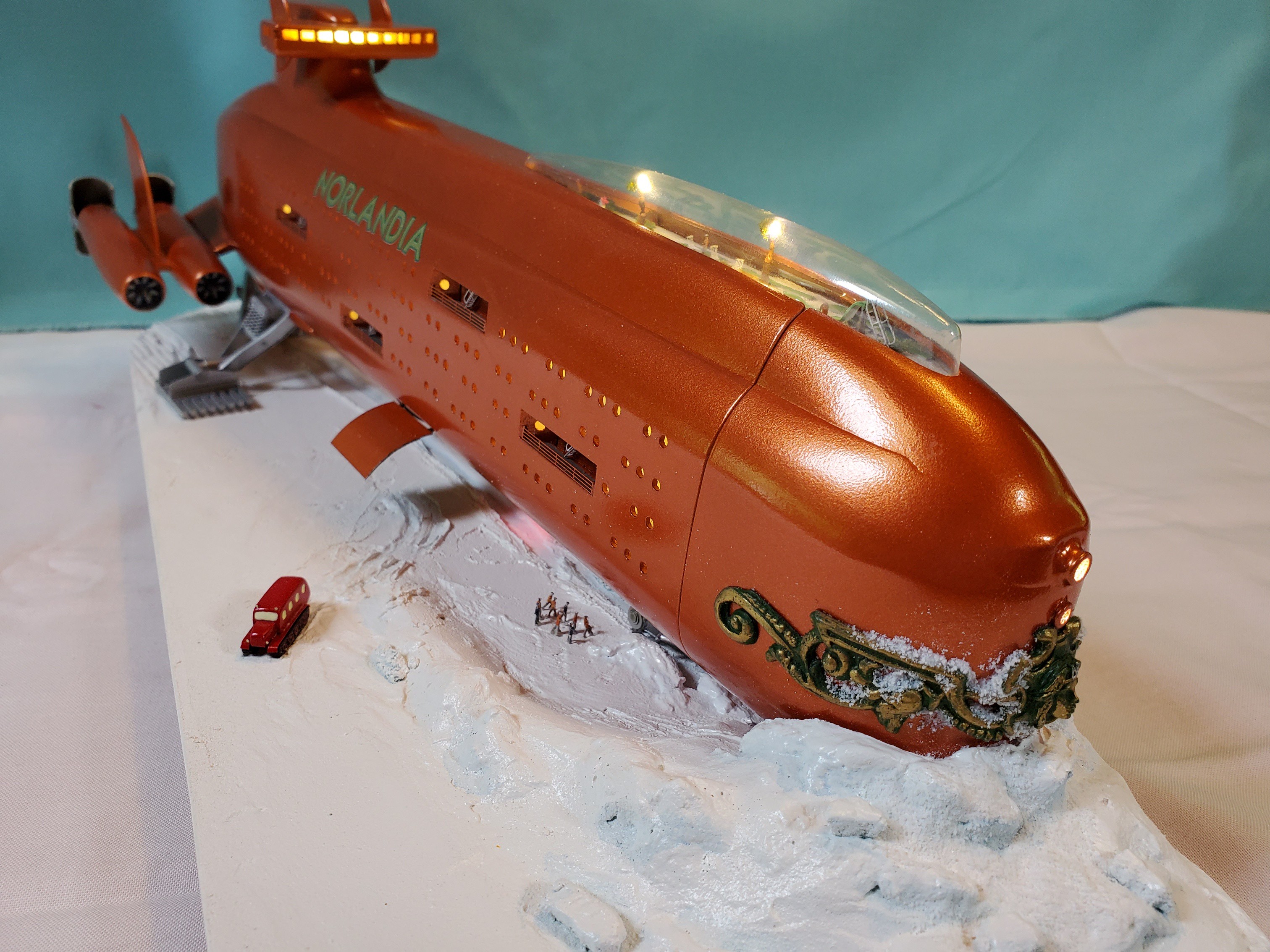 What paint did you use on the finished model?

Beautifully done. Your art/models blow me away.

What paint did you use on the finished model?..

After a disastrous first attempt with some acrylics I’d had good luck with before, I stripped it and used TamiyaTS-92 Metallic Orange spray paint, which went perfectly, as Tamiya paint always does.

This thread alone with its inline pictures was worth the board move to Discourse.

Thank you all for your kind comments!

Do you have a better view of the front skids/wheels/supports?

What was the front ski unit is now wadded up underneath the vehicle. In this picture, it’s visible at about the midpoint of the engine. Before the accident, it looked a lot like the aft ski units, but with provisions for steering. It was pretty nice; shame I didn’t take any pictures of it.

What a shame you had to waste time on a plumbing nightmare instead of building more models. It’s just so damn cool looking. Are you telling us there’s no little elves or a magical cricket helping you out at night? Your stuff seems way to good for mortal hands.

Really beautiful, thanks for sharing!

Wow, super impressive. I think I might have done the name a little differently; old ocean liners usually had it on both sides of the bow and on the stern.

Oh, who am I kidding? I’d be lucky to wind up with a stack of scrap plastic and probably get high from glue fumes. Deciding where to put the name would be the least of my worries.

Absolutely amazing. How did you do the paint? Is it layered to get that color effect?

Absolutely amazing. How did you do the paint? Is it layered to get that color effect?

The paint was easy, once I’d gotten the first failed paint job removed. I gave it a few coats of white primer, then just sprayed the orange straight out of the rattle can. Tamiya paints are really wonderful: They go on nicely, the spray nozzles always have a nice even pattern, and the paint dries quickly and hard.

I had about half a can left after painting Norlandia, so I built this little Beetle straight out of the box, just to use up the rest of the paint (you can see Norlandia on the shelf below):

Except for 1:72 airplanes & such when I was a kid or teen I’m no modeler. As I said up-thread I’m in awe of the workmanship & creativity.

A question if I may …

The 7th pic in the OP shows the half-installed lightbox you built for the interior. I’m amazed to see such a cluttered worktable and the model sitting on piles of sharp or abrasive tools. I’d think you’d end up scratching the hull too much. I know if I was working there I’d also be continually knocking stuff onto the floor.

Given that you do beautiful meticulous work, and your hobby is important to you, I’m surprised you don’t have a good sized & neatly organized work area. Or maybe you’re just more of an artist/mad scientist cross than a tweezer-equipped engineer?

More of a mad scientist type than a calm and methodical engineer.

I always start projects on a beautifully empty and uncluttered workbench and finish them in a clear work area about the size of a postcard.

You can see the progression in the series of pics I posted. I tend to get out materials and tools and leave them out, in case I need them again. Also adding to the clutter is the fact that often I have two or three projects all going at once. But once all the current projects are done, I tidy up the workbench and put away all the leftover materials, so I can start the next project with a clean slate.

As far as accidental damage goes, once the hull of a model is painted, I’m very careful with it; it spends its time either hanging from the ceiling beams, out of the way, or resting on a soft rag on my workbench. Painted bit parts live in plastic snap-top boxes until final assembly.

I recently saw pictures of the workroom of a guy I know slightly through Wonderfest. It was a room about 15 by 30, meticulously clean, with tidy workstations along the walls, each with its own lamp/magnifier. I was in awe.

Kinda Phallic, but only 'cause it makes me hard!

Dude! You are the MAN! That is awesome. I love your work. Your threads are my favorites!