If only there were something he could do to calm his nerves, and look suave doing it…

Sad that people died, but now I really want to read that police report. Especially the detail necessary for an “officer involved shooting” report. Australian feral camels are feral populations of dromedaries (Camelus dromedarius) in Australia. Imported from British India and Afghanistan during the 19th century for transport and construction during the colonisation of the central and western parts of Australia, many were released into the wild after motorised transport replaced the use of camels in the early 20th century, resulting in a fast-growing feral population. By 2008, it was [incorrectly] feared that Central Australia's feral cam...

By 2008, it was feared that Central Australia’s feral camel population had grown to about one million and was projected to double every 8 to 10 years. Camels are known to cause serious degradation of local environmental and cultural sites, particularly during dry conditions. An AU$19 million management program was funded in 2009, and, upon completion in 2013, the feral population was estimated to have been reduced to around 300,000.

The US had a Camel Corps.

The United States Camel Corps was a mid-19th-century experiment by the United States Army in using camels as pack animals in the Southwestern United States. While the camels proved to be hardy and well suited to travel through the region, the Army declined to adopt them for military use. The Civil War interfered with the experiment and it was eventually abandoned; the animals were sold at auction.

Speaking of the US Civil War, if you’re ever in Vicksburg:

Douglas The Camel, or “Old Douglas,” was a domesticated camel used by Company A of the 43rd Mississippi Infantry, part of the Confederate Army during the American Civil War. Because of Old Douglas, the 43rd Mississippi Infantry came to be known as the Camel Regiment. Douglas was not a veteran of the U.S. War Department program called the Texas Camel Experiment, which aimed to experiment with camels as a possible alternative to horses and mules, which were dying of dehydration in vast numbers. Th...

Though the men tried to treat Old Douglas like a horse, the camel was known to break free of any tether, and was eventually allowed to graze freely. Despite not being tied up, he never wandered far from the men. The Infantry’s horses feared Old Douglas, and he is recorded to have spooked one horse into starting a stampede, which reportedly injured many, and possibly killed one or two horses.[1]

I’ve ridden more camels than I have horses (OK, 2 camels to 1 horse.)

Both camels were trained and each one took our group on a trip into the desert - quite atmospheric.

Camels can kick at surprising angles - not just to the rear - and they can do so with lethal force. Here’s a US soldier getting a relatively mild love tap while approaching the camel from the side (kick @ 0:42): 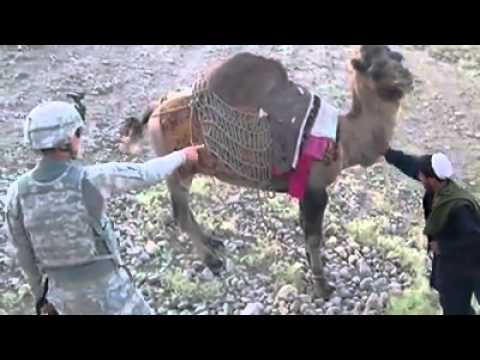 Ladies and gentlemen, the people defending your freedom!

They’re interviewing applicants for the vacant position at the petting zoo.

Maybe a couple of nice cassowaries for the children to cuddle with.

BTW, after putting the camel emoji in the subject line (my keyboard suggested it) I wondered what would happen if you did a Google search of one. It works! And I got to see Woke Luke Skywalker troll an asshole!

Just for some background, Camel Fighting has a long tradition in Turkey, Afghanistan and elsewhere in that region. They take advantage of male camels heightened aggression during mating season, bringing two males near each other and a female camel and let nature take it’s course… Camel wrestling - Wikipedia

Years ago I watched a nature documentary about a trek into a remote desert for some animal research project or other. The camera crew had to use camels as transport due to the terrain. The domestic camels were all female, and some were in season. A wild male camel was attracted and started following the expedition. They filmed him roaring and bucking and kicking in the direction of the people and the female camels, and it was a terrifying sight - he was huge and definitely acting murderous. They had to shoot him because they didn’t want their brains kicked out. In the last image of him, he was being carved up for steaks.