If you are an athlete, do you kneel/protest at a game or no?

Would you do it?

Would you kneel or protest, or would you stand for the national anthem or just stay VERY quiet regarding social activism on police brutality and racism towards minorities?

Why don’t you just come right out and say what you’re thinking instead of all these bullshit questions?

What would YOU do? And why?

Well, pre-COVID I took a knee during the televised national anthem in a bar.

Not that I have or would desire to attend a game where this would occur, but in the past I would stand when the anthem was played (no hand over heart or salute or whatever). I’d probably do that again. Just like in the unlikely event I was in a church I wouldn’t deliberately insult the people who are believers in that faith.

You can’t ask this question in one of your dozen other threads on the subject?

National anthems should not be played at games, period.

National anthems should not be played at games, period.

And City Council meetings (and the like) should not start with the Pledge of Allegiance. (Public schools should also stop the practice).

Save the anthem for the end of the game, see how many people respect that!

Save the anthem for the end of the game, see how many people respect that!

That being said, I wish the anthem would go away altogether. It only belongs at international sporting events where it’s one nation vs. another. When both teams are American, what’s the point?

If I felt I truly had an option, I’d definitely stand. I’d hope that the coach would remind us that we’re there to play and there’s plenty of time to be a social justice warrior after the game.

If the coach or the league made us do it, I would. We have to do all sorts of stupid crap in life that we don’t want to do.

Well, as it stands now, I always sing this version at sporting events. I’d probably continue doing that.

If I’m an athlete, and they insist on playing the anthem, I take a knee.

I think the national anthem should not be played.

But the right wing is obsessed with kneeling.

But the right wing is obsessed with kneeling.

Some are, some aren’t. But the right wing is going to vote Republican anyway, kneeling or no kneeling.

For the (international) cricket Test match here in the UK this week, the players all kneeled at the start: 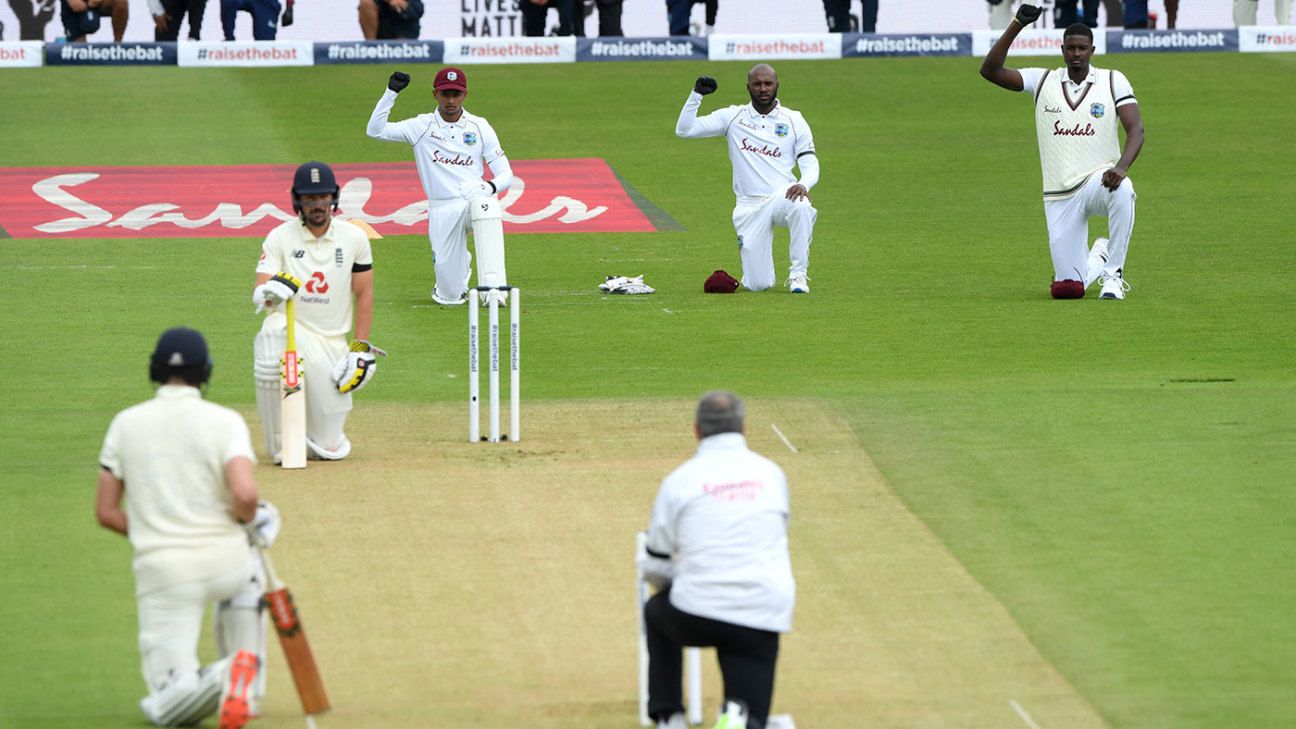 The do not usually. They play the national anthems for these games, and the players generally stand and sing.

The situation in the US sports at the moment is very different from any situation I’m likely to ever find myself in, but I like to think I’d protest.

BTW, watching the game now, I note that both England and WI players all have “Black Lives Matter” on their collars. There has been no controversy that I’ve seen about this.

Right. Staying in the locker room during the anthem is the only way you don’t end up making a statement, but even that’s like pleading the 5th. Choosing not to say anything is still a choice.

Kaepernik was not wrong. He mystified a few people at first, but that sparked curiosity and brought more attention to the cause. Ultimately a good thing.