This has happened twice this week. Try to turn on the car and it acts like the battery is completely dead. Trying to get the key out it will not turn back past the 1st position, i.e. when you insert the key and turn to the first click, and so I cannot get the key out of the ignition. The first time I thought it was not reading that the car was in park so I hit the shifter with my hand and it worked. Today nothing worked and then I noticed the interior lights were not on. Dammit that battery is 6 months old. As a quick test I shut the door and opened it again and the lights come on and the ignition works perfectly. Key turns, car starts, etc. I had the door open again - same failure. Close and open, success.

Given the symptoms of the key turning and not starting the car then not turning back all the way to be able to take the key out, is there any reason it wouldn’t be the ignition switch (or whatever the cylinder is that you turn to make car go)?

What model and year of car?

Your ignition switch is definitely futzed.

It’s also possible that you have more than one issue. They might even be related. For example, a short in your ignition may have routed too much current through some of the wiring and you might now have a bad ground connection somewhere, or maybe a relay isn’t getting enough current to reliably switch on.

I would start with the ignition switch and see where that gets you.

I would start with the ignition switch and see where that gets you.

Sounds like I need both the starter switch and the ignition lock cylinder or just one of them?

It might not be your ignition switch. The Envoy has a key solenoid whose purpose is to make sure you are in park before it releases the key. I was thinking that something mechanical in the switch was broken, but it may be that the loss of electrical power is preventing this solenoid from activating, which in turn is preventing you from turning the key all the way and removing it.

So now that I know what vehicle you have and how the ignition switch works, I’m thinking it’s more likely a bad connection somewhere and being unable to remove the key is a symptom and not the cause.

How handy are you with a multimeter?

Is it possible the driver side door switch has a problem? If you spritz WD-40 in there and punch it a couple dozen times could that make any difference?

I was thinking that something mechanical in the switch was broken, but it may be that the loss of electrical power is preventing this solenoid from activating, which in turn is preventing you from turning the key all the way and removing it.

I was guessing the same thing. Before even pulling out the multimeter I’d check the NHTSA site for technical service bulletins and see if it is a recognized issue. Electrical problems are hell to trace so any help you can get up front may save you from chasing your tail.

I ordered the ignition switch and ignition lock cylinder. I figure it’s $50 and I can install it myself and first point of diagnosis. Plus it being so intermittent it smells of something starting to fail. If it were a bad solenoid, would that look like a complete loss of electricity when starting the car?

The other reason is: yeah there is something funny but it is not the feel. When it failed on Monday I looked at the key and when I saw the cylinder my thought was, “Did someone break in here and try to pull the lock out and steal my car?”

This video shows you the solenoid switch by the gear shift and how it works. 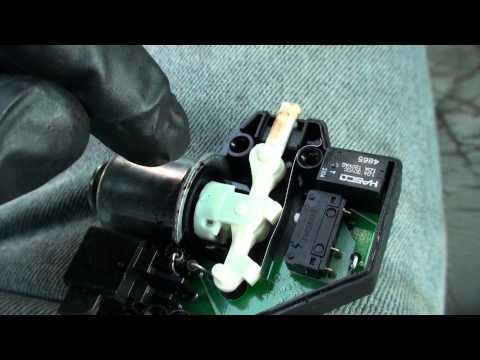 If these repairs don’t work I’ll look at replacing the solenoid and the relay. After Saturday, I only need the Envoy to start one time (on Wednesday) After that I’m off for the Summer and have time to diagnose and repair.

The fact that the lights were off, you shut and opened the door, and then the power came back, makes me think it is worth checking the electrical connections. Make sure the battery connections are tight and clean off any corrosion. Also check the ground connection at the firewall, as those are known to come loose, too.

Definitely could be the ignition and all that, but I always like to start with the easy checks.

Solved!
Checked the battery and the negative terminal was covered in copper sulfate. Went to my bench and a 8mm box wrench and few shots of battery cleaner later the truck runs perfectly. I’m still going to replace the ignition lock cylinder (and ignition switch while I’m there) because Mrs Cad bent the shit out of the key trying to get the ignition back into the lock position.

Sounds like I need both the starter switch and the ignition lock cylinder or just one of them?

I wasn’t having any electrical problems per se but it was getting more and more difficult to extract the key. I took it to the garage where I usually trade, they said they’d call the locksmith guy who usually takes care of that stuff. It took him a week to get there because he was backed up then he said he didn’t want to touch it either so the garage recommended another place that specializes in electric work and oh, no charge for looking at it.

I don’t know if the locksmith took the works apart or not but it’s been working fine since then. Being cheap I have not taken it to the other place.