Those are both fairly stock expressions you’ll hear in all sorts of media even today, and if in a comedic setting usually are accompanied by a visual bit.

I’m wondering though if both those phrases started off as “naked” and were simply “toned down” to make them more appealing to family friendly material. Also it makes the creators jobs a hell of a lot more easier if they’re putting it in a sitcom.

Or is it the opposite, they started off tame and I’m just being a pervert by thinking of everyone naked.

When I was in high school, we had nude swimming class (boys only). Underwear barely counts.

I always heard it as imagining your audience naked. Not a trick that I ever had to use, since I don’t get stage fright. But it sounds like an awful idea to me, leading to a variety of reactions depending on the state of the audience. So I suspect it is toned down.

Does anyone have dreams of being anywhere in their underwear? I don’t. Naked, yes. And wonder if there is a correlation of what you wear to bed.

I’ve taught at the college level, given conference presentations, etc.

I’ve got way too much on my mind to think of anything else at all, let alone something pointless like nudity. It seems like an incredibly unhelpful suggestion.

When I see it offered in movies and TV I assume by default the person saying it is trying to sabotage the speaker.

I think there was a joke about that on Friends, when Phoebe was hired to perform songs at the public library–

Phoebe: If I get nervous, I’ll just imagine the audience naked.
Boss: No, don’t. The last guy we had got fired for doing that.

I’ve always heard both scenarios as “naked,” not “in underwear.” And in fact, I’ve had the “naked at school” dream myself, so it’s a real thing.

I think the logic behind “imagine the audience naked,” is that by imagining them as somehow vulnerable and embarrassed, you rid yourself of the idea that the audience has any power over you. You remind yourself that they’re just people, just like you are.

I am lucky, I guess, that I’ve always been able to speak in front of people without getting too nervous, so I’ve never had to resort to “tricks” like this. So I have no idea whether it would work. Plus, as the Friends gag is getting at, the connotation of “imagining someone naked” tends to be a lot creepier these days than was probably originally intended.

According to this blog, the practice of imagining the audience naked is attributed to Winston Churchill, in a book published in 1970. An earlier reference appears in a French novel from 1932, but this is with regard to confronting intimidating individuals like a priest rather than an audience.

I would think later references to the audience being in their underwear is a toned down version of these.

Huh. I first hear the phrase in the 1970s and assumed that it was one of those old phrases that had been around forever, and was not a recent invention.

Poking around on google ngram seems to confirm the 1970 origin. Aside from an unrelated blip in the early 1800s, the use of “imagine them naked” does indeed start around 1970.

It seems to have spread remarkably quickly.

Maidenform ran a long series of ads from the 50s to the 70s that had the catch phrase, "I dreamed I … in my Maidenform bra. 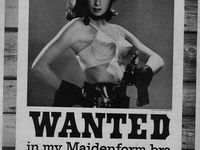 That might have initiated the change from naked to underwear. Or it may be that it was playing on the common meme and naked came later. But underwear wold have have to been around by then I’d think.

I occasionally had the “naked out in public” dream when I was younger, but in college I fell into the lake in the dead of winter. Soaked up to my rib cage, I got to the girls’ dorms with my girlfriend (whom I’d been walking back to said dorms with when I fell in the lake), and waited in the parlors (the only part I could be in at that time of day) wearing only her bedspread for an hour and a half or so while she ran my clothes through the laundry.

That put a stop to that recurring dream.

I always dream of being semi-nude at school and losing bits of clothing through out the day. I think maybe i should have been a stripper. I missed my true calling, it seems.

After having the dream many times I realized that nobody ever noticed I was nekkid, so I stopped caring.