I have a couple of questions.

First, Assuming they’re decently made and have good reviews,do these generally work pretty well at allowing you to use non-induction ready pots and pans?

Secondly, and I’m pretty sure I already know the answer but you never can tell until you ask: does their construction somehow allow them to push the heat further out than the base induction plate?

I worded that badly I’m sure… Situation: induction plate is maybe six inches. Favorite cast-iron skillet is probably 10 inches. Induction will heat it quite hot but only in that center zone directly over the plate, Leaving a lot of skillet real estate barely warm and not very useful. Do diffusers by way of some kind of special voodoo, push it all the way out to the edges even if the plate is smaller than that?

Thank you for your assistance.

(Induction mavens are welcome and I’d love to ask a few questions because I really don’t understand these damn things. But I do love them because there’s no open flame and because they can get insanely hot. But I don’t really get the settings and what not but that’s not my worry right now my worry is pushing that heat as widely as I can and being able to use pots and pans currently sitting idle.)

Your cast iron skillet should be fine on an induction “burner”. I have a portable induction unit and it works with my cast iron pans. If it’s magnetic it should work.

Probably not the best for high heat like frying. Here’s a good review with testing of various combinations. My take from the review is "get a smaller cast-iron skillet. 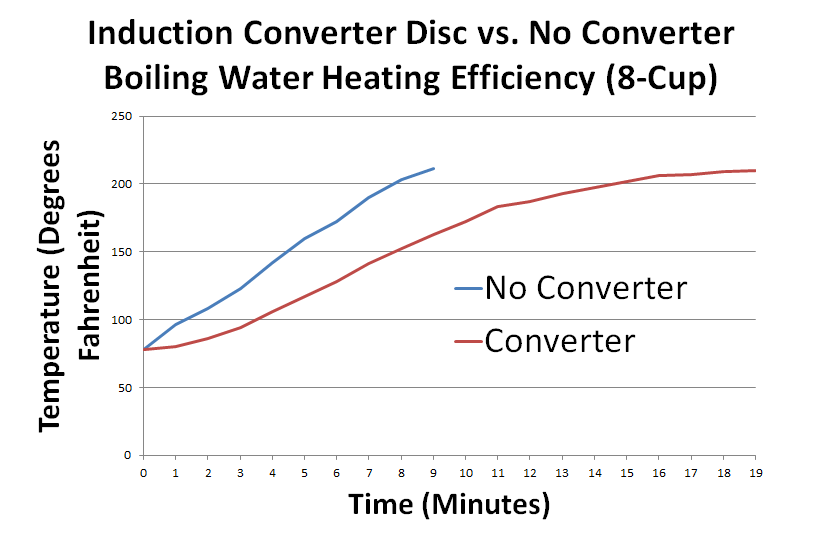 Situation: induction plate is maybe six inches. Favorite cast-iron skillet is probably 10 inches. Induction will heat it quite hot but only in that center zone directly over the plate, Leaving a lot of skillet real estate barely warm and not very useful. Do diffusers by way of some kind of special voodoo, push it all the way out to the edges even if the plate is smaller than that?

Some heat will spread out sideways in the diffuser plate, due to thermal conduction, but it will be nowhere near enough to significantly increase the heated area. This is because a thin conductor has a high surface area to volume ratio, and heat losses on the periphery due to radiation and convection overwhelm any localised heat input. Heat will also spread sideways due to thermal conduction in your skillet base, and as you’ve found, this heat doesn’t usefully spread very far.

Induction heating can be used on any electrically conductive material, not just ferritic materials like iron and steel, although the heater design generally has to be tailored to the specific heated susceptor material. I’ve designed systems for induction-heating aluminium and it works very well. Induction heating systems can be viewed as an electrical transformer, where the heating coil is the transformer primary winding, and the susceptor (e.g., your skillet) is the secondary winding. It doesn’t matter that the susceptor isn’t actually constructed out of an actual coil as the primary coil will “see” it as a short-circuited single-turn coil with a low (but non-zero) electrical resistance. AC current is passed through the heater coil, and this is electromagnetically-coupled to the electrically-conductive susceptor, where the magnetic field generates an electrical current, which causes resistive heating due to simple I-squared-R. This happens for all electrically-conductive susceptors (including graphite, which is used to make induction-heated crucibles). In ferritic materials (i.e., those containing magnetic iron) there is an additional very strong heating effect due to hysteresis, where heat is generated due to the alternating magnetic field constantly flipping the magnetic dipoles.

Stoid, if you are very attached to your skillet and really want to use it in an induction system, you might have some success by using an additional stand-alone heater. I know these are available for woks; there might be some out there optimised for larger diameter pots, pans and skillets.

If it’s magnetic it should work.

It being magnetic has nothing to do with it-- What matters is that it’s conductive. Aluminum would work better than iron or steel, and copper better yet.

It being magnetic has nothing to do with it-- What matters is that it’s conductive. Aluminum would work better than iron or steel, and copper better yet.

Has to be magnetic, OP is concerned with heating area - he knows cast iron works.

Aluminum alone does not work on an induction stove because of the material’s magnetic and electrical properties. An aluminum pan must contain an iron insert in its …

Some of my newer aluminum pans are marked as induction capable. They have an insert in the aluminum bottom that is magnetic.

First, thank you so much for giving me a direct clear answer to my query. You told me exactly what I needed to know in perfectly comprehensible language. I love that.

You also generously offered all kinds of extra information that went right over my head. but now it’s there for anybody else who might want it which is a great thing and it also tells me how you are clearly the expert or an expert and that’s a great thing to know.

So far I’ve just fumbled along hitting the on button in the plus or minus temperature buttons, completely disregarding the preheats and pre-settings and wattage and everything else. The most primitive possible use of an exceptionally advanced form of a very primitive tool: heat. I approach it like neanderthal “ make hot”
“No hot”.

Well the answers before may be correct, but for wrong reason, or at least I found it unclear.

Diffusers are for using it for simmering, like slow cooking, without the hotspot. This allows you to use the small hotplates for simmering, so that the larger hotplate is available …

The amount of heat that the hotplate can deliver, its power, is limited , so that it can really only work for frying temperatures with a frying pan of about the same size as the hotplate. You know, 7" skillet on a 6" hotplate is reasonable, right ? They limit the power to that much, or else people would have their hotplates too hot and be seriously dangerous… eg exploding spills, melting handles, covering the hotplate in molten copper, that sort of thing.

Taking the power suitable to create frying temperatures in the small area, and putting it into a much larger area means the maximum possible temperature has to reduce… Area is related to the square … if you double the diameter of the frying pan, it has ( due to area = pi R^2 ) four times the area of the proper size frying pan…