Instrux Req: How to start a Samsung Galaxy Note 4

I have inherited a Samsung Galaxy Note 4 from its previous owner.

I’m smartphone-stupid but: I have a charging cable that fits this thing, and I kind of know it’s an Android device.

I charged it up to 95% and then figured that was sufficient that it ought to behave like a cell phone. Unplugged the charging cable. The icon of a green battery showing 95% disappeared. I press the power button.

// hmm I hit SOME combo of keys and it booted. Little keys along the edge, I think, in combo with the main white button. Don’t know what I actually did though, so still interested in answers.
What I’m expecting: “Yo, you gotta enter your password” --> would have to contact prev owner

What happens: absolutely nothing

What does one do to make these thingies turn on?

ETA: by “power button” I’m referring to a white oval button prominently located below the screen.

I’m not sure what you mean by it booted but nothing happened.

Just to add, press and hold down the power button for several seconds until the screen lights up.

And you should not need a password if it was properly factory reset. No one should give someone else a cell phone without doing a factory reset, even to a family member.

They probably shouldn’t but they did.

Next question: My existing phone account is on a flip phone; it’s a T-Mobile account, a “pay as you go” account. The Samsung Galaxy definitely works with T-Mobile, since that’s what shows up when it boots (previous owner must’ve had a T Mobile acct). Can I haul the two phones over to the nearest T-mobile dealership and have them move my account into the Galaxy, or does having a smart phone require a different plan or something? (Or is that kind of question something that has a different answer from different service vendors?)

Wow. Having to physically take your phones to a service center to switch the accounts is ancient history. Like, when it was last done dinosaurs still roamed the Earth. It should be as simple as swapping a SIM card or at worst calling Team Obile.

Do you have the password? If so is there a reason you do not want to factory reset? Factory reset, insert SIM card and sign into google if you have an account.

You might brick the phone if you reset without the password. Been awhile since I had a Note 4. Good phone back in the day.

Y’all are talking to me like you think I’ve ever owned a smartphone.

I have a SIM card in my ZTE flip-phone. I think I know how to open the ZTE. Not so much the Samsung. You saying I just switch out the SIM cards?

What’s google got to do with anything?

I have a SIM card in my ZTE flip-phone. I think I know how to open the ZTE. Not so much the Samsung. You saying I just switch out the SIM cards?

When you turn on the device, does it ask for a password? That is the one you need.

The SIM card is in the battery compartment, behind the battery. There may also be memory card next to it. 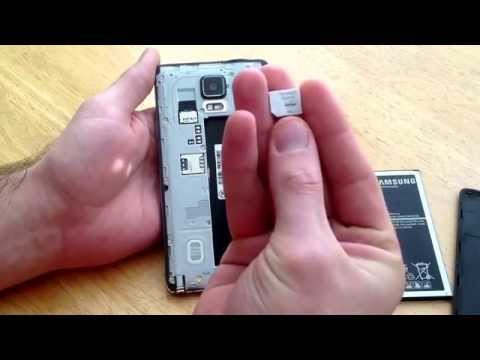 It doesn’t ask for a password when I boot it. Does that imply that the previous owner chose against password protection or saved a blank password?

Thanks for the link /photo. Yeah, it looks like the same littel card that’s in the flip phone.

He either erased the password or never had one. I’d do a hard reboot to reset the phone, but its OK to go ahead and try your SIM card in it and see if you can call someone.

Do you have a data plan carried over from your flip phone? If so you can log into google and go to the app store and start downloading apps.

If the Note had a password then when you turned it on you would see a number/letter key pad on the face of the phone, like the dialing key pad on a phone, where you would then enter the password. Since you don’t see that there is no password set on the phone. You do not have to set a password if you don’t want to.

If you do want to set a password you go into settings and screen lock. I have a Note 3.

Now I’ve done a factory reset and entered my basic settings! It appears to be working!

You’re on your way.
Congrats.