My wife is getting me a new phone for Valentines day, and while I won’t get it for a few weeks, I have to decide between an iPhone 4, and an HTC Thunderbolt.

Dopers, give me pros and cons. Those of you that are techy, compare the two.

I’m not looking for Apple fanboys or Android fanboys to mindlessly shout their prefered fetish… I want to know WHY. “Because it’s an iPhone!” is not an answer, nor is “Android, fuck Apple!”.

I currently have an Eris, and am well overdue for an upgrade.

Note: I would not use either for work purposes. My phone is strictly for personal… listening to music while I work out or walk around, games, social networking, and some apps for things like working out, keeping track of my calories, that sort of thing.

I’ve got the Thunderbolt equivalent on Sprint and I love the hell out of it.

Have you ever gotten a chance to look at it side by side with an iPhone?

I have compared the stats for the two, but so much of it doesn’t make much sense to me…

I’m not looking for Apple fanboys or Android fanboys…

You know, you’re no fun at all.

I know, but really, if I want a thread full of “ZOMG iPhone or you suck!” I can just open the facebook post I made on the subject.

I don’t have either, but I currently have an Android phone (and have since the first was released on Tmobile (G1) and I also have an iPad.

I love Android, very much, and there is a lot to love about it. I am also a huge fan of the HTC phones. However, that said: the more I own an iPad, the more I really want an iPhone. When it comes time to switch it will be between the iPhone and Sprint’s EVO.

It looks like the specs on the EVO match the Thunderbolt almost perfectly, so I can tell you that the EVO is a beautiful phone, if you don’t mind a phone that is large and has a bit of a heft to it. I happen to like that.

The iPhone because it’s smaller, will also be lighter. 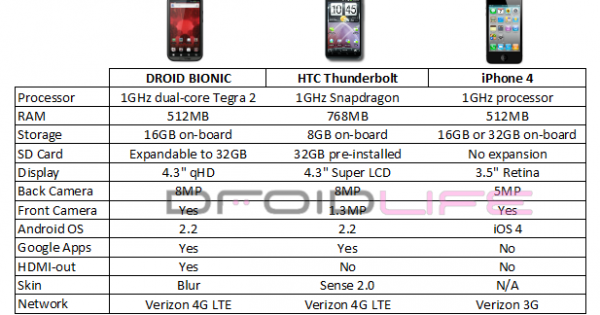 We just wanted to toss this chart out there to give you an idea of how to compare the i*hone 4 on Verizon to the top 4G LTE devices (DROID BIONIC and HTC Thunderbolt) that we should be seeing in just a few months. Other than the fact that the i*hone...

That page breaks down the specs and it really depends on what you’re planning on doing with it.

The T’bolt has more RAM, but the iPhone has more built-in storage. However, the Bolt will be expandable to 32 GB (and my even come pre-installed with a 32gb card), which means it will have more storage than the iPhone by either 24gb or 8gb depending on which model iPhone you choose.

The Bolt also has a better back camera and presumably better front camera as well, which could be an important deciding factor (and my wind up being what sways me in one direction or the other).

I don’t think you’ll regret either choice, you just need to know what you want to do with it primarily and then pick from there.

I will say that the Apple app market has definite edge over the Android market, but I believe that edge is shrinking, and will continue to do so.

You can find both App Markets online if you want to peek around and see if that helps your decision any.

. I posted the attached thread just a couple of days ago. Might be some useful info there for you (we haven’t decided yet).

I’ve owned both an iPhone and currently an Android phone, so I’ll give you my opinion on both:

iPhone Pros
[ul]
[li]Very smooth, intuitive interface.[/li][li]More apps available, including some that I really miss (Scrabble…seriously, why is there no official Scrabble on Android!?)[/li][li]If you already use iTunes for your music management, it is obviously very easy to sync.[/li][li]Any apps you’ve already paid for on another iOS device (like your iPad) you can use on the iPhone and not pay or again, as long as you use the same iTunes account.[/li][li]It looks pretty. I like the look of the iPhone 4 a LOT. I’m sick to death of what most other smartphones look like (including all the previous iPhone versions.) They all remind me of the worst of car design in the 90’s…everything has to have a nice, smooth line, and they all look alike. Sometimes more squarish can be cool![/ul][/li]
iPhone cons
[ul]
[li]Everything is so locked down. Even if you jailbreak it, there are still things you can’t easily do (like add a new SMS noise…seriously, why doesn’t Apple let you add a custom SMS ringtone?!)[/li][li]The hardware is also more locked down. Almost all Android phones use the micro USB standard charger, so you can easily but three or four extra cords and AC/car chargers and it will cost like $10 total. Apple’s connector makes even the cheap knock-off cables more expensive.[/li][li]Fixed storage. While it starts off larger, you can’t add any more to it. [/li][li]Forced use of iTunes. If you don’t like iTunes, it’s harder and more annoying to use an alternative for music and movies.[/li][li]No flash support, and the way Apple and Adobe have been going at it, don’t hold your breath for it.[/li][/ul]

Android Pros
[ul]
[li]Open. You can customize a lot of the software and interface right out of the box, and if you ‘root’ it, you have even more customization.[/li][li]Widgets. Related to the above, but deserve their own mention. Simply by unlocking my phone, and not having to even open an app, I have a widget telling my the weather for the week, a text message widget that shows the body of my most recent text, an EXACT percentage for my battery (that is, an actual area on my screen that says “sixty-three percent”, not that small icon in the corner that could be anywhere from 30%-80%, who knows?), and a little widget that turns wifi on and off without having to slog through three pages of settings.[/li][li]Tethering. I can hook my phone up through USB, Bluetooth, or my making an ad-hoc wireless network and connect my laptop to the internet through the phone’s data connection. Without paying an extra monthly fee (on my phone, I had to root it to do this, but some phones don’t require it.) (I’m also to understand that the AT&T iPhone will get official tethering soon to compete with the Verizon one.)[/li][li]Seamless integration of gmail with the built-in gmail app.[/li][li]Can use micro SD cards to increase storage space.[/li][li]Flash support in the web browser.[/ul][/li]
Android cons:
[ul]
[li]Less apps.[/li][li]The openness. It’s good, in that it provides a lot of customization, but bad because each manufacturer and carrier adds their own crap in there. Though HTC is the best with their ‘launcher/software’, and I’m not sure how AT&T is with carrier bloatware, but it can’t be as bad as Verizon’s, at least. It also results in large delays with major software updates as each manufacturer and carrier has to tweak the main OS a little bit for their phones, though again, HTC is the best when it comes to this.[/li][li]No centralized way to manage music and movies, if you like iTunes. There isn’t an all-encompassing equivalent for Android. There are several different music and video apps you can download, and a few ones you can get for your desktop client to manage them as well, but it’s not super simple like it is for an iPhone. However, if you’re like me and don’t really care about managing music, you can just drag and drop a whole mess of MP3’s and you’re good to go.[/ul][/li]
Overall I vastly prefer Android. I think it’s few shortcomings compared to iOS are more than made up for by it’s strengths.

I very much like to drag and drop my music into my phone, no problem.

Android cons:
[ul]
[li]No centralized way to manage music and movies, if you like iTunes. There isn’t an all-encompassing equivalent for Android. There are several different music and video apps you can download, and a few ones you can get for your desktop client to manage them as well, but it’s not super simple like it is for an iPhone. However, if you’re like me and don’t really care about managing music, you can just drag and drop a whole mess of MP3’s and you’re good to go.[/li][/ul]

One word: DoubleTwist. Let’s you sync your iTunes library, music, videos, the works, and has a single interface that allows you to play both, and manage your playlists. My wife has it on her Incredible. It’s great.

I’m currently salivating over the Bionic, even though I’ve only had my Droid X for about 6 weeks.