iPods (Shuffles and Classic) not working with iTunes (Win 10)?

I’m at wit’s end, which is saying something.

I have an iPod, and two iPod Shuffles that used to connect to iTunes on my desktop, under Windows 10. About a year ago, or so, iTunes just quit recognizing them when I plugged them into my USB ports. I have tried a litany of solutions through many pages there are many more, including a few of Apple’s “support” pages.

I am convinced this is some sort of “planned obsolecense” plot, but the pisser is, is that at some point in the past few years of owning this desktop, things worked fine! Now, all I’m stuck with is that Windows recognizes each iPod Classic/Shuffle as a ‘USB Device’ just fine, but iTunes (seemingly in later rev 12.8+) does not recognize these devices. Admittedly, I’m a little sick and tired of hearing “Thunderstruck” over and over again on the same morning jog playlists.

Have any of you had the same issue, and did you fix it outside of the same, repetetive “reinstall drivers/reinstall iTunes” schtick?

Tripler
While I could run 2.0 with a desktop strapped to my back, I am too cheap to buy the extension cords.

I hate Apple & iTunes, they’re notorious for these little tricks Sorry, I had to get that out of the way

Serious bit, why not just use your phone and give up on the iPods? You’ve done far more than should have been needed to keep a device connected to Win 10. Your phone probably has a greater capacity than the iPod does. Should take care of the issue.

Oh! Good question, and something I should have pointed out earlier. My iPhone is a “company” phone, and I don’t keep a whole lot of personal stuff on it for privacy/security reasons. I try to keep my personal/professional electronic existence compartmentalized.

Besides that, the iPods all still work just fine on their own!! Even my 1st Gen Shuffle (from 2005) puts out a hearty beat. I just can’t update the songs via the desktop.

Tripler
I’m limited in when/how I can hang on the SDMB. I’m sure some of you are grateful.

You don’t need itunes to work with an iPod Shuffle. You can just copy the music folders there and run an appropriate script to update the track database stored on the device. 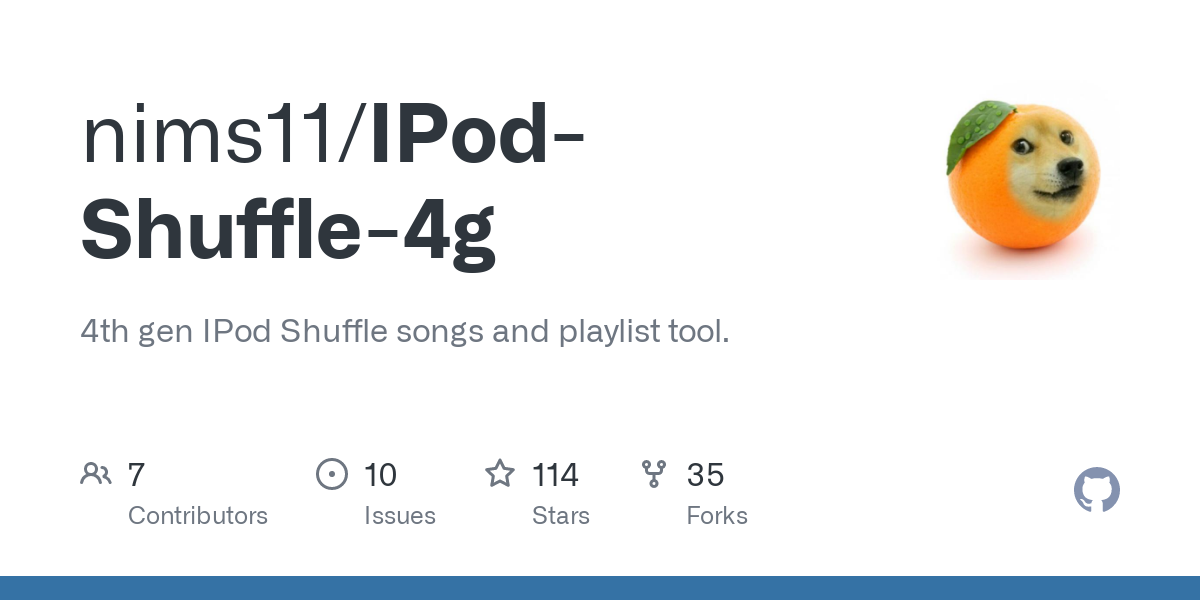 seems to be relatively maintained and will work with newer shuffles as well as older ones.

On the first-generation ipod Shuffle I still have around somewhere, there is a Windows batch file and a minimal interpreter that runs the script just by clicking on it. For an ipod that old (first two generations) you can get the standalone application from http://shuffle-db.sourceforge.net/

Holy mackerel, that seems like a long workaround, but something I might be forced to do if I can’t get the original method to work.

On a quick glance, are those to be run on Linux?

Tripler
Not good with computers.

Try removing your existing iTunes and install an older version: Apple - Support - Downloads . This link has versions going back to 2010. Crossing fingers one of them resolves your problem.

Not necessarily. I have an iPhone 11 with 64 GB and a fairly recent iPod touch with 128GB. The iPod was pretty cheap; it would have cost a lot more to upgrade the phone.

I think the usual idea these days is that people will offload a lot of their music to the cloud, or using a music streaming service.

I know. I can’t get into that for two reasons:

I know. I can’t get into that for two reasons:

I’m not arguing against what you’re doing. I was just giving the rationale for why having a large amount of storage isn’t pushed more. That’s why I didn’t quote you, to signal that I wasn’t just responding to you, but just using your post as a launching point.

Do you have a spare USB hub? I’ve heard that connecting through a hub sometimes works. Not a great solution but something to try.

When my iPod classic stopped updating automatically on iTunes 5 or so years ago, I actually communicated with someone from iTunes to try to fix it (after failing in all my other attempts). I was informed that Apple no longer supported the iPod classic so it would no longer automatically update at iTunes.

I can still update it manually there, though. I just have to open each specific podcast, such as “This American Life”, click on the podcast I want, & drag it over into my iPod. Then I have to open up the iPod and individually delete the podcast episodes I don’t want anymore. A PITA, but since my smartphone is provided to me by my employer, I don’t want to use it for personal stuff. Sigh.

I don’t know why @Tripler’s iTunes doesn’t recognize his iPod anymore, though. I guess I’m lucky my iTunes just looks at my iPod with great disdain and effectively says “I’m not touching that, if you want something done with it, YOU do it”.

Can someone show this thread to my wife and kids, and tell them I’m not just an old fogey, and that there are good reasons that I haven’t updated iOS or iTunes in ages?

I love the fact that iTunes, my ancient iPhone, and my iPod Nano all just work effortlessly! In yo’ face, Apple… (well, actually, it’s Apple’s engineers that made this all work so well in the first place…)

Do you have a spare USB hub? I’ve heard that connecting through a hub sometimes works. Not a great solution but something to try.

Yeah, this is one of the things I did try. I used to have a company-sponsored pedometer (Virgin Pulse) that wouldn’t read through a USB 3.0 port, so I bought a cheap-o Amazon USB Hub, and it worked for the pedometer. I tried the iPods through it too. But, it’s worth trying again. . .

Try removing your existing iTunes and install an older version: Apple - Support - Downloads . This link has versions going back to 2010. Crossing fingers one of them resolves your problem.

Thanks for that link! I’d tried reinstalling slightly earlier* releases, but I will try to ‘reach back’ a little further.

Tripler
I wish there was a MS-DOS v2.11 version – that’s about my speed.

Holy mackerel, that seems like a long workaround, but something I might be forced to do if I can’t get the original method to work.

On a quick glance, are those to be run on Linux?

The script requires Python 3, which should be installable as a package from the Microsoft Store if you don’t already have it enabled. Then you can run Python scripts from the Command Prompt or PowerShell (or by clicking on them, but that will not work for this script, see below)

To install the optional metadata support, from a command prompt you can run pip install mutagen. The script that you download from github is called ipod-shuffle-4g.py . You need to give it the path to the iPod root directory as an argument; it does not locate it automatically. (Not sure why, that is annoying, I can try to fix it if necessary).

Please let me know if you need more instructions…

Thanks for that link! I’d tried reinstalling slightly earlier * releases, but I will try to ‘reach back’ a little further.

Definitely worth a try

You should be all about running scripts from the command line, then

I was kinda pissed off when command lines went away. I remember using CD-ROM-based programs from the command line with Windows 95. . .

In an update, I fired up the Laptop-a-saurus running Win 7, with iTunes 12.10.2.3 running (older version). I do not connect this dinosaur of a machine to the Internet, what with Win 7 being non-supported anymore. But, I plugged in one ‘control’ specimen of a Shuffle, and it popped up and recognized it immediately. On Laptop-a-saurus, I ran a diagnostic, and found that “iPod Helper service” was installed there, which is noteworthy because it’s not installed on this desktop’s version of iTunes.

Tripler
I mourn the loss of being able to play LucasArts’ “X-Wing.”

A bit of an aside here, but nothing went away; Windows has both the Command Prompt (which superficially resembles the default MS-DOS shell) and PowerShell. Also, arbitrary Linux programs run under Windows Subsystem for Linux.

I could never get DOSBox to work properly. That’ll be my next project. . . But back to the our breaking story:

12.1.3.6 installed okay, but wouldn’t open because the “[library/indexes] were built with a later version of iTunes.”

So, using the aforelinked link, I downloaded 2019’s version 12.10.11.2 and fired it up. Crossing my fingers, I plugged in my two iPod Shuffles (one atta time) – and both work! iTunes is recognizing them, and thankfully can replace Thunderstruck with Verdi’s Dias Irae. On this success, I immediately unclicked “Automatically update iTunes.”

We’ll see how well things go on my run. I may have to throw Beethoven’s Ninth in there to pick up the pace a little bit. . .

Tripler
I find this a case study in that “Newer is not necessarily better.”

Glad you found a version that worked! This is exactly why I tend to disable automatic updates on software that I depend on and which doesn’t have security concerns. iTunes would definitely be on my list of such.

I was actually concerned the change was in Windows 10 and not in iTunes. That would have made thing a lot more difficult to handle. (Not updating your OS would definitely have security concerns.)