Is it illegal anywhere to impersonate a woman?

WFMU brings me tales of the most interesting people:

When he wasn’t sitting in the slammer for “lewd performance” or the now remarkable charge of “impersonating a woman,” [Ray] Bourbon was mailing letters of desperate agony to Variety. The June 3, 1970 edition featured a startling plea buried on page fifty-one, sandwiched between news of Jackie Mason’s new production firm and a publicity photo of Homer and Jethro.

Makes me think that there was a crime, called “impersonating a woman”, the elements of which were (someone the courts called) a man dressing up as a woman where the stiffs could see. No intent to defraud, no prostitution, just some drag.

Is that still a specific, named offense anywhere? Was there some great Supreme Court case that makes it not a valid law under American jurisdictions anymore?

Crossdressing was illegal for a long time. Patrons at lesbian bars would sometimes have to wear their jeans backwards in the 60s (since women’s pants zipped up the backs) to avoid harassment by the police: 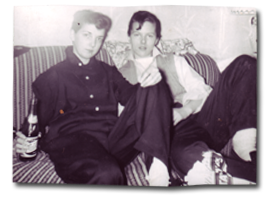 I certainly can’t think of any decision that would have invalidated such laws and local ordinances. They’re bound to still be on the books in a lot of places.

Crossdressing was illegal for a long time. Patrons at lesbian bars would sometimes have to wear their jeans backwards in the 60s (since women’s pants zipped up the backs) to avoid harassment by the police:
http://lostwomynsspace.blogspot.com/2011/03/lost-found-chicago.html
I would imagine things were at least as tough for men.

That is very interesting.

Are you asking us to guess whether you are going to ask for a cite?

Are you asking us to guess whether you are going to ask for a cite?

Indeed. Just skimming his statement made my mind parse that as “Am I going to ask for a cite?”

IIRC, Toronto in the 70’s was famous for the gay Halloween parade (from one gay bar to another). The logic of the parade (admittedly, mostly word of mouth although I think I read it in a newspaper too) was that it was the one day “dressing up” was legal since it was an accepted custom to wear costumes on Halloween.

The rest of the time, the charge was “wearing a disguise”. This was a charge that could be laid against someone who disguised their appearance, usually to avoid identification during a crime. It was fairly broad (sorry) so not just ski masks or lone ranger masks, but fake mustaches, wigs, etc. would qualify. Of course, you did not have to actually commit a crime. Often, like “possession of burglary tools” it was something the police could lay if they caught you before the actual crime.

Presumably the macho police of the time were not above using the system for gay-bashing to harass someone wanting to enjoy their lifestyle. They evetually were raked over the coals for standing by during egg-throwing and other gay-bashing during one Halloween parade in the 1980’s IIRC, and since then have enforced the laws to protect the parade.

Then there’s the practical consideration - you could likely be charged as a perv for using the wrong public toilet too while dressed up.

Crossdressing was illegal for a long time. Patrons at lesbian bars would sometimes have to wear their jeans backwards in the 60s (since women’s pants zipped up the backs) to avoid harassment by the police:
http://lostwomynsspace.blogspot.com/2011/03/lost-found-chicago.html
I would imagine things were at least as tough for men.

I can remember my mother wearing pants she bought at Bergdorf-Goodmans that zipped in front, and a few pair that zipped up the side [those were more dressy and she didn’t want a fly in front look. I would really love to find the grey wool ones, they were fantastic looking.] My mother did not dress out of the mens department of anywhere. I had jeans as playclothes in the 60s as I refused to wear the cute little frilly girly clothes unless pretty much forced to, and my jeans zipped in front, and we shopped for me at Sibleys in Rochester, in the girls department. My jeans were not the same as my brother’s jeans. I can’t remember the brand names, but his had rivets and mine didn’t. Mine had flowers embroidered on the back pockets. They were definitely made with girl playclothes in mind.

[and of course I am discussing her clothing back in the 60s ;)]

Now perhaps in one small area of the country like Alabama or someplace it was illegal, but we are talking New York State in the 1960s for my mother.

Joan of Arc was convicted of heresy for wearing men’s clothing (contrary to some Bible rule), among other things. According to Wikipedia, execution for heresy required a repeat offense, so when she put mens’ clothing back on again after some English lord tried to rape her in prison, she was doubly guilty. She was burned at the stake for this.

Peter Tatchell: This African country claims to be a democracy but its persecution of gay people is pure tyranny.

Well, maybe at the Olympics…

I think impersonating a woman would be illegal under certain circumstances. For instance, a guy dresses as a woman to gain entry (for purposes of titillation) to female-only places such as washrooms, shower facilities, etc.

I remember watching a cartoon (not sure if it was a movie or a tv show, but I believe it was Disney), where an anthropomorphic male cartoon character was arrested for wearing a Scottish kilt, as the cop considered that to be crossdressing (because it’s a skirt, duh), so it seems that the cartoon acknowledged the idea that crossdressing could be construed as a crime.

I remember reading an interview once by a female transvestite recalling her experiences earlier in the twentieth century. She said that there had been laws setting a maximum amount of articles of men’s clothing a woman could wear - I believe it was four. So a woman could wear a man’s hat and necktie and a pair of shoes and it would just be considered a fashion choice. But if she then put on one more article of male clothing, she’d have crossed the line and she could be arrested for dressing up as a man.

I think impersonating a woman would be illegal under certain circumstances. For instance, a guy dresses as a woman to gain entry (for purposes of titillation) to female-only places such as washrooms, shower facilities, etc.

I assume that would fall under public mischief or something. Can you be charged with trespassing if you are male and go into a “women only” facility? Peeoping tom statute?

It’s also possible that the “4 articles of clothing” was a rule of thumb for prosecution in some jurisdiction set through precedent or custom - if you had more than X articles on, you were trying to disguise yourself by dressing as a member of the opposite sex.

I also remember side-zippers (and rear zippers) were and still are found on women’s pants from back in the 60’s, but I never noted that the did NOT have front zippers. Women’s pants just had a lot more options. With no front centre seam, I guess the camel-toe was more obvious.

A reference where citations outweigh anecdotes.

A mukhannath (transgender person) is the one (“male”) who carries in his movements, in his appearance and in his language the characteristics of a woman. There are two types; the first is the one in whom these characteristics are innate, he did not put them on by himself, and therein is no guilt, no blame and no shame, as long as he does not perform any (illicit) act or exploit it for money (prostitution etc.). The second type acts like a woman out of immoral purposes and he is the sinner and blameworthy.[40]

Iran’s health insurance pays for sex changes. The reassigned gender is officially recognized on official documentation, including birth certificates. It’s next to only Thailand in the number of sexual reassignment surgery.